Roger Wilco Journal Entry 2: “Once again I’ve had to save Xenon from certain destruction, but this time i fear I may never be in a position to be rewarded for my efforts. After figuring out how to fly the shuttle and attempt my escape from Labion, I inadvertently ended up straight back in the grasp of Vohaul, drawn into his asteroid by tractor beams. I managed to avoid the numerous droids and traps within his base, and eventually found myself standing before the horrendous man (if you can call him that) himself. Before I could do anything to stop him from unleashing his salesman clones upon an unsuspecting Xenon population, he used some sort of beam to shrink me down to the size of a mouse. Thankfully I’d earlier picked up a glass cutter, which allowed me to escape the glass casing he placed me in, and I then shut down his life support system, ending his miserable existence. I was fortunate enough to find the code to deactivate the launch of the salesmen, then escaped in a pod before the whole place went into meltdown. Xenon is safe, but with no oxygen left in this pod, I’ve been forced to enter the sleep chamber to survive. I write in this journal with little hope of ever being found, and will likely never.......zzzzzzz” 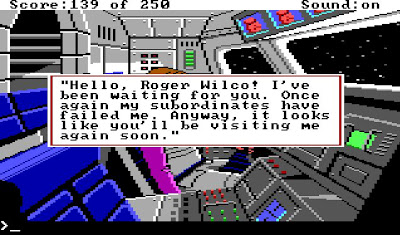 At the end of last post I was about to escape Labion. That didn't exactly work out...

As expected, it only took me another hour to finish Space Quest II. As soon as I arrived on Vohaul’s asteroid, it all came flooding back to me and the rest of the game was fairly straight forward (well, I stuffed up one bit, but more on that later). It’s pretty strange that Vohaul would pull your ship into his lair and then allow you to get out and walk around unopposed, but I guess that’s just part of the parodying fun that is Space Quest. Not only does he continually tell you what his plans are, he also leaves you pretty much unguarded on more than one occasion so you can make your escape. It all reminds me of Dr Evil: “I have an even better idea. I'm going to place him in an easily escapable situation involving an overly elaborate and exotic death.” 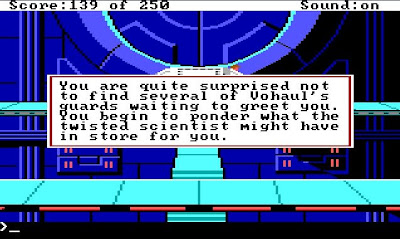 Speaking of an overly-elaborate and exotic death, the majority of the remainder of the game is collecting items from the four available levels (strangely there’s no level two, only one, three, four and five) to be able to get past a couple of traps to reach Vohaul himself. The first is actually quite cool! At the bottom of a stairway, I suddenly found myself trapped by walls on all sides, with the ground slowly opening up to reveal a pool of acid. If you haven’t got the plunger from one of the janitor storerooms (I can’t remember which level held which items), you’re in for a nasty, painful death. If you do have it, using the plunger on the wall allows Roger to pull himself up, and can then wait for the floor to move back into position. I really like this puzzle as it temporarily raises the urgency while demanding some logic to resolve. 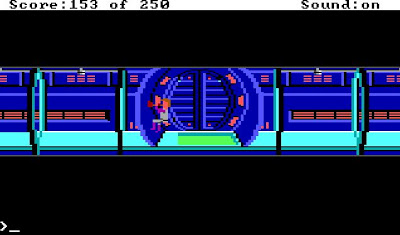 The second trap was also quite neat. At either end of a corridor were robots that became active as soon as I approached them, qickly pursuing and terminating me. The items I had remaining in my inventory reminded me of the solution, but I do recall solving it unassisted when I first played through the game. I noticed that the corridor had one thing that differentiated it from all the others I’d negotiated to this point. It had smoke detectors along the ceiling! Given that I had a lighter and a basket in my inventory, I suddenly remembered that the way to proceed was to burn some paper in the basket underneath one of the detectors, which causes water to spray down and fry the robots at both ends of the corridor. I didn’t have any paper on me though, and suddenly it clicked what the bathroom was for on level four. I’d spent some time there earlier but hadn’t found anything of use. I went back up, got some paper, then went back down and lit the fire. 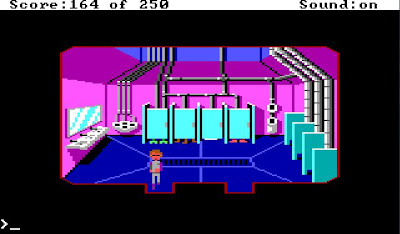 I knew the bathroom had to be good for something!

I’ve previously criticised Space Quest II for the alien kissing scene and the consequences to the player down the track. For those who haven’t played the game, on level five on the asteroid, an alien (just like in the movie Alien) comes out of a doorway and chases you. If it catches you, rather than killing you, it gives you a big sloppy kiss. The first time I played the game, I thought this was all rather humorous, but continued on, assuming it was just a big joke. After making significant progress towards the end of the game, Roger suddenly lurched about, and a small alien burst out of his chest, killing him in the process. As awesome as this occurrence was, and it was awesome, I was forced to reload my game back a fair way, avoided the alien kiss, and then repeated everything I’d done since. In my memory, that was about an hour’s game time, which is obviously a pretty bitchy thing for the game to put the player through. In reality, it simply can’t have been that long! By the time you come across the alien, there’s not all that much of the game left to go, so I can only assume my memory has exaggerated that little story, and the chest bursting scene probably occurs only a short period after the initial contact (maybe ten to fifteen minutes). 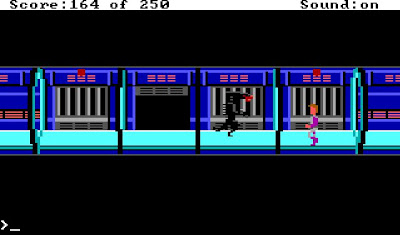 They mostly come at night...mostly.

Passing the acid pool and the robots granted me access to Vohaul’s chamber, where he was busy preparing to launch his salesman clones to Xenon. From here on in the puzzle solutions were fairly obvious. He used some sort of beam to shrink me down to minuscule size and placed me in a glass jar as a decoration. It’s here that I used yet another item found in one of the janitor closets, the glass cutter, to get out. Climbing through a vent on the wall took me straight into Vohaul’s life support system, where there was only one option available to me. I turned it off, killing the hideous bastard within moments. I then used the computer system to fire the beam again, bringing me back to my normal size. I didn’t feel this was particularly climactic to be honest. The end result is exactly the way you’d expect it to be, but there was very little challenge in making it happen. I didn’t really need to use my brain and simply followed the only paths available to me at the time. 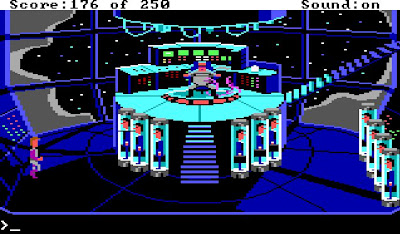 The first time I played through this section today, after killing Vohaul I simply dusted myself off, got myself an escape pod and left, totally forgetting about his salesman plot! I was able to finish the game, but received only 203 points with a message basically mocking my poor performance. That didn’t sit too well with me, so I restored back to his death and went about things the right way. To deactivate the launch countdown, I needed a code, which I located by searching Vohaul’s body (it’s written on the back of his hand). Getting to the escape pod is another case of droid evading, which is much easier to accomplish when running the game at slow speed again (typing commands to press the button to open the hatch and then again to enter the pod while the droid is closing in on you is next to impossible at faster speeds). The end game message was much more positive this time around and I ended up with 223 points out of the possible 250. 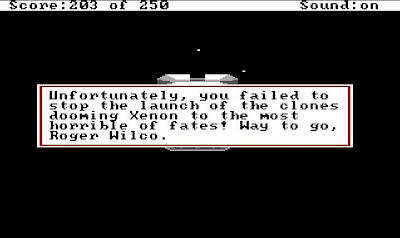 How to finish a game while losing at the same time

I’ve checked out a walkthrough tonight to see where the missing 27 points are. The only two things I can see that I didn’t do were “hide behind the tree to avoid the guard when first arriving on Labion” and “use the supporter to throw a rock at the guard at the landing platform”. In both cases I simply avoided the guards altogether and therefore got no points for it at all. I can’t imagine that would make up the total deficit, so if anyone has spotted something they know can be done differently, then please comment. Overall I found Space Quest II to be a pretty enjoyable little romp that doesn’t really do anything to make itself stand out from the pack. It’s at times pretty funny, which is certainly a bonus, but the plot is fairly lacking and there’s actually not a lot that happens when you look back at it in hindsight. It should be interesting to see what score it ends up with when I apply the PISSED rating system to it. 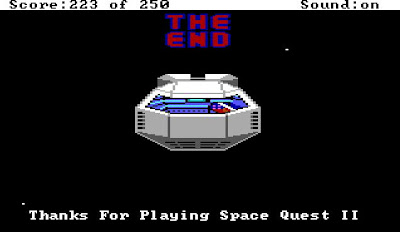 Having the protagonist left in cryosleep is yet another Alien reference