It's time rate Captain Blood, the first game that I've abandoned prior to completion. From that statement alone, it's probably apparent already that it's not going to do very well. The question is: will it go one lower than Mortville Manor?

Puzzles and Solvability
I’m not going to beat around the bush here. The “puzzles” in Captain Blood are incredibly challenging yet utterly boring! Most of the challenge comes from the communication system being overcomplicated to a ridiculous level, the aliens refusing to answer direct questions unless asked umpteen times, and badly chosen planet and alien names that make differentiating them from the mire of nonsense all but impossible. Add to this that the game often asks you to recall a piece of information that didn’t seem important three hours ago to be able to proceed, and you’ve got a game that will cause hair loss and anxiety attacks rather than entertainment and relaxation. If you take all of the above out of Captain Blood, what you’re left with is “Go to Planet X and speak to Alien Y” about twenty times in a row to complete the game. In fact, if the game had a LucasArts interface I reckon I would have found the five duplicates and got my vital fluids back in less than fifteen minutes. Instead, I spent nine hours trying to decipher complete garbage and having my perfectly logical (and in many cases correct) questions ignored.
Rating: 1 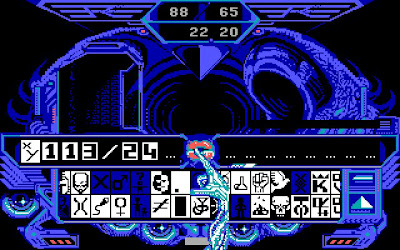 Interface and Inventory
Well there’s no inventory (which is one of the reasons why Captain Blood probably shouldn’t be considered an adventure game), so it’s only interface we’re discussing here. It’s a mixed bag really. Flying the OORXX’s is surprisingly easy and actually enjoyable until you’ve done it fifty times (no fault of the interface), so that should be commended I guess. But the rest of the interface is pretty clunky, with the buttons on the main console screens badly represented and not labelled. This isn’t a problem after you get used to it, but I found myself having to check the manual quite a bit in the early stages of the game just to see what the buttons did. As for the communication console, well I think I’ve made my feelings about that pretty clear. Having 150 buttons (with a scroll bar to view them all) makes for a stupendously difficult interface, particularly when it’s rarely very clear what it is you supposed to say next. The majority of these buttons seem to be used to form the large number of silly planet and alien names rather than for actual communication. It’s also worth mentioning that the save / restore feature, while being a novel way of stopping the player from continually saving their game before experimenting or restoring every time things don’t go their way, is painful indeed!
Rating: 2 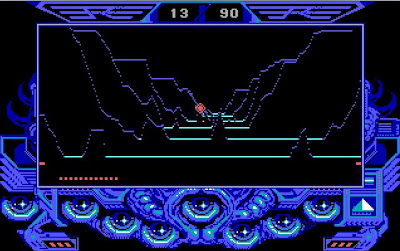 Flying is fun for about five minutes. It's a shame you have to do over and over again!

Story and Setting
The back-story of Captain Blood is certainly one of the most intriguing, not to mention bizarre, I’ve ever come across. Read the Captain Blood novella (found at http://www.oldskool.org/shrines/captainblood/ark1.htm) to see what I mean, but I wouldn’t recommend doing so after taking acid or the like. You may not recover! Putting the player into the shoes of a game creator that’s been sucked into his own game is cool, but unfortunately, the unique starting point for the game is all but irrelevant once you actually start playing. As mentioned in the Puzzles and Solvability section, Captain Blood is just one fetch mission after another, and since finding anything out about the duplicates is in most cases close to impossible, the actual story progresses at a snail’s pace (in my case it never actually did). Maybe I’d feel a bit different about it if I’d found some of the duplicates on my own or come across the universal nudist known as Torka, but the walkthroughs I’ve since read don’t leave me with the impression that the quality of narrative improves at any stage. I’m giving it points for the back-story and setting, but that’s all.
Rating: 2 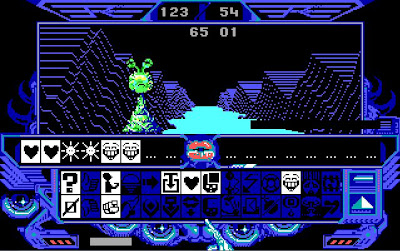 Sound and Graphics
The sound of Captain Blood is very minimal. At least it is in the DOS version of the game. I believe that the Atari ST version was fairly groundbreaking on this front, with actual audible languages created to accompany the many symbols for each alien race. But I can only rate what I played, which was limited to a dodgy intro theme and a few blips and blops here and there. Even the OORXX guiding and landing sections are completely silent (unless you hit something for which you experience a slight crunch)! The graphics are not too bad I guess and artist Didier Bouchon definitely managed to create a unique look and feel for the game. The aliens are fairly well represented too, but have only basic animations. The planets look pretty nice and both the hyperspace and OORXX guiding graphics are adequate. Still, the whole thing is extremely repetitive after a while, as you can probably tell by the repeition in my screenshots, so it's only worthy of a 4.
Rating: 4 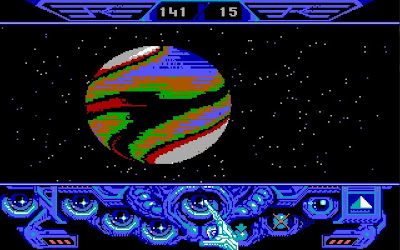 Environment and Atmosphere
I won’t deny it! Captain Blood initially drew me in and made me want to play it. I can only assume that this evil allure is what has given the game its underground status over the years (there are numerous shrines out there on the interwebz). It really does promise a lot in the opening phases and I felt like if I could only come to grips with the interface and the language, I was in for a treat. It seemed like it was my own inability to play the game rather than its inadequacies that were to blame for my slow progress! As the other categories here will attest, this promise turned out to be false, but it’s interesting to try to figure out what the game did right to give that impression. I think the answer is that there’s something really grand and exciting about travelling through an alien galaxy, landing on planets and communicating with strange beings. The fact that you’re tracking down duplicates of yourself so you can terminate them certainly adds to the appeal. If anything, Captain Blood shows what the possibilities are for truly creative game development, but unfortunately the actual gameplay itself couldn’t live up to the rather fascinating environment. In short, Captain Blood feels like a great game, it just isn’t one!
Rating: 6 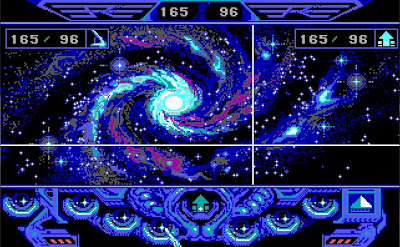 You mean I can visit any planet in the entire galaxy? That's actually quite cool!

Dialogue and Acting
Dialogue? Laugh Laugh Curse Insult! It’s true that communicating with various alien races would be extremely difficult. But surely no-one out there thinks the idea of an Alien Conversation Simulation game would actually be fun do they? Hmmm, now that I think about it, that might be interesting if done well, but it’s not here! “Missile Sex Croolis-Ulv Curse. Me Search Danger. Danger = Sex Spirit Laugh Laugh Curse. Me Know Danger Missile. Danger Not Fear Me Kill Danger. Female Not Danger Me Like Danger.” This is the sort of thing that Howdy Prison said to me over and over when I was asking him for information that I only knew he had because Lars-Erik (he’s a reader, not an alien, at least I don’t think he is) told me. Is it creative? Yes! Is it unique? Yes! Is it useful or fun? Hell no! It’s infuriating! One of the other big problems is the names of characters and planets. It would be really obvious that someone called “Roger” is an alien or even “Pooky the Swift”, but with messages like “Scientist Know Me Small Scientist”, “Crazy Know Great Nonsense” and “Me Say Information Migrax Missile Brave”, it’s difficult to know when you’re being told a name or if you’re supposed to form an intelligible sentence out of it.
Rating: 1 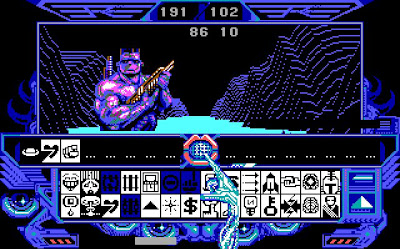 "Planet Kill You" - Sounds like a wonderful holiday destination 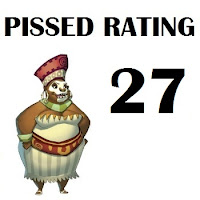 I actually doubted whether I was going to find a game that could match the 27 I gave Mortville Manor, but only four games later, I’ve found one! It’s interesting that both games get really similar scores in all categories, yet would appear to be totally different games on the back of the box. They both suffer from terrible dialogue, confusing storylines and dodgy interfaces, yet both were initially appealing due to gripping atmosphere and nice graphics. I’m really very thankful for Sierra right now as once again I get to move on from this tough slog of a week with one of their comfortable and more than likely enjoyable escapes. This time it’s Gold Rush!
Posted by The Trickster at 17:26