Missed Classic: The Worm in Paradise - The Brave New World


Let’s begin with some general remarks. My starting inventory consisted of tradclads - some sort of overalls - badge with a string of seven colours (I’ll get back to that later), what seems to be a tattoo, but is actually an integrated LCD display showing the time and my credit account, and a collar.

The time system in the game is a bit different from what we are used to. There are ten hours in a day and each hour consists of a hundred minutes. Curfew begins around 00:00, and you are meant to sleep during it.

The collar was in fact a kind of transmitter that automatically credited my bank account when I did something illegal. I could break the collar and remove it, but when a fuzbots (a local police force) noticed me walking around without one, they fined me and issued a new collar. I noticed quickly that the solution was to wear the broken collar, which was enough to fool the bots.

The fuzbots are an irritating part of the game. They appear randomly, and if you happen to do something criminal, they fine you. Among finable acts are walking around naked, walking around after curfew and carrying almost anything, which is especially maddening in an adventure game, where you are supposed to procure everything that is not bolted down. The challenge is even greater because of cleaning droids, who in almost every room automatically pick up items you drop and hand them back to you.

So, you are constantly losing credits, and if you are about to hit negative numbers, you are taken to the hospital to sell your spare organs. This medical procedure adds a hefty sum to your bank account, but if you again run out of money, next time they’ll take the rest of your organs. Game over. 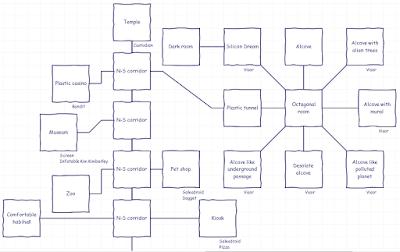 At the end of the previous session I had just noted that the game thus far had been a simulation. Indeed, investigating my surroundings, I found a total of seven alcoves with different simulated dreams to watch, although only of few sentences long. Most of them were propaganda about evil aliens or about the drab life in the polluted Earth.

Outside this virtual theater I found: 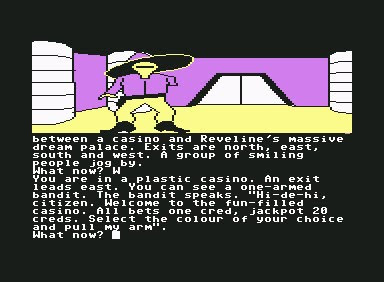 General look of the city

Level 9 producers have a knack for making intricate and seemingly complex maps, which still have a believable internal logic. This time, it’s all about roundabouts, as the Enoch is built around four of them.

As you can see from the map, the traffic in the roundabouts and the connecting lanes is mostly one-directional. The roundabout to which I got from the pleasure dome was the central one in the sense that it connected to all the rest of the roundabouts.

The western roundabout seemed like a mere filler, since the only place I could go there - an ornate plaza - had nothing to do. The northern roundabout led to Eden Transport system, which I’ll discuss more a bit later

The southern roundabout had the most things to do: 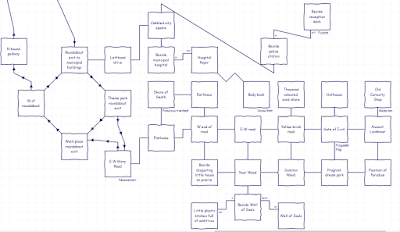 Theme park was actually an area familiar from the previous game. The basic idea was that each screen of the area represented some piece of fiction. Since I did it with the last game, I won’t go through all of these screens, but most of them were related to fantasy or scifi classics, although I found also Little House in the Prairie. 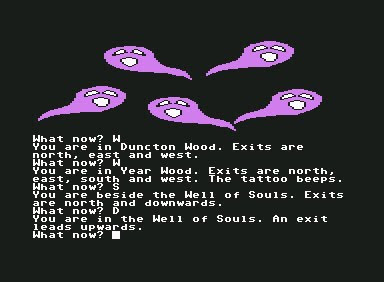 Although most of the theme park seemed to serve no reason, there were couple of interesting points:
Eden Transport system 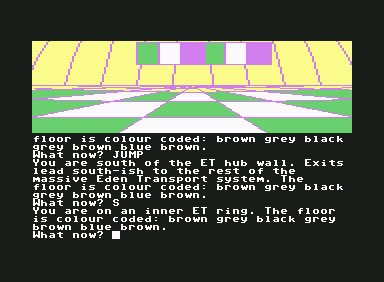 You might remember from my review of Snowball  that the sleepership was made out of discs, arranged like dartboards or vinyls, with concentric circles marked by different colour codes. You might have guessed that the two items with colour codes (badge and brooch) represent addresses in similar discs. Indeed, this is what the fancy sounding Eden Transport system just is.

Now, in Snowball traversing this set of discs was tolerable, because you had to spend so little time there. Here, on the other hand, I am moving regularly through it. I noticed that the official clue sheet provided the players a listing of a BASIC program indicating the moves you had to take from the center of the Transport System to the address with the desired code. This seems a desperate solution to a problem that shouldn’t have existed in the first place.

There are two commands that ease moving through the system. If you write SAY EXIT, you get immediately to the place where you can get out of the disc where you are. SAY HOME, which incidentally works in all rooms not inside some building, summons two robots, who instantly carry you to your front door on a sedan chair.

The colour code on my badge proved to be the address of my home. It was a place where droids couldn’t come, so I could use it to stash all the items I had picked up. I eventually found out that with the command SAY BED I could summon from the wall of my apartment a bed for sleeping and that with the command SAY ON I could turn a TV on (in living room) or turn a shower on (in bathroom). Regular showering appears to be a condition for robots serving you.

The colour code in the brooch I found in the wallet left by the socialist was the address of another habihome. It had a different decoration, but otherwise I haven’t yet found anything of interest there.

Keeping the TV on, I heard a few commercials, which indicated the address of few stores:


In addition to the stores, I learned from TV the address to the jobcentre, which was evidently a satire of British employment policy - the government declared that almost everyone had a job, while the jobcentre really had almost no jobs available (note that all the stores and offices are managed by robots, and there’s only one designated workplace in the whole city).

When I talked to the jobcentre droid, it offered me first YTS and YOP courses. These were real projects in Thacherite Britain (Youth Training Scheme and Youth Opportunities Program), meant for providing young people an access to the working life. In the game, these courses are useless - you literally watch paint dry.

If I insisted, the droid gave me a work card. Taking the card into the workplace, I could spend few hours as a clerk, earning some money in the process. 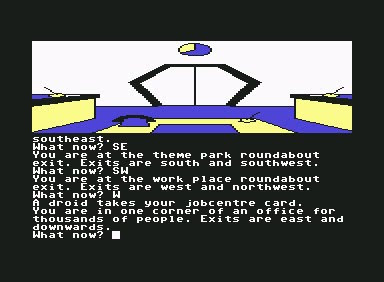 I could also reject the clerk job. The next (and it appears to be final) offer was a position of labourer. This time I was meant to direct a waldroid. After using it for couple of hours to stack boxes, I had the opportunity to take it to the city. The one thing of interest I could use it for was to take it to the hardware store and take the valve, which the store handed to droids for free. Returning the waldroid to the workplace ended the job. 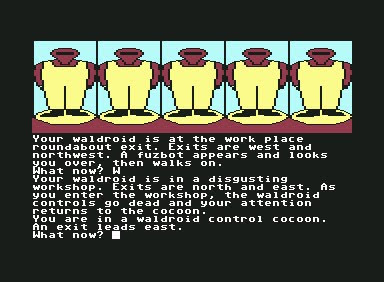 That’s as far as I’ve got. I am somewhat worried that I have no clear idea of my goal in the game or of the motivation of my character. I guess my best bet now is to try to gather some money for the more expensive items in the shops and see where I could use them.

Email ThisBlogThis!Share to TwitterShare to FacebookShare to Pinterest
Labels: 1985, Ilmari, Missed Classic, The Worm in Paradise