Since we don’t want to exhaust Joe with his marathon, we’ve given him some time off. In the meantime, I’ll take the opportunity to continue the story of Level 9, a text adventure company founded by the Austin brothers and known affectionately as the British Infocom (yes, this is going to be a sideshow). As those familiar with my earlier reviews of Level 9 games might remember, I have been less than enthusiastic about their games. We’ll see if Snowball fares any better. At least it is a change from their earlier, Tolkien-themed works and foreshadows nicely Joe’s upcoming Starcross-posts.


The plot of the so-called Middle Earth trilogy was almost non-existent and the supposed connection to Tolkien’s works was tenuous. Snowball significantly improves this sad state of affairs by giving us a manual with a detailed background story and an interesting tale of what the future might look like.

Let’s begin with the geopolitical summary of the world around 2195. It is no surprise that the world is ruled by superpowers and that two of these are China and US, although it is a bit weird to hear the latter called an Empire.

Names of two other superpowers bring back memories from eighties: USSR (better known to the world as Soviet Union) and EEC (what we nowadays call European Union). Considering the current events of the world, it is ironic to read from the manual that England “is a minor part of the EEC”.

But I guess it’s just another ruse

There’s also a fifth superpower, called Pacific. Since Australia is the biggest landmass around that area, I guess this means that they got some delusions of grandeur Down Under.

Within the five superpowers, which are neither true democracies nor dictatorships, people live in luxury. For instance, in England, “minor part of the EEC”, people live out of tourism and Experience Industry. Yes, apparently billions of world population are willing to pay up for British adventure games (no matter what Red Dwarf predicts, this bit seems like a wish fulfillment of the producers). For the rest of the world - the so-called Free Nations (the former Third World) - the future is not as rosy:

No significant improvements have taken place in living standards or technological infrastructure, though populations are higher than ever before. Communications are excellent, however. The people know that they are kept in poverty and resent the fact, and ironically this is a major reason for the Free Nations' poor development performance. Other reasons are: proxy wars, wealth disparity combined with ready supplies of weapons, poor infrastructure, reduced world market share due to automation elsewhere, excess imports to ruling cliques, skilldrain, population growth, endemic disease and climatic instability.

But the Big 5 were too busy to deal with such minor considerations. Traditional fuels were running out, and therefore the superpowers built accelerator chains to get raw materials from the asteroid field to make large solar reflectors for Earth’s orbit. Then the scientists finally discovered the secret of fusion power, and all these constructs in space became just a huge pile of scrap metal.

So as not to seem like complete nincompoops, the leaders of the superpowers decided to use the equipment for stellar colonization, because, you know, voters just love science fiction (a bit of wish fulfillment again).

Snowball 9 was one of the EEC sleeper colony ships, sent to planet Eden in Eridani system, where a fleet of robots was already terraforming and building infrastructure for the arrivals. Within the ship traveled also a secret agent Kim Kimberley - one of the earliest female heroes in the genre. The Snowball crafts were fully automated, but if something was to happen to the ship, a trained person, carried without the knowledge of the crew, could be awakened for the necessary repairs. And now in 2304, when it is nearing its destination, something has happened to Snowball 9.

I am pretty sure none of the larger background really matters in the game itself, although the details are quite intricate. In fact, the back cover has quite another selling point.

I know some quite intelligent people get a sort of Zen vibe, when they chart huge and sprawling maps. Personally, I am not one of those people - I couldn’t imagine a more dreary afternoon than one spent in such a dull and mechanical task. My only hope is that most of these rooms are redundant and that there really is no need to do all this dirty work.

As with all the other games by Level 9 thus far, I shall play two versions - a pictureless version with more text, with a BBC emulator, and an updated version with added pictures, with a specifically designed interpreter for Level 9 games. So, let’s begin!

Kim Kimberley reporting 1: “I was born in England, a small part of EEC, on September 29th, 2172 AD, of Jorel Cowans and Alice Kimberley. I was raised by the Hampstead Creche, a peculiar place, set amongst decaying buildings, and heavily reliant on a mix of relationship-engineering, behaviour conditioning and Hell-Fire religion.

Then to the Milton Keynes School of Life; a fine, residential establishment situated (despite its name) in Malta. The staff were, in effect, my family. This was far from unusual, since advances in entertainment and travel, plus the sexual revolution resulting from AI, partho and cloning techniques, made a family upbringing the exception.

I returned to England for National Service before progressing to Oxford - I was not quite bright enough for Cambridge. I was a good student, and established many close relationships, though nothing permanent.

It was during National Service that I was approached, discreetly, to do security work. Initially this simply involved training, and occasional surveillance of possible subversives (Unionists, Americans, members of racial minorities etc), but it soon developed into counter-espionage (e.g. arresting Russians who used the public reference libraries).

And then, when the Snowball project got under way, I was approached to volunteer for the stars. The Snowball craft were as near automatic as possible, and carried a trained crew in case anything went wrong. But suppose something happened to the crew? What was needed were one-or-two trained people who could emerge and take over if something went really wrong. And, with the Snowball 9, it has …”

It all begins in darkness, with the game telling me that Snowball has arrived to its destination star system and would soon be colliding with the star, unless I prevented it. No matter what I tried, the game helpfully pointed out a lever after one turn. Pulling that lever opened up the coffin where I was sleeping. When I got out, the coffin vanished and I found myself in a blue mortuary. 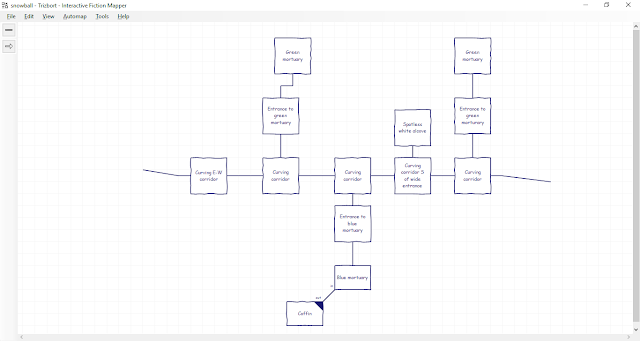 Doing a quick check of the nearby surroundings showed that I most likely won’t have to endure that much mapping. You can see from the small map above the first few rooms of the game. I woke up near a central hub, leading to a spotless white alcove with a complex revival machine and adjacent to an elevator that didn’t work, because I had triggered an alarm when I woke up.

Nightingales were robotic spherical wardens moving around the corridor. If I met them, they injected me with a deadly hypospray. Fortunately, their clanking sound was very audible and I could try to hide away. For some reason, nightingales detected me in blue mortuaries, but green mortuaries were a safe zone - perhaps some colonists are more equal than others? 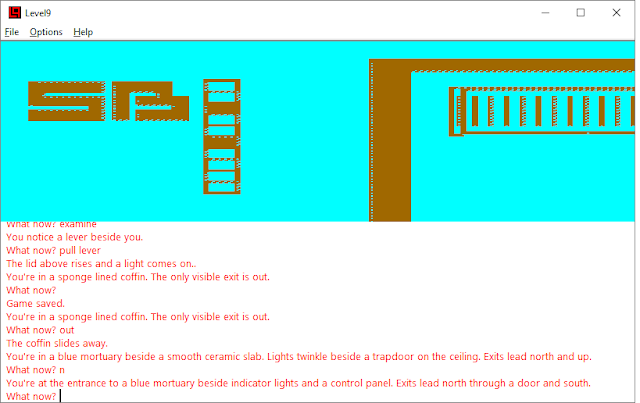 All the mortuaries were marked by a set of three lights, different for each mortuary. Pressing that sequence of light in a panel in the mortuary revealed a coffin. If I took this coffin to the revival machine, the coffin was opened and out came a colonist. So far everyone I’ve tried has been so frightened that they have alerted the nightingales of our presence.

Every mortuary had also a trapdoor leading to some upper level, which I just couldn’t reach. This was a simple problem. If I called a coffin to the mortuary, I could stand on it and reach the trapdoor. By going through it, I found myself in another mortuary.

Yes, I was in a freezer complex, where frozen colonists were stacked on one another, and the level above was just like the level below. I was still making some progress, since on the level above there was no general alarm and I could access the elevator.

I could use the elevator to access the levels I wanted. Most of them were similar to mortuary levels I had already seen, except for the top black level, which contained complex machinery, apparently meant for keeping the colonists frozen.

I could also use the trapdoors to go to the elevator shaft. At the bottom of it was a grimy pit, which contained a toolbox with an adjusting spanner and a ying-yang screwdriver. At the top of the shaft I found a winch room, where I could use the spanner to access a cylindrical ledge. Using this route was still a bit pointless, because the ledge could also be accessed by stairs from the black level.

Let’s pause here for a bit to get our bearings straight. The top black level is explicitly described as toroidal walkway (if you don’t know what a toroid is, picture a doughnut). So, all the levels below should also be toroids or circle around. Why wasn’t this mentioned down below? Simple, the black level is the most innermost of them all and therefore the smallest, so that its shape is more evident to the eye. Why is it then also called the top level? Presumably because all these levels together form a rotating disk, in which we would feel a pull toward the outer rim, which would then feel like being downwards, while the center of the disk would feel like being upwards.

But that’s not all! From the cylindrical ledge I could access a transpex tube going through the centre point of the disk and this tube took me to new freezer disks. What’s transpex, you ask? Apparently it’s some form of plexiglass.

What is most striking is that this whole complex of freezer disks is accessible in the game - no wonder there’s 7000 rooms in the game. I don’t think there’s any particular reason to map all of it, since the pattern is pretty clear, and I am not sure whether to congratulate the producers for their realistic design or call them crazy because of this utterly useless waste of bytes.

Well’ at least my journey through the freezer units was soon over, since at the one end, the transpex tube was attached to an airlock leading to the rest of the Snowball. We’ll see next time what I found there. Before that, don’t forget to guess the score!