Joe Pranevich has just completed another year of gaming (1984) in his Infocom marathon, and before moving on to the challenges of 1985 games, he is planning to write a few additional articles on other interesting things Infocom was doing at that period. It is thus a good opportunity for me continue my own sideshow marathon and tackle another Level 9 game - The Worm in Paradise.


Of all the Level 9 games I’ve played so far, the best has definitely been Snowball, a story of a hijacked sleeper ship Snowball, which undercover agent Kim Kimberly had to save from falling into a star. Its sequel, Return to Eden, couldn’t really decide what the major plot line was - was it about Kim’s escape from Snowball to planet Eden, about the battle of nature of planet Eden and colonizing robots or about Kim fooling the robots and becoming a major of Eden? Still, the series as a whole has been of the highest quality of all the trilogies of Level 9 and I just hope that this final installment will provide a good ending to the story.

Reading the manual, it seems that the game will have a message. The two earlier games have occasionally parodied British bureaucracy, and often the tone of these attempts at humour has not been in line with the general tone of the game. This time, the satirical element appears to be on the forefront, since the player character is explicitly said to live in a benevolent bureaucracy. The planet Eden is described as “truly a paradise for the silent majority, with peace in our time, no crime, full employment (with a fifteen hour week), good housing, more entertainment than anyone could watch etc. etc.” Knowing the tone of the creators, this statement must be taken with a grain of salt.

Timewise, The Worm in Paradise is set couple of generations after the first two games. In the previous game, the protagonist Kim Kimberly ended up as the major of planet Eden and the current major is still called Kim Kimberly - I suppose her name became attached with the position, just like all emperors in ancient Rome were eventually “Caesars”. Assuming the current Kim has the same gender as the first Kim, Eden is then a matriarchy. This is probably no coincidence, since the obvious target of this parody is Thatcherite Britain. Indeed, planet Eden is a true right-wing paradise with no taxes and government still making profits. Where do they get the money, you ask? Simple, almost everything is illegal, and most criminals are not imprisoned, but fined (in case of poor this means essentially that you have to sell your organs for cash). Add in the facts that informants are rewarded, holding information from police is fined and accused is always assumed guilty (demanding a trial means extra fines), and you have a surefire recipe for making justice system into a profitable business.

The government of Eden has also managed to cut the public expenditure by replacing all bureaucrats with robots, who not just work for free, but are also incapable of corruption. In fact, robots do pretty much all the real work and humans are not even needed for colonizing new worlds, since the machines have developed the ability to grow humans on the spot at new planets from ova. Humans are still obliged to do work (this is a Thatcherite utopia after all), which means “extensive ‘training’ schemes” and “many pen-pushing jobs”, with the few good jobs handed out to VIPs. 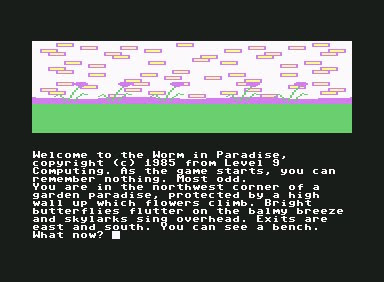 The game itself starts with the most used cliche in gaming industry: I remember nothing. All right, let’s do some mapping them.

The starting area is 3 x 3 square garden, walled off from outside. There’s a locked door and a squirrel I can’t interact with. More interesting are a bench I can move around and a tree I cannot reach. So far, this seems simple: I move the bench near the tree and use it to get an apple. 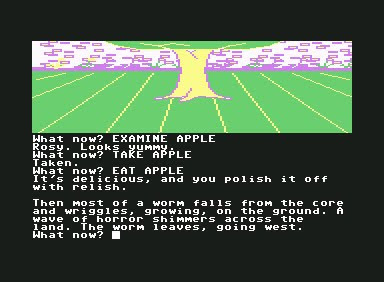 Eating the apple I release a worm that soon grows into a huge monster that smashes a hole in the garden wall. Now I know where the title of the game comes. 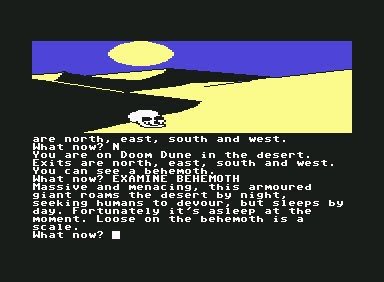 The area outside the garden is a huge desert, limited by a chasm I cannot jump over. The only other major feature is a huge behemoth, with a slightly loose scale. I proceed to do what I can and take the scale, waking the behemoth, who starts to follow me, retribution in its mind. I have only few turns, before the behemoth catches me. There’s a thorn bush nearby, where I can hide to get some more time and then rush to the chasm, where the behemoth tries to grab me and instead slides into the chasm, providing me with a convenient bridge. 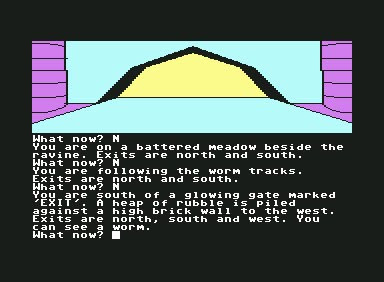 At the other side of the chasm I find the tracks left by the giant earthworm, guarding a door labeled EXIT. The worm tries to spit acid on me, but the scale of behemoth shields me as I step through the door and find everything fading around me - it was all just virtual reality.

This was a bit of a lame way to start the game. Firstly, the surprise was a bit ruined for me, because getting killed in the VR program or taking too long leads to the same conclusion. Secondly, we’ve already faced a similar and a much better scene at the beginning of Spellcasting 201 (I know, I know, The Worm in Paradise is an earlier game). Here, the sequence serves no apparent purpose, but to explain why I don’t remember anything, and even that isn’t spelled out clearly. Oh well, the game has still a chance to pick up the speed. What would you guess for the score of the game?