Missed Classic: The Worm in Paradise - A Golden Handshake

At the end of my last post I planned to try gathering enough money for the more expensive items. After that I noticed that the price of dagget (a mechanical dog) had come down in a couple of days - indeed, it appeared to have lost 100 creds of its price during each day.


The dagget proved to be a versatile thing. It usually followed me everywhere I went. If I wanted to leave it somewhere, I could remove its batpak (fancy name for a battery) and it would wind down in a couple of turns, when its reserve power was all used up. When turned off, dagget could also be used as a container. This gave me an obvious idea - I could use the dagget to hide a helmet from the museum (I had earlier stole a leotard that was another part of the same outfit).

I also found out that the dagget was of use, when I visited the home of the convicted socialist, since it found an invitation behind a wallpaper. It was an invitation to a meeting of secret society at 6. To join the society, I had to bring the marks of Bison, valve and medallion, both of which I had managed to procure earlier.

The invitation didn’t say where the meeting was held, but it wasn’t difficult to figure out that it was the temple where I should be heading. Indeed, the robot that had earlier denied my entrance now let me in. Inside, I firstly found a bar where I could buy a bottle of wine, with a cork. Removing the cork splattered the wine all over, which is probably important for some cunning puzzle. 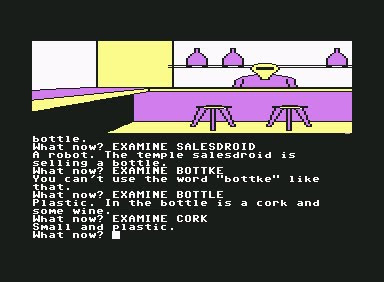 The more important thing was the Bison meeting:

You hold up your tap and bath plug and roll down your left sock in accordance with the ancient ceremony of the watch bisons. They teach you the secret Bison hoofshake which can earn wealth, power and a council job. The assembled bisons cheer and much communion wine is drunk. Eventually, people start to slip away until only you are left, talking to a bowl which you had mistaken for a bison.

Being a part of this freemasonry resembling secret society had its perks. Few of the droids had ended conversation by shaking my hands. With my new “hoofshake”, I could convince the travel agency to sell me a ticket to the Fabulous Riverboat. Even more importantly, the jobcentre now had new opportunities for me. 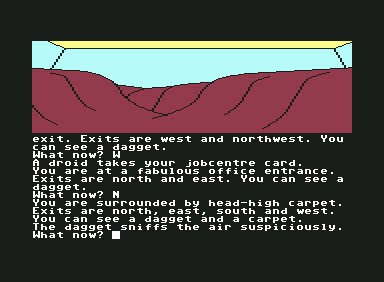 I now had to go to workplace to work as a manager for a day. The only thing stopping me was head-high carpet in the office trying to make my moving difficult. Fortunately, my trusty dagget kept the carpet at bay, letting me enjoy my job and a hefty paycheck.

This was all for the current session. I assume my next task is to explore the area where the Fabulous Riverboat goes. See you in the next post!

Email ThisBlogThis!Share to TwitterShare to FacebookShare to Pinterest
Labels: 1985, Ilmari, Missed Classic, The Worm in Paradise