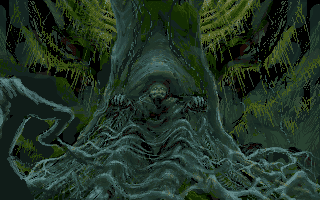 We left off as I had guided the private detective Edward Carnby underneath Derceto, and into the tunnels and chambers beneath. This area was ancient and surely constructed long ago, perhaps by the pirate Eliah Pickford or perhaps some of these were here before he took up residence.

Ahead of me are a series of stone pillars, and newly in my action menu is the “jump” command. A flying bug is somewhat in the way, but a couple of shots from the rifle is enough to remove that obstacle. Now the only problem is a 3D jumping puzzle on a 2D background with a very fiddly control system and an unreliable camera positioning. 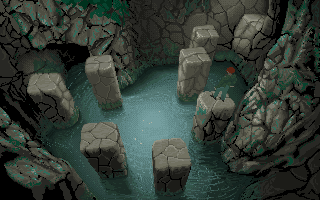 The jumping isn’t actually that hard, but gauging the distance is the tricky part. I actually fell more often due to jumping a little too far, but the fall doesn’t actually harm you. The water breaks your fall I suppose, although it ruins your rifle cartridges and extinguishes your lantern. There’s a shortcut back to the start from here (and to the rooms ahead), but I intend to finish this game fair and square.After making it past these pillars, I found myself back in the roughly carved tunnels, with a choice of two directions to travel into. One lead me to a spiders burrow, the giant creature seemingly impervious to my weapons. Falling into the hole it crawled out of results in an instant death, so that way seems like a dead end. The other path lead me to another puzzle room, with a chest at the end. 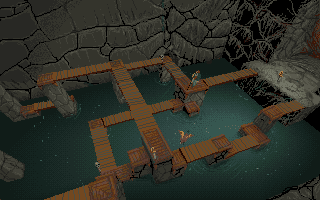 Platforms and bridges criss-crossed this large cavern, with another flying bug causing trouble up ahead. Some of the bridges would collapse and the construction was somewhat maze-like, with maybe only two paths that would lead to the other side. Getting near the water would attract another Deep One, like in the earlier water-filled rooms. After a couple of attempts I made it to the end, and approached the chest.

The big key I got from the ballroom was used to open the chest, which contained two items: A gem and a book. The gem I stored for later, and read the book. It is here that I am taunted by Eliah Pickford, or perhaps should I say Ezechiel Pregzt! The book is written by some servant of his, but somehow he communicated with them. He has lain in wait for someone to come to him, to be consumed by his evil and allowing him to be reborn, using their body as if it were his own. He has been alive in some form for hundreds of years, since before 1620 at least. But immobile in some form, he curses “Damned Yankees” connecting this with the book we had read about the fire during the civil war in 1862. 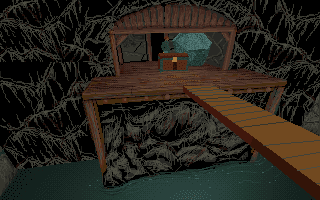 Behind this chest was a large rock, thankfully I was easily able to push this aside and step into the passageways beyond. The rooms beyond were carved from cool stone, and I found myself, after a short drop, with another choice of two paths. One of these paths was blocked by a stone door, requiring an item I did not have. The other lead me to a dark maze. The oil in my lantern was no longer as full as it had been earlier, so I knew I would have to find my way through as quickly as possible. I used a tried and tested method which has worked on many game mazes, which is to generally just hug one wall and follow it around.

I’m not a big fan of mazes in adventure games, and this one would have been relatively trivial if it were not for the small amount of light given by my lantern. A small circle is visible, and the camera is placed at quite a high birds-eye viewpoint. This gives you very little detail to go on, and I was almost unsure that I’d found the door out after much running through corridors. 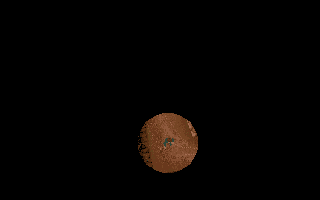 Putting the lantern away to search, the door required something to open, and the gemstone I found in the chest was the key. A little pointless, as far as puzzle design goes, could have at least had the gem glow like in Space Quest II. At long last, I was at the end of the road. I stood on a stone platform overlooking another water-filled room. This time, the cavern contained a strange tree, a tree that looked almost living. I stepped down towards the water, and another Deep One decided to join me in this final act.

This room took me a bit of time to truly get my head around. Initially you are perfectly safe, but as soon as you approach the water the Deep One surfaces to chase you, and the tree (one Eliah Pickford A.K.A. Ezechiel Pregzt) shoots fireballs at you. This put me under a little bit of pressure. I knew fire would be useful to me, after all, his previous body was burned in 1862, no reason to think that wouldn’t be a good thing to do again. 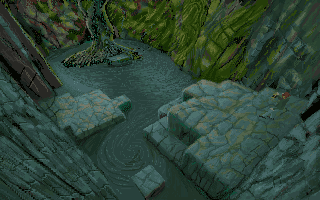 Firstly though, I couldn’t dodge the fireballs and the Deep one reliably enough. Then, when trying to throw my lantern (re-lit with the lighter I got from the smoking room, since my matches were wet), I found that didn’t work. Something else was required. Approaching the tree, I noticed that there was a platform at the base, something you see often when you die in this game, an altar to place a body for E.P.’s resurrection. On this altar was a hook, probably E.P.’s from his previous pirate body.

So, I needed something else. Something I hoped I had picked up earlier, or I would have to do a lot of backtracking. Especially since I’d been saving so often my earliest save games were all in these catacombs. Searching my over-full inventory, the only thing I could think of was the MNAR talisman. It was supposed to provide protection, but it had done precisely nothing to assist me to this point. 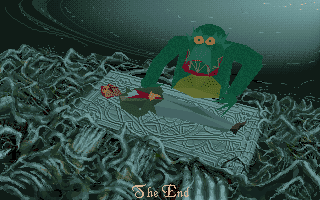 Running and dodging were the key, and in a funny bit of fortune, I managed to time my running to make the fireballs hit the Deep One. Each time this happened though, the Deep One would return after a couple of seconds (or perhaps a new one? It’s not entirely clear). With a plan in mind, I zig-zagged to the altar, took the hook and placed the talisman. All that remained was to make sure the lantern was lit and to throw it at the E.P.-Tree. 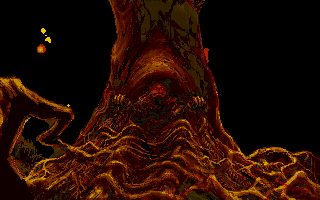 Pickford’s tree erupted in flames, exploding the trunk with an almighty crash. The Deep One vanished back from whence it came, and the cavern shook with fury. I knew I had to get out of there as soon as possible, my last task to leave this place forever. The hook was used to open a door to one side of the chamber, which took me back to before the dark maze (a good thing, since I no longer had a lantern to see by). I decided to avoid the jumping puzzles for the way back, running through the water as fast as I could and climbing onto the platforms where necessary. This helped me skip some sections (and can be used earlier if you don’t fancy jumping, although you’d have to contend with the Deep Ones). 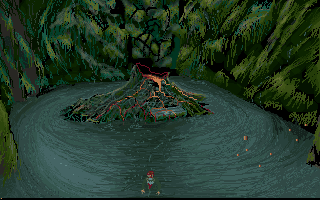 At this point the shaking and falling rocks had stopped, but I wasn’t sure if I had a time limit so I made sure to exit as fast as I was able back through the tunnels and through a crawlspace into the cellar. No rats this time, I took a moment to search the cellar for anything I might have missed and found a most interesting book. It seems the pirate Ezechiel Pregzt was infamous in his day, as the captain of the Astarte. 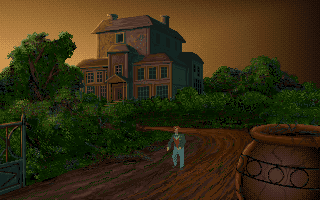 Pregzt was a greedy man it seemed, beyond even other pirates. The book tells of how he hid his treasures (presumably beneath Derceto), and how he murdered those that would get in his way, or reveal his secrets. One such secret being the pact with devilish forces that would grant him eternal life, and a strange fellow by the name of Keith. It seems this Keith was the one who initiated Pregzt into the Cthulhu cult, although I had not found other mention of him or where he came from. 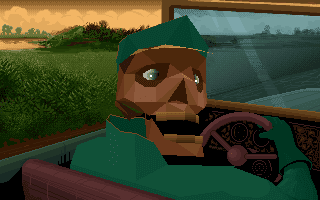 But there will be plenty of time to dwell on books and mysterious tales later, as I made my way to the front doors and to freedom. Edward Carnby actually does a jump for joy as he sees the dawn light and is able to leave this cursed house. Making his way to the front gates, a car pulls up. A fortuitous occurrence indeed! As he is driven away, the driver turns towards us, and laughs… The End?
Posted by Ilmari Jauhiainen at 23:00