Alone in the Dark - History of the House of Hell 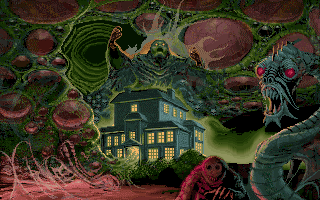 Derceto, the house that cages me and kills me. Either by traps, wildlife or creatures from dimensions beyond ours, I face death at every turn, through every door, in every room. I knew the library held the key, if not literally then perhaps by means literary.

A helpful hint by reader Alex gave me a way to both see in darkened rooms but also to explore and search them. The seemingly obvious idea that hadn’t occurred was to put the lantern on the ground, thus lighting the room. I also took some time to do some serious inventory management, so I could go and grab the book and the statue from the small dark room. 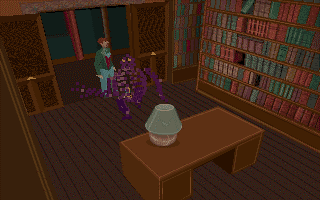 This left the library, which I had so much issue with, firstly from darkness and then from The Vagabond. I still had no way past that creature, but I knew there must be secrets amongst the bookcases. I noticed a polygonal section, but it took me a few attempts to find the mechanism that would open it. Using the False Book that I had picked up from the room at the end of the Art Gallery, I opened this door and revealed a safe space, with pentagram carved in the stone floor. 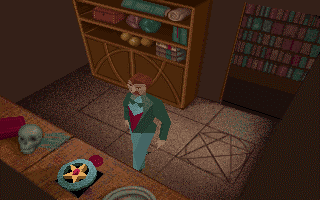 This room was filled with a whole host of items, strange knives, a talisman, and some books and parchments. I had read in previous notes that the symbol on the floor was one of protection, now I just needed to know about the knives and the talisman. Surely some of these books and scrawled letters would provide some illumination.

Of course this being a house that hates, a house that likes to torment and oppose me wherever possible, it turns out that reading the wrong books can provide an untimely death. A few pages is all it takes, so remember kids: if someone tells you to read “The Book of Abdul”, “De Vermis Mysteriis” or similar books, Just Say No! Alas, it was too late for me, but thankfully I am afforded a resurrection by means of restoring an earlier save game. 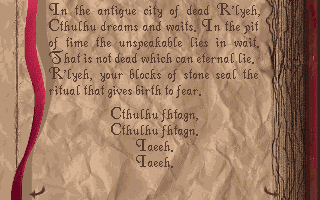 Helpfully, there is a book that tells you which other books are dangerous, although it is of limited use if you find it later after you’ve fully searched the library. I am still unsure I have found all of the books there, but I think I thoroughly searched enough. I’m sure we’ll find out soon enough.

The parchments also contain helpful writings about the use of sacrificial daggers, one of which can be used to dispatch our dear friend the Vagabond (at long last, such an unwelcome guest), a nice serpentine blade, dipped in purified water. There’s also some information about the Talisman, a pentagram in a heavy stone circle, which seems to be related to the land of Mnar (for further reading see “The Doom that Came to Sarnath” by H.P. Lovecraft). What this will protect me against, I am not sure, but I need all the help I can get. 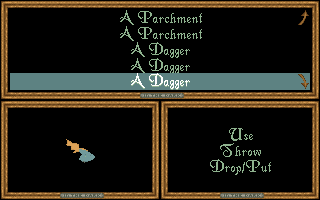 With my newfound knowledge, I am able to strike the Vagabond and finally defeat it. For such a deadly foe a single stab was all it took, almost a letdown really as it faded into smoke. This allowed me to thoroughly search the library, and find a host of books (only a few deadly), including some additional history of this cursed home. With the help of an earlier couple of books, including one found in Jeremy Hartwood’s study, I will attempt to recap the history as concisely as I’m able.

The mansion and plantation was first built in 1818, by a former pirate and I quote “most loathsome human” by the name of Eliah Pickford, using slave labour to reclaim marshland and build foundations atop a series of caves. Why name it “Derceto”? To quote the man himself, “Derceto reminds me of Astarte, the fertility Goddess. Around here the name is Shub-Niggurath, I believe”. 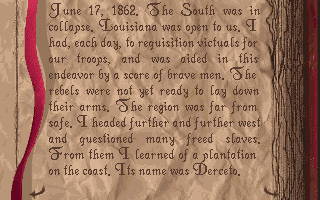 In 1862, the mansion was burned to the ground by Union soldiers, as told by Captain J.W. Norton. They had happened across it as they pushed further into the South, towards the end of the civil war. Initially Pickford had seemed receptive to them, inviting them to stay at his plantation. But as the night drew on, Captain Norton told of an acrid smoke from the cigar he had been given, making his head spin. He saw the demonic face of Pickford leering at him, but was saved by his Lieutenant and his men, who in the confusion, caused fires and gunshots aplenty. Pickford went down with three shots from Norton’s revolver, and the Union soldiers fled. But they saw Pickford’s servants attempt to brave the flames to retrieve their master.

It wasn’t until 1875 that the ruins of the property were sold again, to Howard Hartwood. Hartwood was interested in history, and so interested in piracy and Pickford in particular he sought to uncover whatever treasures may be buried beneath the ruins of Derceto. It is his studious work from which the house was rebuilt exactly as it had been by Pickford, the well-stocked library apparently having been miraculously exempt from the damage of the fire. Howard Hartwood died later, never having found any treasures or hidden pirate gold, with his son Jeremy inheriting the estate. 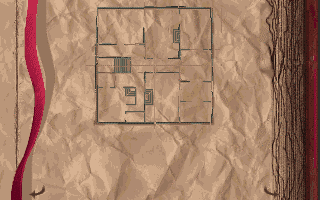 Jeremy of course is the reason we are here, his research into the house finding not treasures, but rather demonic undertakings. Something in this house called to him, entered his dreams and caused him untold suffering. In his diary, started in September of 1924, he writes of a strange draft found in the cellar by his butler, when investigated revealed a hidden passage leading to the caves his father Howard had searched for. If one was being uncharitable, you could suggest he did a rather poor job of searching for such caves, but perhaps it was for the best that he did not delve too deep. Indeed, Jeremy’s research lead him to believe he had unleashed “hellish forces” that preyed upon Derceto, and that sought a body to bring the evil master from the hidden city across into our world. It is now up to me to complete this tale, and once I have finished exploring the ground floor I shall head down into the caves beneath the house and end this evil once and for all!

Tasks for next time: