Missed Classic: Return to Eden - Gonna Live Like a King on Whatever I Find

Last time I had just managed to break through the fence surrounding Enoch, robot built city in the planet of Eden. Unfortunately, the fence wasn’t the only defense, and I was quickly obliterated by a minefield. The solution was luckily near. I had picked up a fruit that looked like a pineapple, but was actually a cherry bomb (hey producers, Piers Anthony used that pun way before you). All I had to do was to use my catapult made out rubber band and y-shaped bone to hurl the bomb to the mine field.

I still couldn’t just walk to the city, since it was surrounded by a huge wall. The animals and plants of Eden tried constantly to attack the wall, but were promptly lasered to death. I had to find another way. 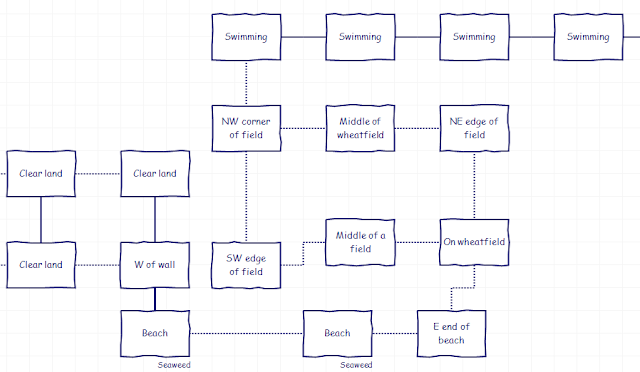 Moving around the wall wasn’t also an option, since I soon encountered a beach, where carnivorous piece of seaweed gulped me, if I walked too far. The solution was pretty obvious. All I had to do was to hitch a ride in autoscythe - a fancy word for an automated rubbish truck. It drove to the other end of the beach and dumped its load - including me - to ocean, where I managed to swim back to the shore.

I still couldn’t get forward. There was a wheat field ahead of me, but when I tried to enter it, a watchtower noted some movement and evaporated me. The solution was quite familiar - now I just had to hop on a feeder and wait till it had drove to a better place where I could continue my journey.

Having crossed the wheat field, I came to a river. When I entered it, the weight of my stuff draw me underwater. Luckily I had found earlier something called suck seed (yeah, it sounds really disturbing), which apparently contained enough air for me to stay alive. With its help, I could follow the river, which finally flowed under the wall circling Enoch.

Under the city wall, I could go either south or east. Taking first the southern route, I met a gang of Hell’s Angels who killed me.

After loading the save game, I went instead east, where I met Graunch, the golem, who was willing to bet 100 credits that I wouldn’t be able to solve his riddle:

I am the genii in the box, I think but I am not. I have no arms or legs and yet, I work until I’m hot. To talk to me you hit my head, and coffee makes me fail. I have no mouth and so I must, eat my food through tail.

I had to check the clue sheet to get the solution, but on retrospect, it’s not that difficult - 5 CAPs for the first person who gets this. Most of the riddles of Graunch were more traditional, but I still had to look up the answers for some of them. In the end, I had 1300 credits in my account.

With nothing else to do, I again tried the southern passage. This time, I didn’t see the Hell’s Angels and so I could walk a bit farther. I ran into something hard.

I saw no alternative, but to give the robot my credit card, which I hoped to get back later. I moved west east into a ventilator system. I found first a flask full of water and then a plug, taking the power to the Big Robot. I pulled the plug and went to retrieve my credit card. Unfortunately, another robot took it and ran away.

Taking the west route from the junction I found roots welcoming me - well they welcomed me, if I was carrying some roots with me, otherwise they strangled me. This seems a bit weird. It has become obvious that the organic life of Eden is waging war against the robots. Wouldn’t carrying dead roots to a room full of live roots be as great an offence as taking a severed ear of a British captain to a House of Commons? In any case, I found some cutters here.

Going finally south from the junction, I found a great hall, which was filled with robot tramps and at the center of which burned a fire. I couldn’t cross the fire to the southern end of the hall, and trying to go around it led to me bumping into the crowd of tramps. The solution was to push some nearby pillars, which led to a collapsing ceiling cutting the cables providing energy to the robots.

With the way clear to the southern end of the hall, I came face to face with Godfather, whose henchman had stolen my credit card. The mafia boss was also a robot, so I decided to throw my flask of water toward him. His bodyguard took the hit for him, but Godfather became so afraid that he let me have my credit card.

After getting my credit card back, I entered yet another air duct. The duct had two exits, which essentially led to the same area - I could use my cutters to open a grating or I could bribe a busker to open a hatch for me.

The ticket inspector above was the most serious thing to find around the new area. At least the metallic man offered an understandable challenge - find a ticket. The rest of the new area was a completely different matter and showed again that the producers of Level 9 have some serious issues with whimsy. I know it’s part of the British national character, but does it have to play so huge a part in every game of the company? Ever since getting in the robot city, the tone of the game had veered toward the not so serious, but now all-around-playfulness just took hold of everything. Well, to be fair, whimsy did fit the theme, since I had just come to an amusement park. 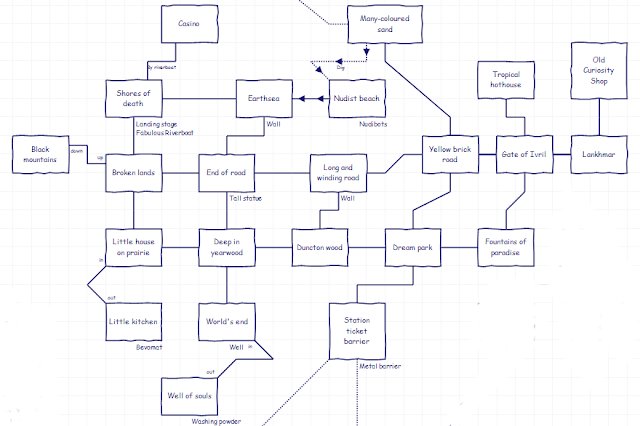 To be more specific, this theme park was dedicated to various fictional places (of course, most of these places were only one room in size):


The most problematic was that all these fictional places were empty. What was I supposed to do? With nothing else to try, I turned to the clue sheet and read this:

Many places in the Theme Park are sponsored by shops. Search or Listen to discover an advert which gives the address.

Really, that was it? Why couldn’t I found out this anywhere in the game? It’s one thing to put vital information just in the manual, because you can’t fit it in the game itself, but it’s utter bollocks to put it only in a clue book! Well, at least I knew what to do now - listen and search in every screen, to find the sponsors:
That was it. I’d found out five addresses (two- or three-digit codes), but that was all the progress I had made. After studying my map, I noticed I had tried only the cardinal directions, which the game usually uses. With some remapping, I discovered new places to visit in the theme park:


Taking the train I immediately noticed an emergency cord. If I happened to pull it, I could stop the train, leave it, and instead of using the train, walk to the next station without getting hit. I was pretty certain this feature was there for a reason, in other words, some station could be reached only by this method.

The first station after the amusement park was a kind of office building with an elevator. The elevator used the codes I had found in the park. There isn’t any sense in making a map of the building, so I’ll just describe the rooms I found: 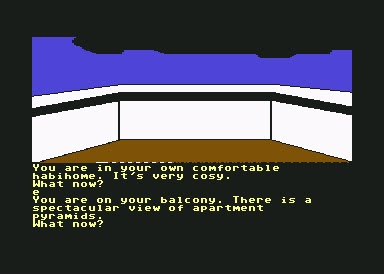 Now that I had searched through the building, I returned to the station and entered a train. It drove pass the next station, but I knew what to do - I pulled the breaks and walked. 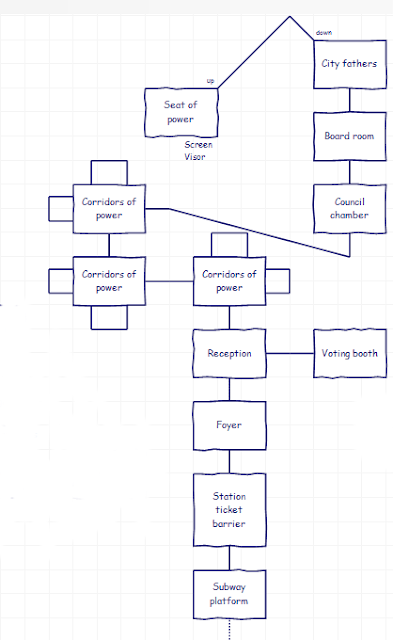 Here I found City Hall, which was off limits for everyone but home-owners - at least there was some purpose in me buying a habihome.

It turned out that I had walked in right at the beginning of the election, and being the only human on the planet, I was both the only voter and the only candidate. It’s no surprise what the result was.

I was now one of the councillors of Enoch and could walk further into the corridors of power in the City Hall. I met the City Fathers, all robots, and since I was the only representative of people - or in this case, representative of a person - I was naturally nominated as the Mayor.

There appears to be no power involved in becoming a Mayor. I did gain an access to a computer system that seemingly bestowed me powers to do quite a lot, but the machine is broken and produces only gibberish. Oh well, the plot is becoming more and more ridiculous and this feels like a good place to stop.
Posted by Ilmari Jauhiainen at 11:00