Rather unsurprisingly, last week’s question (should Psycho be added to the list of 1988 games The Adventure Gamer will play?) has ended up with a positive outcome. The results of the poll are below:

I’d love to know who chose option 1 and whether they’ve actually played the game (anyone want to own up to it?). Regardless, that’s 36 positives to 14 negatives, which is pretty comprehensive. I’ll be playing Psycho! 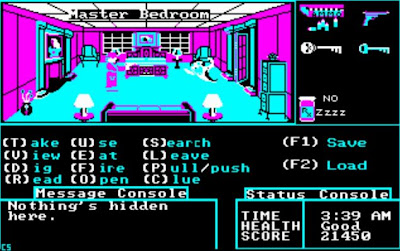 Can anyone tell me which scene in Hitchcock's Psycho had a ghost in it?

This week’s poll is going to be a little more fun and will have no ramifications on the blog. I previously had a poll asking which setting people enjoyed the most in their adventure games, but that particular poll turned out to be fundamentally flawed. This time I’m going to be a little more specific and I wouldn’t be surprised if some of you find it challenging to commit to an answer.

What’s your favourite classic Sierra adventure series? Keep in mind that the question is about the full series', not one particular game in each.

It seems a fitting question, given that I’m playing through Police Quest right now. I know which series I’d personally like to see come out on top (can you guess?), but I’ll be very interested to see what everyone else thinks.
Posted by The Trickster at 21:45