Journal Entry 1: “I have entered the Warlock Lord’s domain! The wizard Lakmir magically transported me to the entrance of the castle, but not before he spoke these words: “Within the walls of the Castle Shadowgate lies your quest. If the prophecies hold true, the dreaded Warlock Lord will us his dark magic to raise the Behemoth, the deadliest of the Titans, from the depths of the earth. You are the seed of prophecy, the last of the line of kings, and only you can stop the Warlock Lord from darkening our world forever. Fare thee well.” On entering the castle I have been faced with many strange things, and the Warlock Lord mocks me, seemingly at every turn. Castle Shadowgate is a dark and deadly place, and I have to take great care not to set off the many traps that cover the path I must take. I have investigated all of the rooms that are immediately accessible to me, and a few that weren’t, but have come up against only dead ends. There is something I’m missing or something I need to do to continue, but so far my efforts have failed. I will focus my attention on the unscaleable wall in the chamber, the pedestal in the pedestal room, the skeleton in the lake, the mirrors in the mirror room, and the dragon in the lair, and hopefully I will find a way to proceed. The world depends upon my success!” 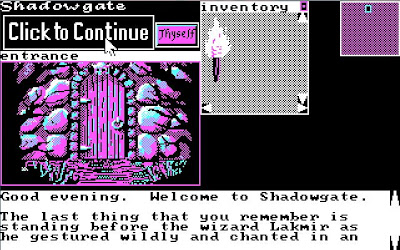 Before I even begin to discuss the challenges I’ve faced in getting anywhere in Shadowgate, I feel it’s my duty to talk about the challenges I faced in simply getting the game to run properly. Someone reading this blog might wish to try their own hand at defeating the Warlock Lord or perhaps in future, someone searching for a way to get the game working might come across this post, so here goes. I’d already learnt, from my experiences playing Déjà Vu and Uninvited, that it’s important to put the game files somewhere on your C drive before trying to play the game through DOSBox.  I did that this time too and mounted a C drive to the path using DOSBox 0.74. The game started up perfectly, but I ran into problems as soon as I tried to save my progress (it just locked up). Knowing that I was definitely going to need to save my game regularly, I hopped onto the DOSBox site to see if there was any compatibility information for the game there. The site suggested that the game is compatible with DOSBox versions 0.58 and 0.62, but nothing later than that. Feeling chuffed that I’d found the solution, I downloaded and installed DOSBox version 0.62. The result was not pretty! 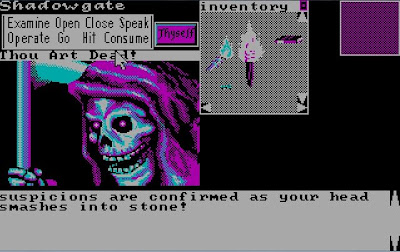 Here's an example of dying in the darkness of DOSBox 0.62

Once again, the game started up fine, and it even allowed me to save, but there were other noticeable issues that were going to be tough to ignore. Firstly, the graphics were extremely dark. Secondly, whenever the game tried to produce sound, no matter how short, I was subjected to between thirty seconds and a minute of gurgling noises. I could possibly ignore the darkness and the sounds, but sitting there waiting for control to return to me while the gurgling noises went on and one was going to be too much. It was then that Sir Charles (his name is just Charles, but I’m going to call him Sir Charles from now on) came to my rescue and introduced me to a little program called DBGL (DOSBox Game Launcher). As the name suggests, DBGL is a front end application that makes it easy to launch games using DOSBox. You can create profiles for each game so you only need to configure them once and play around with all the settings you probably could within DOSBox if you were smart enough (I’m not) using a clear and easy interface. I simply loaded the application, created a profile called Shadowgate (it’s even linked to Moby Games so it picks up all the basic information about the game), and set the Machine field (under the Machine tab) to “cga”. Running this profile from DBGL allows me to play Shadowgate using DOSBox 0.74 perfectly, which means the graphics and sound is fine and I can save my progress successfully. DBGL - DOSBox for the technically challenged

Onto the game itself! Shadowgate is as difficult as I expected it to be. When I read Sir Charles’ comments on the introduction post, I hoped that my previous experience with ICOM games would stop me from getting stuck on the second screen the way he did. It didn’t! After entering the castle, there appears to be absolutely no way out of the first room, with two locked doors the only exits (apart from the front door back outside) and no key to be seen. I spent a good ten minutes pixel hunting and trying all sorts of stupid things before I decided to go back outside and see if I missed something. There’s a small skull just above the entrance, and it turns out you have to click on it and “open” it to retrieve a key that can then be used on one of the locked doors inside. This puzzle sets the standard of difficulty for the rest of the game that follows it, as each screen requires the player to take particular attention to everything and to try some things that are no immediately obvious. Speaking of trying things, there are many options available to the player that end in an abrupt yet painful death. There’s not really any way of predicting these game overs and I guess they should be seen as part of the fun, but I’ve pretty much been saving after everything I do that doesn’t result in instant death. 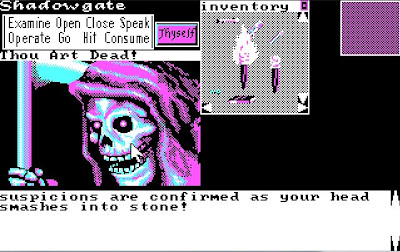 So what have I achieved so far? Well, after getting through the first of the two locked doors I very quickly got my hands on a second key (hidden within a book). This key opened the second locked door in the first room, which gave me access to a little closet containing a sling and a double-edged sword. Dragging these into my inventory, I ventured further off into the castle to explore. Basically, there’s two ways I can go. The first one leads to a chamber with an arrow on the wall. I’ve taken the arrow, but there appears to be no way of scaling the wall to access the door beyond. Any attempt results in part of the wall collapsing, so I assume I need an item to help me get up there. The second pathway leads to a hallway with three doors. The door on the left leads to a pedestal room, which is aptly named as it contains a large pedestal in the centre of it. I’ve tried doing various things with the pedestal without success. The room beyond the pedestal room holds a number of treasures and weapons, but any attempt to do anything with any of them results in a dragon disintegrating me with its fiery breath. I’ve tried throwing rocks at the dragon and “operating” my sword on it, but to no avail. Thankfully, I’ve had more success through the second door! 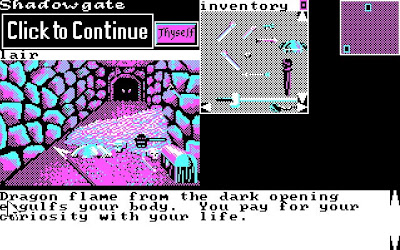 What was happening here? Hmmm...oh yeah, I was dying again!

The second door leads to a room containing six tombs. If I label the tombs one to six, this is what happened when I opened them: One – a banshee comes out screaming. This is there to scare the shit out of the player but has no other relevance from what I can see. Two – slime pours out of the tomb and any efforts to do anything with it or even get past it result in my death. Four – appears to be empty. Five – contains a leather pouch filled with gold coins. Six – contains a mummy. “Operating” the mummy achieved nothing as did speaking to it, so I did what any adventurer would do. I set it on fire. This actually worked, as burning the mummy revealed a King’s Sceptre which I eagerly added to my inventory. What about tomb three I hear you ask?! Well, this tomb leads to a mirror room. There’s a broom in there that I picked up, but I can’t yet see anything that I’m supposed to do with the mirrors. The centre one is surrounded by jewels whereas the other two are framed by oak, so I’m thinking the centre one holds some importance, but any attempts to do anything with them result in the game telling me the mirror seems to be protected by some sort of magic. 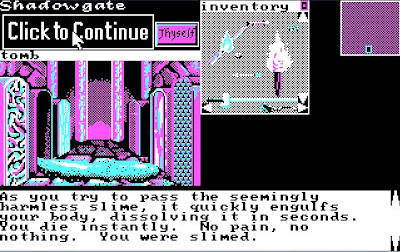 This is one of my favourite bits! Oh...not it's not, this is where I died again.

With nothing else to try in there (that I can think of), there was only one more doorway to go through. The third door leads to a lake that strangely has sharks in it. What’s even stranger is that there’s a skeleton figure standing in the lake holding a key. With no way to cross the lake without being eaten by a shark, I started slinging rocks at it, but that didn’t achieve anything. Just next to the lake is a pathway that leads to a waterfall, and it’s here that I collected all the rocks that I’ve been throwing with the sling. So…I currently am not sure what to try next. As I mentioned in the journal, the mirrors, the lake, the pedestal, the dragon lair and chamber wall are all of interest, and while I can’t currently think of what to try with any of them, I’m determined to have another shot at trying to progress unassisted. If you’re wondering whether Shadowgate is aggravating me as much as Uninvited, well the problems with that game still remain. The inventory is tedious, the CGA graphics make pixel hunting very difficult, but most of all the time limited is downright annoying. In Shadowgate, the time limit is implemented by making the player always have one lit torch. You keep collecting torches as you go, but if they all run out, you’re left in darkness and unable to continue. Despite this, I’m currently enjoying the challenge offered by Shadowgate and it at least offers small rewards whereas Uninvited offered very few. Only time will tell whether this enjoyment turns to frustration and rage. 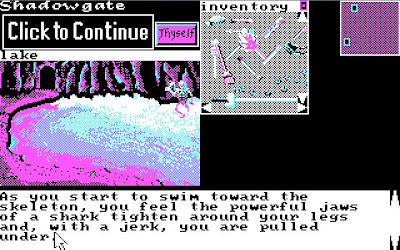 Question: How do you know you're playing an ICOM game?
Answer: You get eaten by a castle shark trying to reach a skeleton standing on a lake holding a key.

I stole this time idea from Zenic (with his blessing of course).
Posted by The Trickster at 21:54

Email ThisBlogThis!Share to TwitterShare to FacebookShare to Pinterest
Labels: 1987, Shadowgate