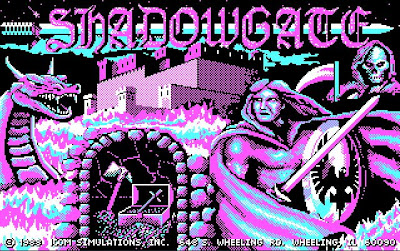 You would have thought that CGA might have gone away by 1988, four years after King's Quest

If there’s one thing that this blog has taught me, it’s that sheer determination and perseverance almost always leads to rewards. Apart from the games I’d already played through previously, I think there’s only been one game (Leisure Suit Larry) where I didn’t run into a significant brick wall at some point and even that game had me scratching my head a few times. Getting through Mortville Manor was a huge challenge for numerous reasons, not least of all the terrible translation and the illogicality of the plot. Both King’s Quest III and Maniac Mansion had their fair share of nasty puzzles that caused me no end of torment, but I persisted and was in every case rewarded to great satisfaction. However, there’s one game that sends shivers down my spine, and not for the reason it was likely designed. Uninvited! Just thinking about it makes me want to cower in the corner and tremble uncontrollably. No other game has given me so little in return for intense logical application or even determined trial and error. I wanted to enjoy the game…but I hated it! 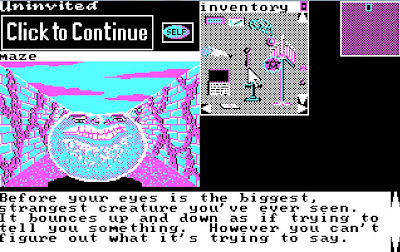 If Shadowgate has a strange round grinning creature that just wants to fly, I'm quitting immediately

What’s any of the above got to do with the fourteenth game on my list? Well, ICOM released four games in total in their MacVenture series. Déjà Vu was the first (which was still challenging but nowhere near as frustrating), the second was Uninvited, and the third…yeah you guessed it…is Shadowgate. Call me a coward if you will, but I’m genuinely scared about starting this game, fearing that my next two weeks might be filled with tear-your-hair-out frustration and nights of aimlessly wandering around ugly CGA environments. It really doesn’t help that the little I’ve read about the game suggests the player dies at nearly every turn and Computer Gaming World’s review claimed the game was a step up in difficulty from Déjà vu and Uninvited. But…I’ve decided to man up, let go of all preconceptions, and go into Shadowgate expecting to win! It’s by far the most popular of the ICOM games, so it can’t be completely rubbish, and a few of you out there (Zenic for one) have commented that you enjoyed this game much more than Uninvited. 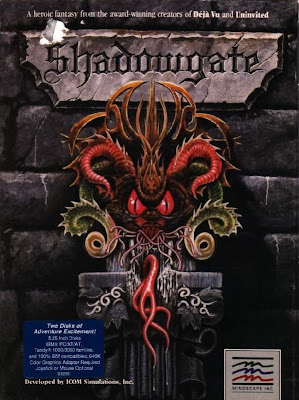 This cover suggests more horror than fantasy, but it's what's on the inside that counts right?

So what’s it all about? Shadowgate was originally released for Apple back in 1987 before being ported to numerous other formats including DOS in 1988. It uses the same interface as was used in the previous two MacVenture games and, unfortunately, was ported to DOS in glorious palette 1 CGA. While Déjà Vu was a detective game set in 1941 Chicago and Uninvited had a haunted house scenario, Shadowgate appears to have a fantasy setting (albeit a dark one) where the player takes the role of the “last of a great line of hero-kings”, with the aim of saving the world from an evil Warlock Lord who is attempting to summon a demon Behemoth from the fiery pits of Hell. The box artwork is fairly Lovecraft-ish so I imagine this might be a rather dirty affair, but I’ve learnt to never judge a book by its cover so we’ll see. Speaking of books, I notice Nintendo went through a phase of releasing game related books around 1991, and Shadowgate was one of the games chosen for the treatment. The book is a prequel called Before Shadowgate and I have no idea whether or not it should be recommended, so read at your risk! Anyway, I’ve downloaded the game and a manual (which is for the Apple, but I can’t imagine it differs all that much) and am ready to enter Castle Shadowgate. If I don’t hear from me within a couple of days, well...just know that I died an honourable death. 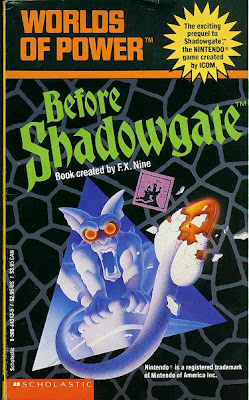 All I know is that Uninvited came Before Shadowgate, so I'm not rushing to the bookstore
Posted by The Trickster at 21:58