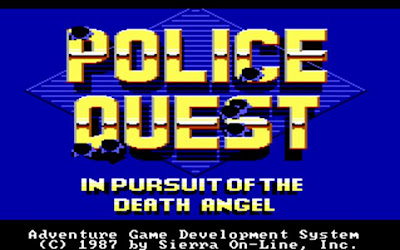 I know what you're thinking! "Did he fire six shots or only"...hey, hang on a second!

By 1987, Sierra had already covered a wide range of genres with their AGI adventure game engine. The King’s Quest series had fantasy sorted, Space Quest had science fiction covered, and Leisure Suit Larry took care of…um…let’s call it adult comedy. The company was smart enough to realise that they should continue to expand their themes, therefore attracting a new audience without competing with their own product. Ken Williams, the co-owner of Sierra, had a few ideas as to where they might venture next, but it was a chance meeting with retired police officer Jim Walls that would lead to the next series launch. Walls had spent fifteen years in the California Highway Patrol unit, and had been forced to retire after a shooting incident left him traumatized.  Williams had already considered a series based on the experience of police officers, and when he mentioned to Walls that all he really needed was a real officer’s involvement in the game’s development to maintain realism, Walls volunteered his services and a partnership was formed. Walls then went about writing a story that included real life police officer protocol and situations, and would go on to assist in the development of numerous other games both in and out of the Police Quest series. 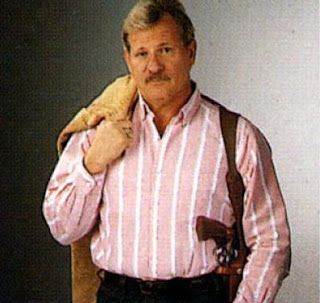 To get the job done, Williams recruited the usual suspects to develop the game. Al Lowe (Leisure Suit Larry) and Scott Murphy (Space Quest) would program it, Mark Crowe (Space Quest & Leisure Suit Larry) would handle graphics, and Al’s wife Margaret Lowe (King’s Quest III) would write the music. They were all pretty used to the technology by then, and were able to crank out a game in a matter of months. In this case, the result was released as Police Quest: In Pursuit of the Death Angel for the PC, Apple II, Amiga, Atari ST and Apple IIGS in the backend of 1987. The game is based in a fictional town called Lytton, California, and the player takes on the role of Sonny Bonds, a driving patrol officer. It’s most well known for including many puzzles that require proper police procedure to succeed. In fact, it was reported to have been used as a training tool for police officers. There’s a quote out on the net that says “Police Quest has proven to be a practical, effective training tool officers enjoy using. It safely demonstrates to rookies the consequences of failing to observe police procedures and can serve as a valuable refresher course for experienced officers.” This sounds an awful lot like a marketing ploy to me, but I haven’t played much of it yet, so who am I to judge. 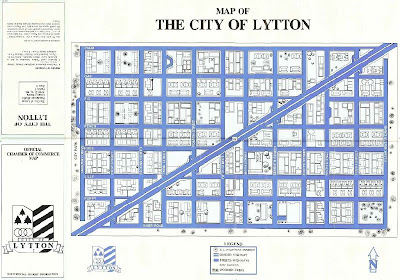 The City of Lytton

As usual, I’ll be playing through the original version of the game and not the 1992 VGA remake. Having purchased the Police Quest Collection of GOG not too long back, I was very disappointed to find that it only includes the remake and not the original. This is one of the only times GOG has dropped the ball in my opinion and I hope they rectify it at some point. The other Quest series collections they have include the originals, so I’m not sure what happened this time around. In the meantime, I’ve been able to download a copy of the 1987 version and the documentation that came with the GOG collection seems to be the same that came with the original (please tell me if anyone thinks there’s a difference). Speaking of documentation, there is a heck of a lot of it (a manual, map, reference guide and newspaper), and it contains a lot of police jargon and procedures. It’s actually a bit daunting, so I hope it’s not a matter of learning it all and merely requires referring to once every now and then. I do recall playing Police Quest as a kid, but I’m pretty sure I wasn’t able to get very far without the manual, which isn’t at all surprising now that I‘ve got my hands on it. I’m far better equipped to get through it now, and am very much looking forward to getting stuck into it. My gun is locked and loaded and I’m ready to hit the road, once I check my car first of course. 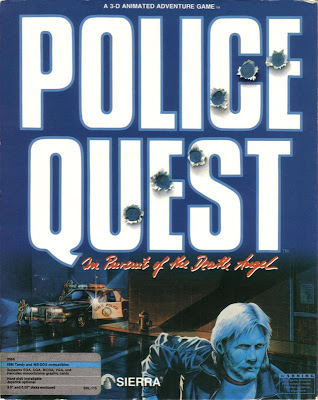 Thank you to Manny for letting me know that the original cover I used was the remake. 10 points!
Posted by The Trickster at 20:52

Email ThisBlogThis!Share to TwitterShare to FacebookShare to Pinterest
Labels: 1987, Introduction, Police Quest: In Pursuit of the Death Angel