Sonny Bonds Journal Entry 2: “As if my day hadn’t already had enough excitement, I’ve now had to deal with overly aggressive bikies, an insanely drunk driver, a depressed pal, and last but certainly not least, a revolver packing criminal on the run! It seems that everywhere I go in this godforsaken town, there’s something I need to deal with. Lucky I’m trained for this stuff! Those bikies knew they never had a chance once I got my nightstick out and they left the bar without any further trouble. As for the drunk driver and “Marvin Hoffman”, the narcotics freak that tried to ruin my day, they’re both spending some time behind bars after taking a ride in my patrol car. Speaking of patrol cars, I don’t think I’ll be spending much time in them from now on, as I’ve received a promotion to the narcotics department! I’ll be working with Laura Watts and will be driving around in unmarked cars in casual attire, at least for the foreseeable future. My first case is try to get something on Mr Hoffman that will convince Judge Palmer not let this obvious criminal out on bail. I think I’ve got enough to nail him too, as I’ve found an FBI warrant for Jason Taselli, who often goes under the alias of...yeah you guessed it...Marvin Hoffman. I just need to figure out how to use this damn printer!” 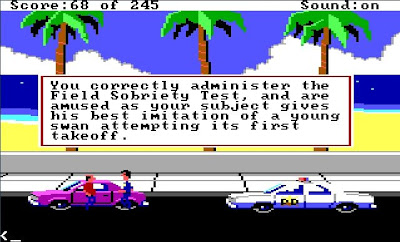 My last couple of Police Quest sessions have continued in a similar fashion to the first one, with slightly more emphasis on logical deduction rather than merely following procedure. The game is extremely linear, with one success leading to another assignment pretty much immediately, and there’s never any doubt about what you are required to achieve next. Apart from the minutes of cruising around town in the patrol car, waiting to witness a felony or for a call to come through on the radio, there’s a general sense of urgency that pushes the game ever forward. There’s always somewhere that Sonny needs to be, whether it be the station, a bar, the courthouse, the jail etc., and often he needs to be there within the next fifteen minutes, so there’s just no time (or need) to muck around and search every screen the way you would in most adventure games. I still haven’t decided how much I like the game, and I might not be able to make a real judgement until I find out how it all wraps up at the end. It’s certainly quite different to every other game on the list so far and makes for a refreshing change, but whether or not being coaxed through a day in the life of a police officer is satisfying enough once all is said and done, could very come down to personal preference. 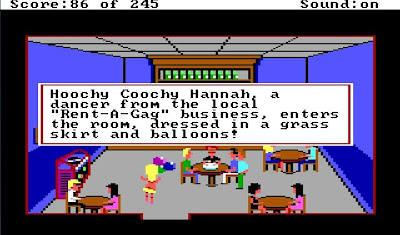 Al Lowe just had to get a half naked woman into Police Quest somehow!

While the game is still holding my hand a fair bit and requires following manual procedures more than it does brain power, there have been a couple of places where it surprisingly hasn’t, resulting in my progress being delayed. It’s these times that you realise the developers of the game really had their hands tied. Considering how little knowledge the average person has about the goings on in the day of a policeman, they had no choice but to give as much instruction as was required. After all, real cops don’t learn on the job do they!? The game (and the manual) made it pretty obvious that to make the bikies leave the bar, you need to use physical force, ideally with a nightstick. What neither the game nor the manual told me is where that nightstick is located. I’d collected everything I needed from my locker and around the station in general, but I’d never come across a nightstick. I eventually just tried typing “get nightstick” while I was sitting in the patrol car and was pretty surprised (not to mention ecstatic) when the game responded with “ok”. Did I just miss something or is there no lead to let you know that the nightstick is in the car? Maybe it’s just common knowledge that cops leave nightsticks in the patrol car when not on duty and my lack of cop knowledge is to blame? Or maybe, I should be grateful that the game for once didn’t hand the solution to me on a platter instead of complaining! Either way, once I had it, merely taking it out in the bar was enough to make the bikies run away with their tails between their legs. 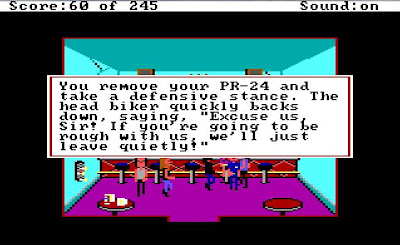 Run home and cry to mama!

Pulling over the hilariously drunk dude and administering the alcohol test was a more straight forward affair, literally following the manual instructions step by step before driving him to jail. I’ll admit that I suffered a game over here for not putting my gun in the locker at the front of the jail, resulting in my prisoner grabbing it and shooting me as soon as I took his cuffs off, but that’s a mistake I’ll only make once (and I assume many have made before me). Capturing Marvin Hoffman was a surprisingly tense and cinematic experience, with a real sense of imminent danger given to the scene. It was still just a matter of following instructions though: exit car, draw weapon, command suspect to exit vehicle, command suspect to stop, put their hands in the air and lie face down, cuff suspect, search suspect, read suspect rights, put them in the car and drive them directly to jail. Failure to do any of these steps in that exact order results in your death, but the manual very clearly tells you what to do and in what order. I got stuck at the jail for a while once the guard asked me what Mr Hoffman was being booked for. The game didn’t seem to like any of my answers (murder, evading police, speeding, homicide, unlawful possession of a firearm). I eventually started trying different codes that were listed in the manual for each of the above crimes, but they wouldn’t work either. Finally I tried narcotics, which a radio transmission had suggested the suspect had a prior arrest for, and it worked. Given all the other things this guy has done wrong, I felt that was a little bit pedantic. 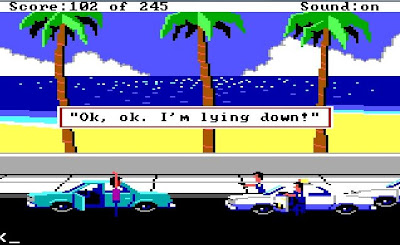 By this point in the game, it appeared that my progress was only going to be halted by "find the right  command" problems, and that keeping the manual at my side at all times would likely be enough to get me through. However, Police Quest had a surprise for me. I’m presently pretty damn stuck! My first case in the narcotics department is to find any evidence that might stop the judge from releasing Marvin Hoffman on bail. Basically this evidence needs to be found within the station itself, and it took me all of about one minute to find what I considered to be enough to keep the guy under lock and key. I checked out a file in the narcotics cabinet that showed me all the details on Marvin Hoffman, including photos. I then found an FBI Most-Wanted List on a clipboard in the office that had the same dude going under the name of Jason Taselli, who sometimes goes under the alias Hoffman. Heading into the computer room, I searched the database for Jason Taselli and found a federal warrant for the guy, which included his alias Marvin Hoffman. So what’s the problem I hear you ask? Case closed, get to the courtroom! Well, I tried that, but unless I can give them actual evidence of the warrant, I get thrown out in contempt of court. The most obvious solution would be to print the warrant, and the computer does appear to have a printer, but I can’t see any way to make that happen. Any command while using the terminal is treated as search criteria and any commands about printing while not using the terminal result in a negative. I’m still not certain whether this is yet another find the right command problem or something else entirely. Well...I was criticising the game for being too easy. It’s time to face the challenge! 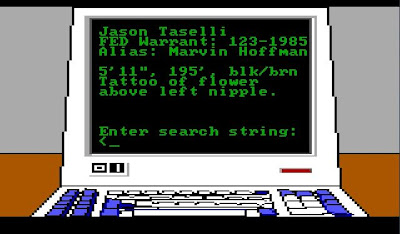 A shame they didn't have iPhones back in the eighties
Posted by The Trickster at 22:38

Email ThisBlogThis!Share to TwitterShare to FacebookShare to Pinterest
Labels: 1987, Police Quest: In Pursuit of the Death Angel