The two weeks are up and the “What games should The Adventure Gamer play?” poll is closed. I have to admit that I was pretty surprised at the results, and the options I thought people might go for didn’t even get a look-in. For example, I was pretty sure beforehand that Option 2 would be the one that people would go for, given that it gave the readers some control over what games go on the list without having to create a whole new one. It eventually ran in a distant third!

I was getting a bit concerned at the halfway mark when “The lazy bastard should play every adventure game ever made!” was streaking away to a healthy lead. At the time I was trying to come up with positives such as “well they must like what I’m doing if they want me blog about every game”, but in reality there was no way I would ever be able to go through with it. There are simply too many games and many of them are not available to purchase or download, so I was happy when it started to drop off. Noticeably it dropped away and “Whatever games he wants to” overtook it, right after the announced hiatus of The CRPG Addict blog. I can only assume that people started thinking about the realities of what I’m doing, and that making the project unachievable will always lead to an early failure. I obviously plan to see this through to completion, but making it impossible will just lead to frustration and loss of enjoyment.

Friday, January 20, 2012: The day you all started caring about my sanity
Anyway, the most telling fact that I took from the poll is that only 4% of people think the Wikipedia list is good enough, so I’ve decided to follow it less strictly. This is how I intend to approach things from now on:

At the beginning of every year (not the current year, the year the games were made), I will write a post that includes the games on the Wikipedia list for that year. I will comment about which ones I intend to play and why, and I’ll also add any others that I feel have been left off. You guys can then tell me your thoughts regarding my selections and make some suggestions of your own, but at the end of the day, I’m going to play the games I want to (that’s what the readers voted for after all). With the completion of Uninvited, I’ve finished all the games on the list from 1986, so it’s time to look at 1987.

On the Wikipedia List
Leisure Suit Larry in the Land of the Lounge Lizards
Maniac Mansion
Mortville Manor
Police Quest: In the Pursuit of the Death Angel
Shadowgate
Space Quest II: Vohaul’s Revenge

The Sierra and LucasArts entries are obvious, so there’s no point discussing them. As much as I fear it after playing through Uninvited, I'm determined to play through Shadowgate as well, so that leaves only Mortville Manor as questionable. I’ve personally never heard of it before and it has no votes at all on Moby Games (compared with over a hundred for Maniac Mansion), but from what I’ve read about it, it seems to have some features that are new to the adventure genre. I’ve also found a working DOSBox version, so I see no reason not to play it. 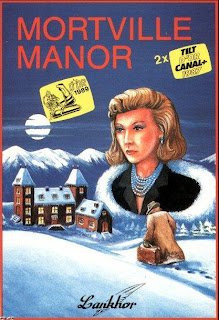 From what I've read, Mortville Manor actually does seem to belong on the Notable Graphic Adventure Game list.
Not on the Wikipedia List
I can’t find any other 1987 graphic adventure games that I feel need to be played. The only other popular one is Roberta Williams' Mixed-Up Mother Goose, but that was aimed at toddlers and would surely be of little interest to Adventure Gamer readers (tell me if that’s one you were really looking forward to). Anyone got anything else they’d like to bring to the table, or do those six games look the goods? 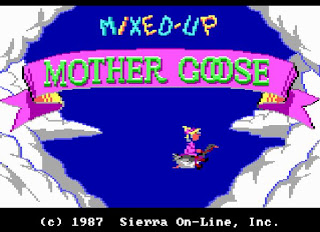 Is anyone out there eagerly waiting for me to find the mixed up rhyme pieces and return them to their owners?
Posted by The Trickster at 14:29