I’m having a busy few days right now so I haven’t had any time to start the next game. I’ll definitely have an update of some sort in the next few days though.

In the meantime, I’ve had a good think about the situation involving which version of Maniac Mansion I played through, and how that might have affected my rating of the game. For anyone unaware of the discussion, I played through the enhanced edition of the game which was released a short while after the original (around a year later). The enhanced edition has much better graphics than the original, but is otherwise exactly the same. A few people have commented that playing the enhanced edition would have skewed my rating, particularly the score I attributed to the Sound and Graphics category. 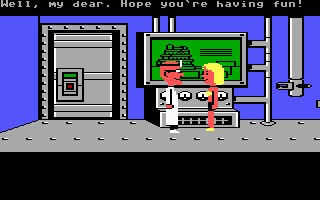 ﻿Before I reveal my decision, it’s worth noting that the Enhanced Edition is not a remake of Maniac Mansion. It is an enhanced version of the original game. This is different to the Sierra remakes that were developed in the early nineties, where all aspects of the game were improved upon and in some cases the actual game mechanics were changed considerably. Not the case here!

I’ve decided to adjust my final rating for Maniac Mansion. My reason for this is not so much because I didn’t play the original release (in other words, I’m not opposed to playing patched or updated versions of a game), but because I did unfairly compare the graphics of the game to other games released in and prior to 1987, when the enhanced edition was released in either 1988 or 1989 (the jury is out on that). I’ve spent a bit of time checking out the original release and I don’t believe that the puzzles, interface, or any other category apart from Sound and Graphics would have been unfairly skewed by the version I played. It’s fair to say that Environment and Atmosphere may have been skewed by the increased graphical quality, but since I happened to be fairly critical in that department when rating the game, I don’t think that’s the case for Maniac Mansion. 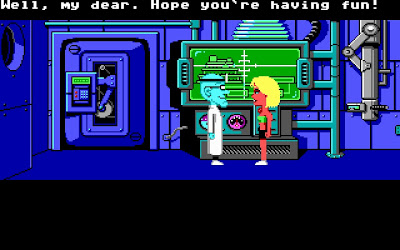 ﻿So, I’m going to change the 7 I gave for Sound and Graphics to a 5. The graphics are merely on par with the likes of Leisure Suit Larry and Space Quest which I gave 6, but there is a distinct lack of sound in Maniac Mansion which I’d criticised previously. This changes the overall rating of Maniac Mansion from a 65 to a 62, which still rightfully leaves it at the top of the board. The good thing is that there are very few future cases of games with multiple versions, but whenever I come across them, I will make sure I play the earlier version wherever possible.
Posted by The Trickster at 14:30