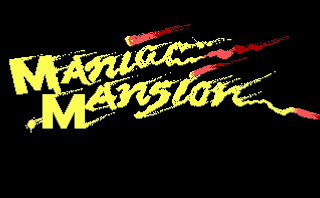 These game developers really love their alliteration don't they

Game 11 is one that I really should have played before, but for some strange reason never did. I’ve come across the name Maniac Mansion many, many times when reading about classic adventure games, and have even played through the 1993 sequel Day of the Tentacle, so I’m really looking forward to checking out what was the first LucasArts adventure game to hit the PC (1986’s text parser driven Labyrinth was never released on PC). There’s actually a heck of a lot of info out there on the internetz regarding the origin, development of, and critical response to the game, so I’ll try to keep this pre-game introduction post to a short summary of events rather than a step by step trip back in time (trust me, it’s my tendency to go way overboard with the research). If you want more detail, then Wikipedia is your friend. 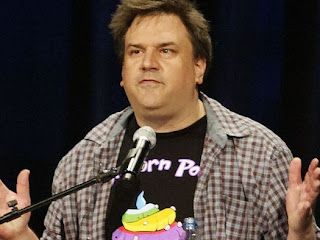 Maniac Mansion is the brainchild of Lucasfilm Games employees Ron Gilbert and Gary Winnick. The two of them met while working on separate games for the company (Gilbert on Koronis Rift, Winnick on Labyrinth) and immediately bonded due to their similar tastes in humour and movies. When they were asked to design an original game together, the duo began trying to come up with ideas based on their love of B grade horror films, and quickly decided a comedy-horror set in a haunted house would suit their interests and talents. Shortly after they began writing, Lucasfilm Games relocated to Stable House at Skywalker Ranch, and it was the Main House of the ranch that inspired the concept art and eventual look of the mansion. Gilbert had recently played Sierra’s King’s Quest, and thought the adventure game genre would be an ideal format for their ideas, but there were certain aspects about that game that frustrated him. In particular, he found the text parser the player is forced to use to interact with the world to be an inadequate and at times infuriating method. He figured the game should be controlled solely by mouse and set about creating an entirely point and click interface. 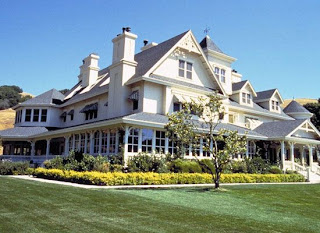 ﻿Another significant change that they planned to implement was multiple playable characters. They felt that letting the player choose which characters they played with would result in multiple pathways through the game and a level of replayability that adventure games had previously not had. The player would choose two characters from a list of six to accompany the game’s protagonist Dave into the mansion. Each character would have unique skills and each were based on stereotypes and people they knew. For example, the main protagonist Dave was based on Gilbert, punk rocker Razor was based on Winnick’s girlfriend Ray, and writer Wendy was based on a fellow employee that went by the same name. Unfortunately, the pair underestimated how difficult it would be to give the player so many different ways of solving puzzles, and subsequently spent months working on the event combinations that could occur.  Avoiding dead ends was extremely difficult and the game’s development time was already well beyond any previous Lucasfilm game when the real programming got underway. 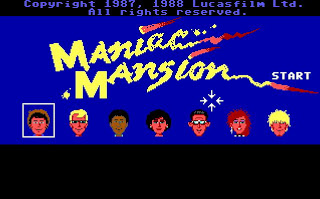 Speaking of programming, Gilbert employed the assistance of fellow employee Chip Morningstar to help him build the new engine required to run his game, and David Fox to help with scripting.  He originally planned to have up to forty verbs on screen that the player could use to interact with game world items and characters, but the list was eventually dropped down to twelve that they thought were essential. These were integrated into the engine which took close to a year to complete, and was later named Script Creation Utility for Maniac Mansion (SCUMM). After close to two years of development, Maniac Mansion debuted at the 1987 Consumer Electronics Show in Chicago. While it was initially released only for Commodore 64, the SCUMM engine enabled easy porting to other platforms, so ports soon arrived for the Apple II, DOS, NES, Amiga and Atari ST. It quickly garnered rave reviews from critics and has gone on to be considered a seminal adventure title, simultaneously announcing Lucasfilm as a serious competitor to the already well-established Sierra. The SCUMM engine would become the backbone of the company for years to come, with classics such as The Secret of Monkey Island, Indiana Jones and the Fate of Atlantis, Sam and Max and of course Day of the Tentacle all making use of Gilbert’s creation. 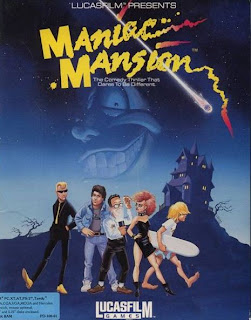 The box artwork was created by Winnick's mate Ken Macklin

﻿That completes the Overview of the Origin and Development of Maniac Mansion 101 course. I hope you enjoyed it, or at least learnt something interesting. Now it’s time for me to enter the mansion and experience the game for myself! I’ve been a little confused about which version of the game to play, as there seems to be a few around. It does not appear that the game is available to buy these days, but please let me know if I'm wrong. In the end, I think I’ve got the best version of the original game, being the enhanced DOS version 2…um…version. This will be my first experience of using the SCUMMVM emulator, and after quickly starting the game up, it seems to be very easy to use. I’ve also paid a visit to Replacement Docs and found a PDF copy of the manual. The backstory of the game is not entirely clear from the manual, but it seems the protagonist’s girlfriend Sandy is being held captive in the mansion, and it’s up to Dave and two other college students to go in and rescue her. The last time I entered a haunted mansion to save someone resulted in a week of Uninvited pain and frustration. I get the feeling this experience is going to be quite a different one. Hold on Sandy…I’m coming to get you! 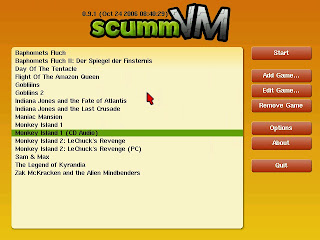 The SCUMMVM Emulator: Looks clean and easy to use.
Posted by The Trickster at 12:14