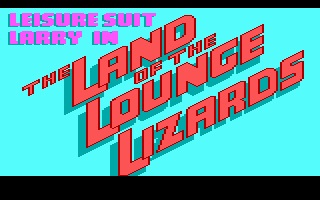 Because alliteration is funny

﻿The tenth game that I’ll be undertaking is one that the majority (if not all) of readers would have heard of. However, before I talk about that game, it’s worth taking a trip back to 1981, back to a little game called Softporn Adventure. By this stage, Sierra had already made a name for themselves through graphic accompanied interactive fiction games such as Mystery House and The Wizard and the Princess. Someone at the company decided it might be profitable to develop an adult themed game, but a decision was made early on that it would be text based only, most likely to avoid censorship. A man named Charles Benton took on the task and the result is a pretty crappy game that follows a down on his luck party animal that’s trying to get laid. Regardless of how bad it is, Softporn Adventure sold over 25000 copies, which is pretty amazing considering only 100000 Apple II’s had been sold at the time of release. These days the game is most famous for its steamy cover that includes three naked women (the company bookkeeper, a Sierra employee’s wife, and founder Roberta Williams!) in a spa bath.

﻿Once Sierra’s King’s Quest series had successfully transitioned the adventure game genre from interactive fiction to animated graphics, Ken Williams decided it was time to remake Softporn Adventure using the AGI engine. Al Lowe (Black Cauldron, King’s Quest II) and Mark Crowe (Black Cauldron, Space Quest) were brought in to make the game, but after Al played through the original game in preparation, he realised how out of date the game really was. When he got back to the office, he told Ken Williams that “it’s so behind the times it might as well be wearing a leisure suit”, a joke which kicked off a new approach for the remake. It was decided that the basis of Softporn Adventure would be kept intact (the locations, plot, structure and puzzles are relatively unchanged), but that the game would feature an onscreen protagonist and much more humour.

Much time was spent on the creation of said protagonist, with the end result being a 40 year old slightly fat, balding, out of style loser named Larry Laffer. His name was originally going to be Jerry, after one of Al’s friends who regularly visited the office and thought of himself as a fantastic lover, but was changed to Larry so as not to offend the real Jerry. Al then skimmed an encyclopaedia trying to find a suitable surname that began with L, and knew he had the right one as soon as he saw the name Arthur Laffer (an American economist). With that sorted, the duo began work on what would eventually be known as Leisure Suit Larry in the Land of the Lounge Lizards. The main challenge that they faced during the development was that Mark was only available for four weeks due to his commitments to Space Quest, and therefore had to work nights and weekends to get the game finished. It took a total of three months to complete, but was delayed until June 1987 while it was beta tested (a first for a Sierra game). 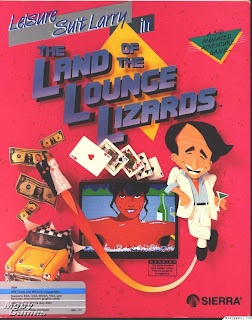 This is actually a really cool cover, despite being pink!

﻿The company was clearly uncertain about how Leisure Suit Larry would be received, and decided to release it with no publicity or advertising. This resulted in the worst first month sales for any Sierra game ever, and Al figured he’d just wasted six months of his life on a complete failure. But word of mouth spread quickly and the game’s sales doubled every month, despite some stores refusing to sell it due to its questionable content. It eventually sold in advance of 250000 copies and is also widely known as one of the most pirated games in history. Sierra claims that they sold more hint books than they did actual games, but who knows how true that is. Anyway, that’s enough history, it’s time to help Larry get laid! As always, I’ll be playing the original 1987 version, in all its 16 colour glory, and not the 256 colour 1991 remake. I’ve downloaded a version for DOSBox along with a PDF manual, and am raring to go. 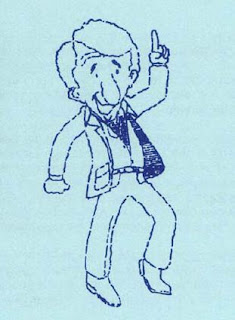 How can I possibly not get laid!?
Posted by The Trickster at 06:00