Game 10: Leisure Suit Larry I - Skanks for Nothing

Larry Laffer Journal Entry 1: “Oh yeah, I am totally going to get laid! Not only that, but this chick is seriously hot! It seems my decision to finally reveal to the world my wares is paying dividends, and now the ladies just can’t get enough of me. This rocking evening started at Lefty’s Bar, where I sank a few drinks before making my way into the..ahem…establishment next door. I distracted the pimp with some nasty porn which gave me the opportunity to shed my virginity with the local hooker. Unfortunately she was a bit skanky and I didn’t want to waste my performance when other more gorgeous women are out there waiting for me. It’s a good thing too as I seduced a blonde bombshell named Fawn at the disco about thirty minutes later. I knew she had to be mine as soon as I saw the eight other guys obsessing over her, and she was clearly unprepared for my natural charm, good looks and…well…presents. It only took a rose, a box of candy and a diamond ring and she was all over me on the dance floor! She told me she wants to make wild, passionate love to me, but only once we get married. Needless to say, we were at the chapel about two minutes later and now the beautiful Fawn is my wife! Now it’s time to...um…consummate the marriage, if only I could find some champagne…

After the painful experience that was Uninvited, the more stress-free and hysterical Leisure Suit Larry in the Land of the Lounge Lizards is a fantastic change of scene. I’ve played for two and a half hours so far and have racked up 78 points out of a possible 222 without too much trouble. Before I continue, I should point out that I have played the game previously, but I must have been about 12 at the time, and didn’t get very far due to the adult nature of the puzzles. I remember very little at all, which is why I haven’t been able to rip through any of it this time around. The first thing to discuss is the age verification system that comes up every time you start the game. Al Lowe figured he would ask five randomised questions that he presumed only adults would know the answers to, in an attempt to stop children from playing what is a very adult themed game. Unfortunately, this little quiz didn’t just make it difficult for kids to run Larry all over town trying to have sex with every woman he can find, it also acted as a form of racial selection. While I did manage to pass the test on my first attempt (you can get one question wrong out of six), it wasn’t without a couple of educated guesses (I’m Australian after all). A lot of the answers would only be known by Americans, and these days you’d also need to be at least well into your thirties to be able to breeze through it. Thankfully Google makes the whole thing obsolete today and you can skip it by pressing Ctrl + X. 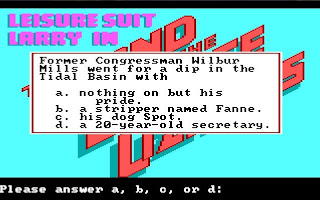 So let me get this straight. If I don't know the answer to this, then I'm not an adult!

With that out of the way, I began my quest to relieve the suffering Larry of his virgin condition. Right from the start, the jokes come thick and fast, and just about every item you look at results in a humorous quip, often at Larry’s expense. I can only imagine how much of the game’s humour would have gone straight over my head as a kid, as it’s mostly of a sexual nature. Given how upfront this aspect of the game is, it’s not surprising that Leisure Suit Larry caused so much controversy when it was released. In fact, I very nearly didn’t solve one of the first puzzles in the game, just because I didn’t consider that the game could possibly be that scandalous. There’s a totally smashed dude lying in the hallway of Lefty’s Bar. If you try to talk to him, he slurs out some pickup line, but is totally incapable of getting up. If you try to “help the man”, the game tells you that he is beyond help, but very thirsty. My immediate reaction was try to get some water for the poor sod, but I had no form of container to get any from the bathroom, and Lefty certainly wasn't going to serve me any. Eventually I sat down at the bar and ordered some drinks for myself, only to find that Larry put a shot of whiskey in the inventory rather than drinking it. Still not really thinking that the game could possibly reward the player for offering alcohol to a raging drunk, I typed in “give whiskey to man”. Yep, he knocked it back and gave me a TV remote control for my trouble. You gotta love the eighties! 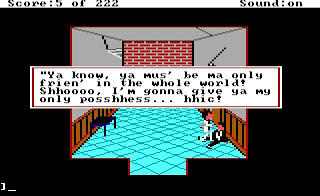 I feel like a better person you know. Like I really helped someone in their time of need.

That TV remote allowed me to distract the pimp in the brothel next door by changing the channel to a porn station while I moved on straight past him. Upstairs was a hooker lying on the bed, waiting for Larry to get what she thinks he paid for! I never intended to make Larry have sex with her, as I recall reading somewhere that you catch an STD if you do so unprotected, but for the sake of reviewing the game properly (i.e. as a man there’s absolutely no way I could not watch it happen at least once), I made it happen. It’s testament to the genius of Al Lowe that watching a black box with the word censored written across it simulate the motions of sex is both highly suggestive and hilarious. Anyway, I left the hooker smoking a cigarette and ignoring me entirely, and restored to a prior save game, determined that the Larry I play would have a better first experience, not to mention survive to talk about it. I picked up the box of candy from her room, which would later be given to Fawn, and left by the window. It’s here that I came across the first thing that has stumped me. I can see a bottle of pills in the next window along, but I can’t see any way to reach it. Every attempt results in Larry falling to his death, so I can only imagine I’ll find something to help me retrieve it later in the game. 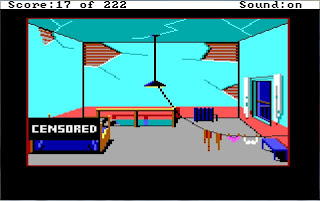 I do have a question for the readers as it’s one that won’t affect my ability to get through the game (at least I don’t think it will). After picking up the rose, the ring, the candy and a hammer from Lefty’s Bar and its surroundings, the only option available to me that I could see was to holler a cab. I found nothing in any of those first few screens that suggested where my next location should be, so since I knew that Larry visits a casino at some point, I told the cab driver to take me there. I believe that was the right thing to do as not only have I won $250 on blackjack (by saving and restoring admittedly), I also found a pass to the disco, which is where I came across Fawn. Is there anyone or anything that gives you the idea of going to the casino in those first screens? I can’t imagine you’d just be expected to guess this, but I could be wrong. Or perhaps by guessing the casino I’ve skipped part of the game?! Anyway, as soon as I met Fawn at the disco, the game has moved extremely quickly. After all my lame pickup lines failed to get her to sleep with me, she hinted at how much she loves presents. I just happened to have a few nice items on me, and she willingly accepted my offer to dance once they were in her possession. The dance scene has to be seen to be believed so I won’t even try to describe the awesomeness. 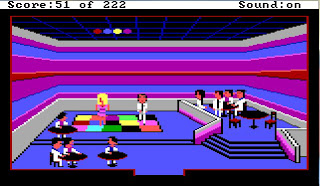 I have to admit that I was very surprised at what happened next! Of course it wouldn’t make sense that Larry would reach fourth base so early in the game (if you ignore the possibility of the skanky hooker), so I kept expecting Fawn to disappear with the presents and never show up again. Instead, she met me at the chapel where we got married in a sidesplittingly routine service, and now the two of us have made our way to the honeymoon suite of the casino and are preparing to get down and dirty. Of course I’m still expecting everything to go wrong and for Larry to have to start looking elsewhere, and Fawn’s request for champagne seems to be yet another delaying tactic that will most likely lead to another. Turning on the radio in the suite results in a commercial advertising wine delivery with a number to call, but the only phone I’ve seen to this point has chewing gum stuck in the coin slot. When I finish this post, I’ll be trying to find another phone elsewhere in the game, but I have a feeling I’ll be required to take a cab to find one. Leisure Suit Larry is an immensely entertaining adventure game so far, filled with laugh inducing details and sexy banter that has me wanting more. I simply can’t concentrate on writing anymore while Fawn is waiting for Larry on that bed. It’s my duty to get the little guy the action he so obviously deserves! 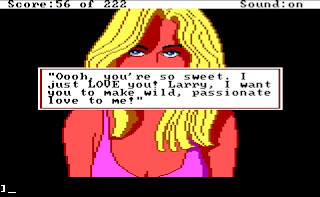 Who can blame you babe. You never really stood a chance!
Posted by The Trickster at 22:43