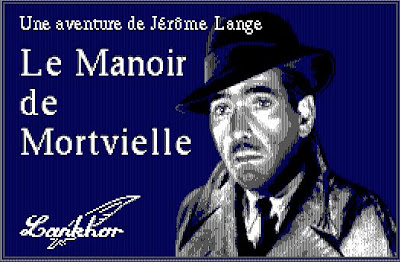 The twelfth game I’m playing for the blog is little known French game Mortville Manor (at least it seems to be little known outside of France). Created in 1987 by Lankhor, a fusion of two other companies called Kyil Khor Creation and Béatrice & Jean-Luc Langlois, the game was originally developed for the Atari ST before being ported to Amstrad, Amiga and PC in various languages. It’s the first of two games to put the player in the shoes of private investigator Jérôme Lange, with the sequel being 1990’s Maupiti Island, which was based on a tropical island and seems to have had a much more widespread release. Mortville Manor is based in 1951, where Jérôme is called in to solve a murder mystery in a grand manor. I know little more than that, other than the standard “all is not as it seems” style marketing that accompanies all games of this type. The game seems to be most well known for being the first to utilise speech synthesis, which is another way of saying artificial human speech (think Stephen Hawking). 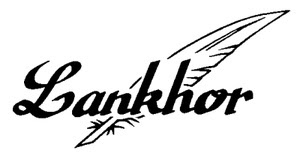 Developed over thirty games, but would always be known for Mortville Manor

Mortville Manor is without doubt the most underground game I’ve played so far for this blog. There is very little information on the internet about it and I was very close to just ignoring it and scratching it off the list. There were two things that made me decide that I should hunt the game down and play it. Firstly, reader Daubeur suggested that he’d really like for me to give it a shot (yes, I take requests...within reason) and secondly, I can’t ignore the fact that the game was the first to use speech synthesis, making it significant to the evolution of the adventure game (which is what this blog is all about at the end of the day). However, making the decision to play the game was the easy part. Finding it has turned out to be something much more difficult, and has required some dexterous Adventure Gamer rules loopholing to achieve. Before I describe what I plan to do to play Mortville Manor, I wanted to quickly thank all those people that spent time trying to track it down for me. You know who you are!

While there are quite a few sites that make reference to a DOS version of Mortville Manor in English, including Moby Games, there are others that say that it was released for only French and German speaking audiences on that platform. The latter seems likely to me as I simply cannot find a PC version of the game in English, but there’s no shortage of downloads available in the other two languages. There’s no way that I could play through the game in French or German, so I decided to try something a little different to complete my mission on this occasion. I’m going to play the Amiga version of the game, and with the knowledge I gain from that experience, will make my way through as much of the DOS version in French to be able to rate it. From what I can tell from the small amount of time I’ve spent in both versions of the game, the interface, plot and even the sound, are almost identical, so it’s really only the visual experience and possibly the atmosphere that I’ll need to focus on to get a good feel for the PC version of the game. 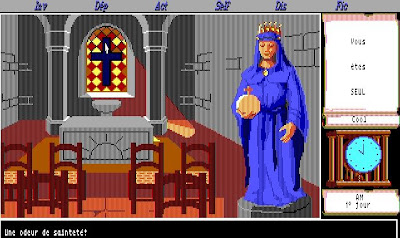 The chapel in the PC Version of the game

Having spent the better part of my childhood permanently attached to an Amiga, I have to admit that I was pretty excited to get n emulator up and running, with the possibility of one day playing through some of my old favourites, but as with everything to do with my attempts to play Mortville Manor, that turned out to be a learning experience. It turns out that you need to configure the emulator you’re using to match the game you’re playing, as many games made use of different hardware components available for the Amiga platform. Thankfully I came across Amiga Forever, a website devoted to Amiga emulation, which offers various purchasable applications that make running Amiga games simple. The basic $9.95 Value Edition of Amiga Forever (which comes with 40 games installed and ready to go) will play any game compatible with the Workbench 1.3 ROM, of which around 70% of Amiga games are. I checked out what I needed to play Mortville Manor and it turned out 1.3 would do, but still decided to dish out $29.95 for the Plus Edition (which comes with 100 games) as that will allow me to play any Amiga game I want at a later date. 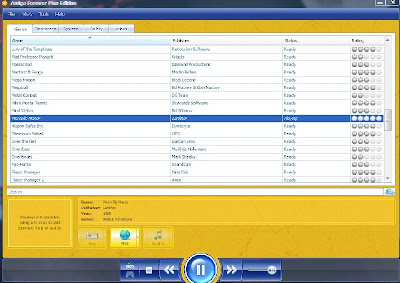 The Amiga Forever interface. Definitely worth the money!

Now that Amiga Forever is installed on my PC, all I needed to do is double click on the ADF file that I downloaded for Mortville Manor to add it to the long list of games I have available in the interface. The software does the rest! As for the PC version I will be playing, I ended up downloading the ZIP file from www.lankhor.net (I just kept clicking on the French headings until I found the one with game downloads), which is a package containing four versions of the game. Versions 2 and 3 don’t seem to run in DOSBox 0.74, version 4 starts up but crashes as soon as the intro completes, but version 1 seems to run perfectly well. I found a manual (that contains some truly horrible English) at the same site, which describes the fairly obvious interface. More importantly, it gives a few hints about the relationships of the Mortville Manor inhabitants, which I assume will come in use at some stage. Well, wish me luck...Detective Lange is on the case! 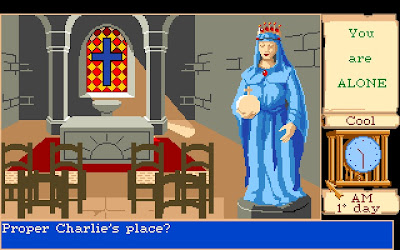 The chapel in the Amiga version of the game.
Posted by The Trickster at 22:10