Another game down, another PISSED rating post. I have a feeling that Leisure Suit Larry has a very good chance of topping the leaderboard, despite wishing it were a tad more challenging. Let's see if the pure enjoyment factor can overcome this weakness.

Puzzles and Solvability
As I’ve mentioned in the previous post, Leisure Suit Larry borders on being too easy, and I think there are numerous reasons why that came about. Firstly, it’s based on an interactive fiction game, and while some of the puzzles may have been challenging in a text only environment, having a graphical interface makes the solutions a lot more obvious. Secondly, I really do think that Sierra’s first foray into play testing resulted in too much hand holding. It seems to me that any frustrations that the test players experienced were “corrected” before release, with the resultant game basically telling the player what to do all the time. A good example of this is Larry’s conversation with Faith. Rather than Faith making some ambiguous comment that if thought about the right way could lead to a solution, the “narrator” of the game tells the player “perhaps some medical stimulant would help”. The up side of this hand holding is that it’s difficult to get into a dead end situation in Leisure Suit Larry. It’s certainly possible to have an unfinishable game (if you eat the apple or give an item to the wrong person), but the player is pretty much told outright that they’ve screwed up, and can therefore reload before the trouble starts. Balancing it all out…
Rating: 5 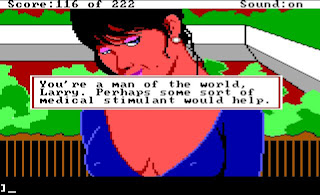 Hmmm...this is tricky. Um (scratches head)...oh I know! I can try giving her these medical stimulants!!!

﻿Interface and Inventory
There really is nothing to say about the interface and inventory of Leisure Suit Larry that I haven’t already said in previous Sierra games. The interface is exactly the same as it is in the likes of Space Quest, with the main difference being the amount of effort the developers put into making just about every command you can think of result in something (normally pretty funny) on most screens. This makes the text parser feel better, even though it has the same strengths and weaknesses as always. The inventory is just as you would expect, so I won’t waste any more time discussing this category. It was 5 for the last few, so it’s 5 again.
Rating: 5 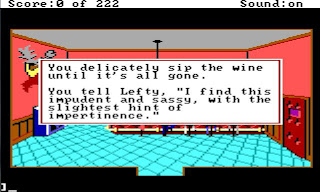 I find the interface to be acceptable and adequate, with the slightest hint of sufficient

Story and Setting
The story of Leisure Suit Larry is more than a little immature and juvenile, yet it’s so laugh out loud funny and entertaining that you won’t care. Who can’t be entertained playing a 38 year old loser virgin, trying his luck with numerous women of varying quality over a night of alcohol, gambling and smut? Well...feminists I guess...and perhaps fundamental zealots...and come to think of it, I don’t think my mother would really enjoy it very much, but you get my point! The 40 Year Old Virgin movie that came out a few years ago uses pretty much exactly the same formula with similar success, targeting the same male dominated market. Al Lowe clearly played Space Quest as well, as he brought across two of the features that made that game so funny, being hilarious death sequences and a mocking narrator. Larry doesn’t just fail...he fails badly, and is normally killed in extremely unfortunate circumstances (drowned by a leaking toilet, arrested for bestiality after taking the stimulants himself, having his penis bitten off after licking the hooker etc.). Even when he doesn’t die, the narrator makes sure the player knows just how useless Larry is and indirectly, how useless they are. It’s a very short and shallow story, but it’s also the most fun I’ve had since starting the blog, so it’s a 6.
Rating: 6﻿ 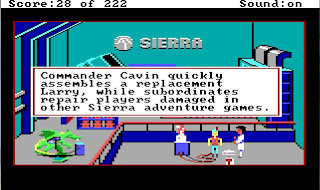 Just as in Space Quest, some of the best moments occur when you die

﻿Sound and Graphics
You can’t discuss the sound in Leisure Suit Larry without talking about the theme track. Al Lowe, a jazz saxophone player, apparently came up with it in about 20 minutes, but it’s one of those classic, immediately recognisable tunes that stick in your head. I can’t say I really recall any of the music from the rest of the game, apart from the pretty awful music that accompanies Larry and Fawn’s disco dance. Overall, the sound is minimal and suffers all the same quality issues that came with mid to late eighties PC games. The graphics are also a mixed bag. Quite a few sections, such as Lefty’s Bar and the Convenient Store are based around a really eye-twinging light blue, which is made all the more obvious when the game moves to more successful darker tones, like the disco interior and the chapel exterior. Looking at all the screenshots I’ve collected, it’s not hard to see why later games, such as The Secret of Monkey Island, would use almost entirely darker colours, as it’s just simply more attractive. Last but not least, the close-ups of the girls are actually pretty good for the time. Plenty of Sierra games had already included lines such as “you see the most beautiful woman you’ve ever seen”, but they were normally accompanied by grotesquely pixelated atrocities that made you question the main character’s judgement. In Larry, the hooker is suitably skanky and Fawn, Faith and Eve range from mildly pretty to downright sexy, in a two dimensional, 16 colour kind of way.
Rating: 5 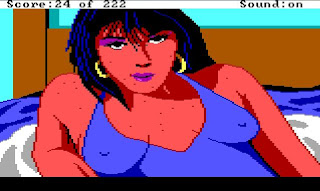 The Hooker: I just couldn't make Larry go there!

﻿Environment and Atmosphere
The world of Lost Wages (get it?) is full of seedy details. Even if you ignore the fact that a dirty bar, a brothel and a casino rule the landscape, the minor characters that Larry comes across have a consistently sordid quality. Raging alcoholics, flashing grandpas, naked men selling apples, porn-obsessed pimps, there are very few people in this town that you’d want to introduce to your mother (I bet no-one’s ever mentioned their mother twice in a Leisure Suit Larry review before!). Overall, unsurprisingly given the plot, Leisure Suit Larry’s atmosphere is all about sex! Not the sensual, loving type, but the filthy, sweaty type. It’s this naughtiness that no doubt made the game so attractive to teenage boys, who at the time were themselves struggling to rid themselves of their increasingly burdensome virginity. Al Lowe and co. really nailed it, pushing the boundaries of what could be considered appropriate in a video game at the time while remaining joyfully light-hearted and entertaining. It has to be a 7.
Rating: 7 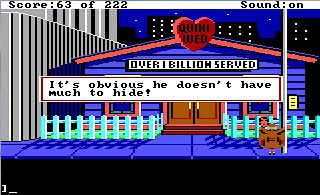 This has absolutely nothing to do with anything, which is why it's so awesome

﻿Dialogue and Acting
This is yet another category where Leisure Suit Larry succeeds, and probably exceeded anything that had come before it in the graphic adventure genre. The game wastes no opportunities, with a large majority of the narration and description being hilarious and highly suggestive. Spending the time to look at every item in every room doesn’t just assist in figuring out what to do in the game, the resulting descriptions are a constant source of entertainment and hilarity.  Most of the characters that Larry meets on the way have idiosyncrasies and impediments, some of which border on racist (“This no library – no leeding”), and all the slurring and ticking gives real character to Lost Wages. While the banter between Larry and his prospective lovers could be considered the first real two way conversations in the genre, they’re limited to a few lines and the player has no real options available that affect the outcome, so I can't really add points for that.
Rating: 6 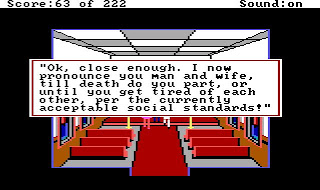 The drunken, cynical priest is another comedy highlight Well there you have it! Leisure Suit Larry takes the lead. Comparing the individual ratings to the previous leader, Space Quest, it actually has the same numbers in every category apart from Puzzles and Solvability. I think this is fair, as both games are of a very similar quality and both emphasise humour rather than intrigue, with the main difference being that Space Quest had quite a few uncommunicated dead ends. This difference means most players would have spent twice as long completing Space Quest, but this doesn’t translate to the game having twice the gameplay. I feel comfortable with this result and do feel that Leisure Suit Larry is more than just "that funny game where you have to make a virgin have sex".
Posted by The Trickster at 10:45