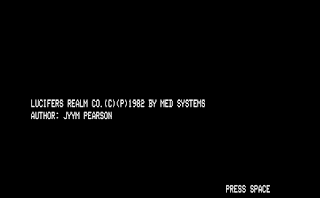 It’s time for the next game in our Med Systems marathon, and it’s another entry by our old acquaintance Jyym Pearson. I have played through The Curse of Crowley Manor, Escape from Traam, Earthquake - San Francisco 1906, Saigon: The Final Days and The Institute for this blog, and now it’s time to tackle the most notoriously difficult of them all (according to its reputation at least): Lucifer’s Realm.

This game had appeared in my research every now and then even before my interest in Med Systems was renewed. I was unaware that it was written by Jyym Pearson until quite recently but it pops up in recollections of adventure gamers from the 1980’s more often than not, it seems, if only for its notoriety. That said, I’m not alone on this journey and things will be a bit different this time. The incomparable Jason Dyer over at Renga in Blue suggested we blog about the game simultaneously, and I’m quite excited about it. His first post may or may not be up already, and our second posts will be released sometime during this weekend. I’m a bit ashamed that Jason has already caught up with me although my own marathon is limited to Med Systems games only while he tackles ALL THE ADVENTURES! If you don’t know his blog yet you should check it out right away – he really sticks it out with the good, the bad and the ugly and has turned up a lot of forgotten gems along the way. It’s a constant source of entertainment and meticulously researched bits of history about our beloved genre, the adventure game.

Because Jason’s posts tend to be a bit shorter than ours and we usually tackle a missed classic in no more than two posts we will do it a bit differently this time around. My posts will be a bit shorter, too, and there will be more of them in order to really dig deep into the whole experience of blogging simultaneously. This is very much in keeping with my experience of playing Lucifer’s Realm so far because this game is really dense!

When I played through The Institute some time ago, I mused about Jyym Pearson’s special treatment of death as a narrative device and a gameplay mechanic. Lucifer’s Realm proves me right from the very beginning as you start out in a hospital bed, and you’re very close to death. 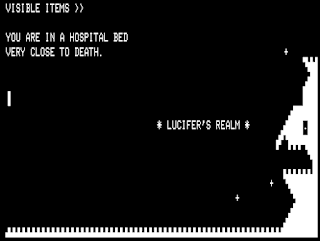 This is usually the final screen of a game, not the first one.

I use my standard vocabulary for Jyym Pearson games and LOOKing without an object lets me find out that tubes run from my nose and arms. When I LISTEN, I hear screaming, and when I LOOK again, a doctor is talking to a nurse. One more LISTEN reveals that the doctor tells her that I will die very soon. This must be one of Pearson’s trademark scripted events. In many of his games, those were quite enjoyable from a narrative point of view but didn’t offer much gameplay. After LOOKing again, the screen kind of melts and I find myself in front of a huge podium surrounded by glowing clouds.

There’s a bearded man here, and if I talk to him he tells me: “The judgement is at hand. The record of your life is in my book”. I try READ BOOK but unsurprisingly there’s no backstory in this game. However, he sums it up in two more sentences for me anyway: “Your life was full of evil. The path is clear.” Finally an adventure game in which I can relate to my player character.

After three bouts of talking to the man – who must be Peter for all I know about Christian mythology – I am thrown into Lucifer’s realm. A horrid voice (not a hollow one for once, mind you) welcomes me to his kingdom. I find myself on a narrow ledge above a fiery pit.

Now I know that Lucifer’s Realm is about Hitler raising an army in hell in order to overthrow Satan himself or something along those lines. This Jyym Pearson game begins with the player character’s death which is a nice touch and certainly quite innovative for 1982!

I fumble around for a bit before I try to JUMP down into the pit. I land back on the ledge but some crack widens. I have no idea what that means but maybe it’s not the right solution. I can CLIMB DOWN, however, and find myself in a small pink tiled room. This must be what hell is all about. The room is half full of water and the crack is now located above. It must have opened after I had jumped, so my idea was not for nothing, it seems. Examining the water reveals a chain, and when I pull the chain, I fall through a drain into a muddy cave. There are two doors to the south, one of them is red, the other one is green. Also, there is a billboard here.

Reading the billboard gives me the scoop: “One of my subjects, A. Hitler has formed an army to attempt my overthrow.” It must be the devil’s billboard. When I try to open one of the doors, the game helpfully informs me that there is more to read: “Anyone bringing me the proof will be freed from hell. Signed Lord Satan.” Sounds like a fair deal.

I enter the green door first. There’s a dark tunnel taking up two screens. At first I think this is a maze but it’s only two rooms with identical descriptions, just like that cave in Escape from Traam. South of the tunnel, there’s a huge damp cavern strewn with human remains. Also, the room is full of decaying flesh. What is it with me and decaying corpses in adventure games these days? 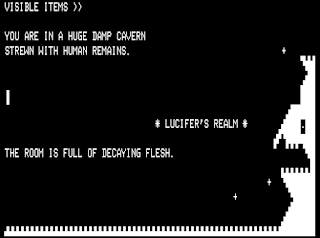 I can pick up one of the human skulls but that’s about all there is to do here. I head east and find John Wilkes Booth there. First he is described just as a gentleman with a pistol but when I look at him, the game identifies him for me. I’m stumped here for a while and Booth shoots me dead a couple of times before I try to kill him first. This makes him want to strangle me for some reason and I barely escape into the huge damp cavern from before. Now there’s a long rope lying here. I’ll take it, it’s progress!

Dying doesn’t seem to be of any consequence. You start back above the fiery pit but your inventory remains intact, so it’s not too bad. I’m very happy about that. Why? You go ahead and try to save and restore a game on a TRS-80 emulator!

The next breakthrough requires distinct knowledge of Jyym Pearson’s previous games. They have taught me to not only LOOK several times but also LISTEN. They have also taught me to FEEL my way through the darkness. In short, you need to use all of your senses in a Jyym Pearson game. And if there’s decaying flesh to SMELL, I’ll gladly do it (in a Jyym Pearson game). For my trouble, I am told that “a horrible smell comes from under a large rock”. I can CLIMB ROCK and enter a dark blood soaked pit full of death and decay. Sweet!

I don’t find anything to do here, though. If I look blood, the game suspiciously tells me: “not now”. Maybe later? Another interesting fact: when I return here later on, the game tells me that “The smell’s to(o) strong.” I don’t know how to enter the pit again at this point and hope that I haven’t already broken the game somehow.

Back in the muddy cave I try the red door next. Behind it there’s another dark tunnel. There’s only one new exit to the east and I find myself in an eerie mist shrouded grotto. A Nazi S.S. officer blocks my way, and upon closer examination it turns out that he’s Adolf Eichmann, one of the major supporters and organisers of the Holocaust, truly a horrible criminal in real life. In the game he’s just another obstacle. I can talk to him and he asks me whom I want to see. “Hitler” is the most likely choice, so I take a stab at this rather tasteless bit of role-playing. It works but he asks me why. I really don’t know, so I say “kill him”. Eichmann doesn’t react to this but the game tells me “You’re too kind.” I try a few more answers but it seems that this is a guess-the-phrase situation, so I decide to stop here for the time being and come up with a list of possible wordings to be able to progress.

My map is surprisingly small for one hour of adventuring but the opening is quite the bottleneck. I have described some situations as if I had come up with the correct solution right away but that was hardly ever the case. It took some time to get the parser to cooperate in almost every situation and so far I’m not exactly fond of the game. After one hour, it feels like a compilation of the worse moments from the other Jyym Pearson games. Here’s hoping that will change.

And don't forget to guess the score!

Note Regarding Spoilers and Companion Assist Points: There's a set of rules regarding spoilers and companion assist points. Please read it here before making any comments that could be considered a spoiler in any way. The short of it is that no CAPs will be given for hints or spoilers given in advance of me requiring one. As this is an introduction post, it's an opportunity for readers to bet 10 CAPs (only if they already have them) that I won't be able to solve a puzzle without putting in an official Request for Assistance: remember to use ROT13 for betting. If you get it right, you will be rewarded with 20 CAPs in return. It's also your chance to predict what the final rating will be for the game. Voters can predict whatever score they want, regardless of whether someone else has already chosen it. All correct (or nearest) votes will go into a draw.
Med Systems Marathon Overview: