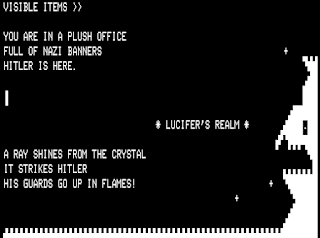 So here I am standing on a circular pillar in the center of a vast room. The pillar is sinking, bringing me ever closer to the floor which is crawling with spiders. I fiddle around with the pillar and notice how a beam of light shines on it. As this is a near-death experience, “look light” seems appropriate, and I find out that there’s a hole in the roof with a hook on it. Alas, I keep botching my next move for a while. After three turns the situation resets (I assume) – the screen melts and I start over again on top of the pillar. This is like a quick-time sequence! I try “press X” but predictably that’s not it.

As always be sure to check out Jason Dyer's simultaneous playthrough on his excellent blog Renga In Blue!

Time to get my tongue out of my cheek, you say? That is correct. Frustratingly, after three times three turns I am swarmed by huge spiders and find myself back at the start of the game. This is slowly becoming a truly hellish experience. I try “throw chain” this time and it works – it is caught on the hook and I can climb out of there.

I emerge in a small ventilation duct. There is a small canvas on the wall. Also, the description of the chain is the same as before in the steel walled room so I assume I have to pick it up again. “Pull chain over hook” doesn’t work this time, so maybe it’s not necessary and I’m wrong.  The canvas is very thick and as there is no other exit I look around. There is another ventilation duct to the east with a vent to the south. That one leads to Hitler’s office but the game won’t let me barge in there just like that. I try opening, moving and breaking the canvas. Saying “Lucifage” doesn’t work, either. “Cut canvas with dagger” does, presenting me with a way out of here. The parser will stop at nothing to wring a few more minutes out of the game, though. Going south (where the new opening is at) does not work. “Go opening” does not work. “Enter opening” does not work. I need to use the words “Climb opening” which I probably wouldn’t have tried in a game by anyone else but Jyym Pearson.

I am in a bright room with crystal walls and floors. Am I still in hell? There is a clear stone there with a slit in the side and blue jewels around it. Blue jewels? You mean like those on my golden sword? “Insert sword” does the trick and a piece of the stone breaks off. I now have the mysterious crystal bar and can hear Hitler shivering from a mile away. Can’t wait to burn him with my crystal-powered light beams!

So I crawl back into the regular ventilation duct which leads to Hitler’s office. I can’t go south or “climb vent” so I try some other stuff. Nothing works and my inventory doesn’t help. Maybe I need to remove the cover somehow? Because the cover is not a visible item I try to kick the vent, unblock the vent and move the vent. “Move vent” actually works: the vent tilts, the game informs me, and forms an opening. When I try “climb vent” again now I can finally enter Hitler’s office.

I swear I just want to take a look around before I decide what to do next but the second I type “look” and hit the enter button a ray shines from the crystal and strikes Hitler. And there’s more: his guards go up in flames. Boy, that escalated quickly! I can still examine Hitler who’s lying on the floor and see that he has dropped his silver crown. Did Hitler ever wear a silver crown? Moreover, looking at the crown reveals that it’s magical. Did he somehow make the acquaintance of a certain King Graham in hell?

Moving on from Hitler’s office I can only head back to the steel walled rooms. However, the chain is missing and I can’t climb back to the dimly lit room. That makes me wonder if I did have to pick up the chain after all. I go back to the small ventilation duct and try again but the erstwhile successful “pull chain over hook” goes unrecognised now. The simpler “unhook chain” works, though, and I can pick up the chain, carry it over to the steel walled room, “hook chain” and climb back down to the dimly lit room.

I backtrack through most of the rooms and thankfully, one thing has changed: John Wilkes Booth is gone. I can now open the huge door and enter a black volcanic cavern with rough steps leading east. Looking reveals a smiling snake. I try talking to the snake and it gives me a hint to drop the crystal here. Or is it a trap? Anyway, I drop it and the snake swallows it. I have a bad feeling about this! 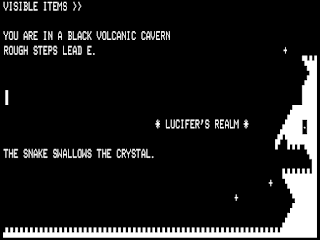 May be some parable I’m unfamiliar with. Or maybe just some wacky writing.

Because I’m unable to save my game I don’t try to proceed without feeding the snake. If you want to give it a shot and report back in the comments, by all means: please go ahead! Or maybe Jason smelled a rat and avoided dropping the crystal? Whatever the case, I enter another pink-tiled room which is charred by fire. Fire and steam pour from the floor and I can’t pass. None of my items work and I can’t reach the iron door leading to the next room.

With no other exits and no other leads I revisit most parts of the game map (as you do in a Jyym Pearson game). Actually the tiles turn out to be a clue as there’s a subtle change in the other pink-tiled room: Some tiles have fallen off the walls revealing a valve handle. When I turn the handle I get the typical feedback the game gives me when something works: an enthusiastic “O.K.” Nothing changes, though. Maybe this works a bit like the famous flood control dam from Zork? I move back and forth between the tiled rooms after each turn of the handle and at some point (I don’t remember the number of turns necessary as I got the idea after one or two eventless turns only) the fire is out.

Behind the iron door there’s a huge satanic church, its pews crowded with monstrous creatures. The disturbingly informally named “Joe” Stalin and Lee Oswald are at the altar and leading a black mass. I go with the flow and sit down as well. Another look around reveals a trap door which is stuck. In Pearson logic this means I can’t open it but rather need to “push” it. I enter a horrid cellar full of burned corpses. There’s an altar with a door in it – once again I need to “move” the door to find a huge ball of wax. The only exit leads west into another portion of the cellar. There’s a crystal door leading south with a slot in it. None of my items fit in there but I find out that one of the corpses clutches a cloth sack with some silver coins inside. I can’t pick up the sack but I can cut it open with my dagger (“cut sack with dagger”) and pocket the 20 pieces of silver that may or may not be useful against vampires may or may not be able to spell their own name (or do the hep cats call him “D-Cula” these days?).

And that is it. I have run out of things to do (or obstacles in my way, really) and am seriously wondering if I should have ignored the snake’s advice in order to put the crystal into the crystal door with the slot. In hindsight that seems likely and I’ll try it again next time. I may well have reached a dead end. It’s my own fault. The Jungle Book taught me not to trust in snakes for a reason.