In the context of our current marathon, Microworld is a notable game in many ways. It’s the first Med Systems game that appears to not have been written by an in-house programmer, meaning that it was published rather than produced by the company because it fit the portfolio. Its creator Arti Haroutunian (not to be confused with the famous Armenian cook Arto Der Haroutunian!) built a reputation on action-based games throughout the 1980’s and early 1990’s and possibly relocated to Salt Lake City to work on Disney games for Avalanche Software in the 2000’s. His ludography is full of holes and a mystery in its own right but I shall only be concerned with his first game Microworld which is different from all of the others in being a text adventure. It is furthermore the first Med Systems game released for the Atari 400, and I shall take a look at the differences between the TRS-80 version and the later port after having finished the game.

The concept of Microworld must somehow seemed attractive to Med Systems’s founder William Denman as it was not only an adventure game but also sort of a counterpart to his very own The Human Adventure which I’ve played for the 1980 summary. In The Human Adventure you enter a human body and move along veins and arteries in order to cure the patient’s disease(s). In Microworld you enter a TRS-80 and move along cables and circuit boards although I am not yet sure what’s your objective. Sadly, the manual of Microworld appears to have been lost, and I cannot know what kind of game it might have described. A 1982 issue of The Space Gamer apparently has a short review of Microworld by Allen L. Wold who describes it as a game “for the intelligent child.” Let’s see if I can keep up!

There is some confusion about the title of Microworld because of some magazine ad which Med Systems used to perpetrate in 1981. The ad describes Microworld as a “Journey to the Center of the TRS-80”, leading some people to believe that there was a lost Med Systems game with that Jules-Vernesesque title.

That’s all that I have to offer. Time to boot the game. The standard introduction at the beginning of the game tells me that “[t]he object of the adventure is part of the mystery you are to solve.” Suspicion #1: This game doesn’t have an actual plot. I also learn that it has a two-word parser, not all exits are obvious and the adventure is “quite large”. Suspicion #2: There will be mazes. Suspicion #3: The parser will be simple and some of the puzzles will be guesswork. I am told that the program “recognizes many words” and I should keep on trying. Suspicion #4: There will be guess-the-verb tirades. Also, the HELP command is not strongly supported. Suspicion #5: The HELP command works in one or two locations only. However, it’s the last sentence that scares me the most: “Remember, strange worlds can best be dealt with by strange [a]ctions.” Suspicion #6: There will be a lot of random and illogical stuff. 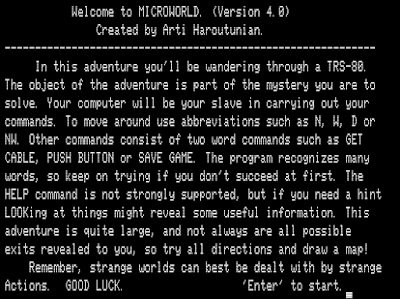 The first hour of gameplay

I start out in a white, featureless room. There is a calculator on the ground and a “familiar sight” in one of the corners. I grab the calculator and try to use it in various ways but nothing seems pertinent. “GO CORN(ER)” gets me to another section of the room, and the familiar sight turns out to be my TRS-80. If I try to use it I am told that it first needs a disk with my operating system on it, making this my first objective. And that’s it. There are no other exits and I can’t seem to do anything else. After a while I dabble with the calculator and find out that I can enter numbers but most of them are wrong. This has copy protection written all over it. As I don’t have a manual, I have to delve into the source code which, luckily, is kind of possible as there’s a version in BASIC I can use. I find a suspicious-looking number (1845) and, lo and behold, it works! When I enter “1845” I am teleported by the calculator (a good Med Systems tradition) and arrive inside the TRS-80. I’m not as alone as one might think, however – there are lots of electrons and other elemental particles hovering around. They direct me through a sequence of rooms with confusing links and exits; it’s a bit like mapping a very simple maze. I find some strange objects, and generally the room descriptions are very technical and complicated. If I want to progress from the first room, the primary windings of the transformer, I have to drop the calculator and am immediately moved to the secondary side of said transformer room. Here I find a dielectric coin which upon examination reveals a hint: “go PLUS on display error.” In a misty room a the cathode of a power diode to the north, I happen upon a “spinnifax”. What could that be? A spinifex plant, maybe? Or the bird of the same name? Examining it tells me it’s a very nice specimen, and I cannot really make sense of it in the context of a TRS-80 computer. I find a 12V room, a 5V room and a negative 5V room. In the 5V room, there’s a crystal radio, and there is no exit from the negative 5V room. Fortunately, this first puzzle is rather trivial as you only have to examine the coin (as I did). “GO PLUS” does the trick and I end up in the resistor room. In the resistor room, there’s a lonely clock pulse. Upon examination, the game tells me that it’s “a perfect one period square *WAVE*”. These asterisks somehow confuse me. Didn’t Scott Adams use them to mark treasures in his adventure games? Is it the same here, or do they indicate something else? Boy, I sure wish I had the manual.

Going west from the resistor room sort of dead-ends me. I arrive at the computer’s five-part ground plane (north, center, west, east and south). In the western part, there are some “bumtrons” hiding under their newspapers. In the southern part, there’s a sign on the ceiling telling me that “my gain is your loss.” Another puzzle related to voltage, maybe? In the eastern part, there’s a glass cube containing a disk. Is this already the final item? I don’t find any way to retrieve it, and apart from an audio conditioning room and the adjacent 741 op-amp, complete with a bespectacled “isotopian” receptionist, there’s no way out of here. I’d restore back to the beginning but I think I may have explored all of the exits already. Maybe not, but I think the next step has to be some puzzle-solving. So far, it’s enjoyable if a little cryptic. Let’s see if I get it all figured out by the next post. And don’t forget to guess the score!