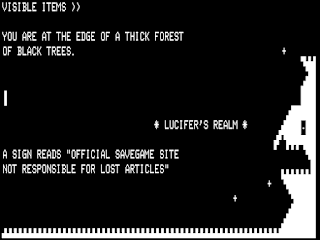 Note: Jason Dyer who is blogging about Lucifer's Realm simultaneously has already finished this game and I hope that he (or one of you) will be able to help me with my request for assistance below. I had planned on finishing the game for today's post, too, but alas it was not to be.

After some time away from the game I decided there were two more things I could try before I would start the game from scratch for the third time. And what can I say? Both were solid ideas and worked out in the end. Now what did I come up with? Looking at my inventory again I thought that I might need to melt the huge ball of wax in case there was something inside. Also, I decided I’d try to attack that snake with my trusty dagger – maybe I did need to feed her the crystal but there’s a chance to get it back somehow.

Both assumptions turned out to be generally correct. I tried to melt the wax using the candles found in the church where the black mass was being held. When it didn’t work right away I thought it may be due to the parser but actually that just wasn’t the solution. Fortunately it didn’t take me long to realise how blind I had been: the fires I had turned off by using the valve in the first pink-tiled room had to come in handy for this. I liked this puzzle a lot and it felt very infocom (yes, I am smugly using that as an adjective) to me. You actually need to leave the ball of wax behind in the room before turning the valve (only one time, it turned out, involving a lot of back and forth, and then one more time to turn the fire back off. I must have been confused by my initial futile attempts last time). Then you can pick up the iron club which was inside the ball of wax (no, I don't know how I should picture this either).

Killing the snake was pretty straightforward. When I tried it before melting the wax the parser flat out told me I had no weapon that strong so I knew I was on the right track. The club worked like a charm (get it?) but the crystal disappeared. My next idea was to go all the way back to the room where I had picked it up (or rather sliced it off) first – maybe now that the snake puzzle was solved (correctly?) I could slice off another piece. And that was actually the case. I found another crystal bar just lying there on the ground which, I assume, became available because the other crystal bar was removed from the gameworld. Maybe it was wrong to listen to the snake last time but at least the game makes it possible to remedy this (potential) dead end.

The next steps were surprisingly straightforward. I put the crystal bar into the crystal door with the slot (“put crystal bar in slot” was the only combination that worked) and found myself at the edge of a thick forest of black trees. A sign informed me that this was an “official savegame site” and that the game didn’t take responsibility for lost articles. Was this a clever advance notice to tell me that a maze was lying ahead?

The first maze in a Jyym Pearson game was not as bad as it could have been. The only tricky bit is that your items will vanish occasionally but it happens not that often so it’s quite easy to map it all. Fortunately I found out how to save and load a game state in Lucifer’s Realm when I gave it another look. “Save” and “load” won’t work but “save game” and “load game” will. The rest is up to the emulator. On the other side of it there’s a peaceful meadow with a white robed figure just sitting there among the grazing sheep. I must have slipped out of hell somehow, right? The figure (who, according to the parser, “appears ordinary”, just like everything else with no custom description) introduces itself as “the prince of peace and the way”. What is Jesus Christ doing in hell? The game has been more Dante’s Inferno than the Bible from the very beginning but it’s still a bit confusing. However, Jesus tells me to listen to the evil one again, and that he will grant me the power. Which evil one? (Hell is full of them.) And what power? But, alas, that’s all he has to say.

I chew on this for a bit and come up with three options – two because I haven’t met Satan yet. It’s down to either Beelzebub or Hitler. I try Hitler first but get killed by his minions so this was maybe the wrong choice. From the start of the game it’s not too far to the circular well so I might as well breathe them good old vapours again. I gain some new information, too: “My enemy needs the magic powers of the statue of Deecula but it is incomplete.” It’s a new clue! Scaramouche, Scaramouche, will you do the Fandango. Beelzebub goes on: “When Deecula is restored and its power glows, the crystal seals his fate!” Huh. It’s still pretty cryptic but I need to find something to complete the statue, I guess. When I breathe in the vapours for a third time (don’t try this at home) Beelzebub (I assume?) tells me about “the book of James….1st John..1:9..”. I look it up (in the King James Version, of course) and come up with this: “If we confess our sins, he is faithful and just and will forgive us our sins and purify us from all unrighteousness.” It takes me a bit longer than I care to admit but finally I return to Jesus to confess my sins. He replies that I am saved and shall go forward in his name.

Another part of the forest leads to a stone wall. I found out about this much later because my initial map has one wrong exit – I got sloppy after losing one of the items and assumed that two of the rooms must be the same while they really weren’t. Anyway, there’s a crack in the wall but the parser tells me that my inventory won’t fit. Am I wrong or is there a lot of Zork in this game? I drop all of my belongings (but have a bad feeling about this) and squeeze through the opening. On the other side there’s a neon sign saying “Leaving Black Forest Come Back Soon”. 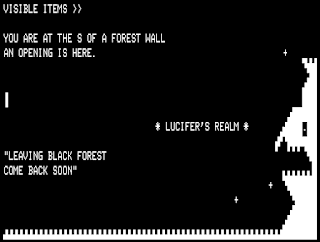 The only way onward is to the east. I find myself to the south of a rocky cliff and facing a huge stone door. It won’t open but I remember Jyym’s personal “sesame” and try “Lucifage”. The door jerks but still won’t open. Further to the east I arrive at a grand glass stairway glowing bright red. Judas Iscariot is blocking my way demanding a bribe. I need to find some way to get my inventory across the crack, possibly with the help of another magic word? With no way forward I take a break from the game but come up blank. I try to oil the crack to be able to squeeze through with something in my hand but nothing works.

I find out that the neon sign greets me with the question “Back already?” when I return to the Black Forest but I am stuck here for quite a while. Then I think hard about the two signs that are found on both sides of the forest and discover something interesting: When I drop my items below the first sign (“official savegame site”) the huge door will burst open when I say “Lucifage”. I can then climb up into a small curving cavern containing nothing at all. That doesn’t help me much but I suspect that the empty cavern is related to the puzzle somehow. Maybe I need to drop a certain selection of items? I try as I might but nothing works. I take a step back and study my map once more. If the savegame site is located outside of the forest I might need to drop the items in another safe place that is not part of the forest either. I try the meadow but it doesn’t work. The only other area that has a different room description from all of the other nondescript rooms inside the forest maze is one particular part of the forest in which “the trees turn green”. It doesn’t seem likely to me but I might as well drop my items here, I think. Yeah, might as well. No dice.

Finally, I try to drop both silver items (the coins and the crown) in either of the three locations because they are different from all of the other items. What’s more, I haven’t found a use for either of them and think that the silver coins might be the bribe Judas keeps asking for. Once again it doesn’t work.

So this is it. I’m at the end of my rope here. Usually I’d look for a hint but I know that Jason Dyer has already finished the game so he may be willing to drop me a rot13’d comment with a nudge in the right direction. If anybody else wants to help by all means please chime in: this is a REQUEST FOR ASSISTANCE! 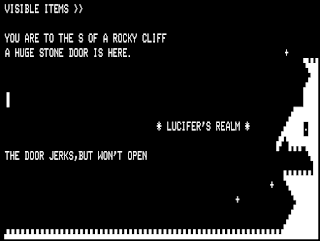 I thought this screenshot was appropriate for my situation.