If 1980 was the year of programming for Med Systems with a total of 14 releases advertised in various magazines, 1981 certainly was the year of advertising. Many Med Systems games, among them Deathmaze 5000 and Labyrinth, got more attention with belated reviews – in fact, Rat‘s Revenge which was released in September 1980 was only reviewed by the 80 Microcomputing Magazine in November 1981. This was all part of a larger focus on the TRS-80 as a gaming platform: Scott Adams’s Adventure International games had taken hold on the Tandy, and “micro games” certainly were a new trend.

While Med Systems released only five games (four of them adventure games) in 1981, they got a lot more media attention than before. The August 1981 issue of the 80 Microcomputing Magazine is especially noteworthy, as it contains a feature about micro games which quotes William Denman as well as an interview-based article about Frank Corr. Furthermore, the company name pops up in a few more general articles, and their 3-D adventures had apparently become a brand of their own. In the October 1981 issue of the same magazine, Med Systems was able to afford three full-page ads back to back which is quite an investment. The prices are probably not comparable with, say, late 1990’s game magazines, but still this makes Med Systems one of their major customers.

I’ll go into more detail about all of this once we reach the 1981 summary of this marathon but today I’d like to talk about Asylum. Now this is not only the most famous Med Systems game by far but also one with a very confusing backstory. When I started this marathon I thought that this was the game that had piqued my interest as I used to play an adventure game called Asylum on the Commodore 64. However, that was its sequel Asylum II (1982) which was renamed as Asylum for all subsequent 1983 (Atari) and 1986 (Commodore, DOS) releases. The 1981 Asylum is entirely new to me, and I’m looking forward to playing it quite a bit.

Asylum is another maze game but with more adventure elements than the previous ones. It is also the third part of the so-called “Continuum Series” but that brand name apparently only came up in late 1981. In Mike Nadeau’s aforementioned article about Frank Corr (titled “Frank Corr – Making the Ultimate Maze”), Corr suggests that in Asylum everything was “twice as good as Deathmaze”. He attributes that to a new routine they used to store graphics as data. Asylum is also supposed to be a lot easier than Deathmaze which suggests that there are possibly not so many arbitrary puzzles in it. I’d like that! The game was co-written by Corr and Denman and released in February 1981. Its vast success apparently led to a sequel, programmed by Denman only. This is also the last we’ll hear of Frank Corr although it seems that he had great plans for his next game which was supposed to be set inside a space station or a similar setting and use octagonal rooms.

According to the manual, movement is the same as in the other 3-D maze games. It also has some unusual verbs, like “tiptoe” and “charge”. To avoid guess-the-verb fights with the parser, it thankfully contains a vocabulary list. It’s also possible to form more complex sentences using prepositions or constructions around “all”, “everything” and “except”. One of the sample sentences from the manual is “give the cigarette to the guard” which sounds promising compared to the games I have been playing for the blog so far. Let’s see if all of this is really needed, though. 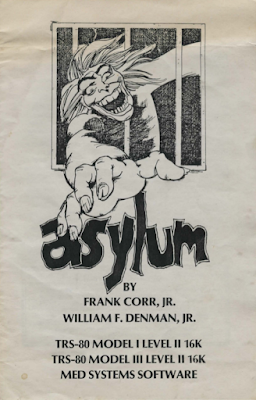 The plot is rather simple. You are an inmate in an asylum but the guards and doctors are still out to get you in even more sinister ways. Thus, your goal is to escape from the Asylum before the day shift returns. Asylum is also apparently an acronym for Adventure game Syndrome Leading to Ultimate Madness.

I’m not sure what to think about the information that Asylum is played in real time. Generally, I don’t really like real-time adventures, especially if they impose a time limit like this one. The game starts at 9:30 p.m. and a minute on the in-game clock is apparently equivalent to 40 seconds of real time. The game ends at 5:30 a.m. if you didn’t manage to escape until then.

Like in the other 3-D maze games I’ve played so far, only the maze itself is depicted, along with some simpler graphical elements such as doors or pits. The items are hidden away in boxes once more. However, some characters are drawn on the screen so you can distinguish between guards and inmates. I’m looking forward to see how that works!

The next section of the manual is the “Hints” section, so I’ll just skip that for now. Next up: the first hour of gameplay. For now, make your guesses and don’t say I didn’t warn you! 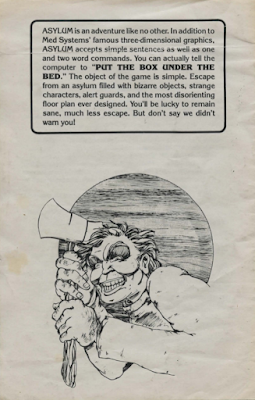