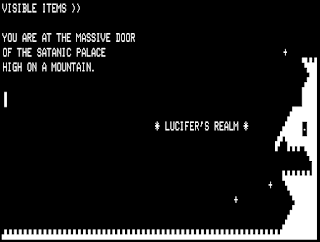 One of the advantages of playing through a game simultaneously is that if one of the two players gets hopelessly stuck (like I did) the other one may be able to help. And what can I say? Jason Dyer quickly came to the rescue with the words “Oh, you’re so close!” and four hints encrypted with rot13. His first hint read: “You are correct in that you drop stuff in one specific room in the forest, and it comes out in the cave. It's just a matter of finding the correct spot.”

Last time I had tried all of the spots that seemed likely to me: the room next to the stone wall, the room with the sign and the room in which the trees look greener than in the other rooms. My two options were now to try and brute-force it or to decrypt another one of Jason’s hints. Naturally, I tried to brute-force it first and was VERY lucky because I started with the correct room right away. Things seemed kind of fishy because I dropped the iron club in the penultimate room of the forest – before I reached the stone wall – and when I looked again it was gone. I chalked this down to bad luck because items had gone missing before but when I restored and the same thing happened again and again and with every item I’d drop I knew I was on the right track. Much later, after having finished the game, I decrypted Jason’s other hints and found out that you could “look trees” in each of the rooms to discover white marks on them, sort of like there was a waymarked trail through the maze. The last room with a white mark is the one where you should drop the items but I still have MAJOR issues with this puzzle and still think that this does not count as a clue at all. Why? Because the white marks also lead you to the stone wall which is at the end of the forest. Even if you discover them with the rather obscure move of typing “look trees” while no trees are ever mentioned (except in that one room where they look greener than in the others) in the room descriptions you wouldn’t expect them to be more than a means of simplifying the maze itself.

That said, I would have liked any of my own (wrong, admittedly) solutions much better than the actual one because they made at least an iota of sense. The actual solution just came down to trial and error. Incidentally, Jason had to take a hint here, too, which goes to show that both of us almost solved the game on our own – but that one thoroughly absurd puzzle threw both of us off track.

Well, enough of that. The remainder of the game was pretty straightforward. I picked up my items in the small curving cavern, bribed Judas Iscariot with the silver coins (which makes him cry, hinting at a very tragic kind of eternal punishment) and proceeded up the grand glass stairway to… be thrown back down by a tremendous force. I assumed that I may not have confessed my sins in this save state so I restored, confessed, did the whole thing again and...the items didn’t disappear. I remedied this by looking once more (blink and they’re gone - really I had only forgotten about this, see above) but then the massive door wouldn’t open, no matter how many times I shouted “LUCIFAGE” (in the game as well as in front of my computer). You may have got the impression that I’m not a big fan of this puzzle but this really pushed me over the edge. I had to backtrack to the other end of the forest and then back to the huge door again and then it worked. Last time I must have done all of this backtracking coincidentally but talk about throwing you off track with minor invisible triggers!

Anyhow, I arrived at the massive door of the Satanic Palace high on a mountain. Far below two armies fought (Hitler’s and Satan’s, I guess) and there was a door that “must weigh tons”. I couldn’t open the door but knocking did the trick. I heard massive footsteps approach and then “Something” admitted me to the palacial waiting room. A beautiful angel was floating above calling my name. She told me to give her the crown because only she could save me. The final “please!” made me suspicious, though. It seemed a bit over the top. I was still a bit sore that I had handed the crystal to the snake so quickly and just ignored her. (Later I was curious to see what would happen if I gave her the crown and it’s actually a trap. She transforms into a monster and you find yourself back at the start of the game.) 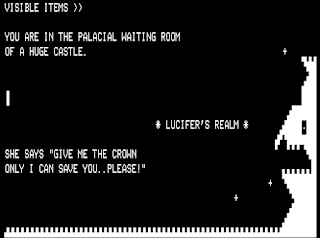 Come to the Sabbath!

The only way forward was south. I finally met up with Satan whose “monstrous shape [sat] on a crystal throne”. He smiled at me with an incredibly evil smile. I tried to interact with him in various ways but the parser just replied “What?” again and again. Getting rid of the crown wasn’t easy, either. I was unable to throw it at Satan or give it to him. I couldn't wear it, either. I could only drop it. When I did, the screen flashed like crazy and then… 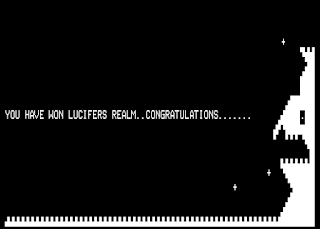 At this point I would normally play through the ports of the game to point out the differences but Jason Dyer already did a stellar job in this regard so I have nothing to add. The parser of the original version seems to be a lot more finicky (“breathe vapors”!) and there’s a nice self-referential ending in the Apple ][ version that I missed out on. Also, the art looks really good, especially when compared to the illustrations of earlier Jyym Pearson games.

The experience of playing through such an old (and quirky) game at the same time was really worthwhile. Did you enjoy it as much as I did? Maybe Jason will be game to repeat the exercise for the sequel The Paradise Threat which should be coming up soon. For now I am curious to see if he agrees with my rating and would like to thank him again for assisting me with the most frustrating puzzle I have encountered in a very long time. Up until now The Institute has been the gold standard for Jyym Pearson games. It scored 35 points which is pretty good for a text-only game. Let’s see how well Lucifer’s Realm does. In the beginning I had trouble getting into it but I enjoyed the middle part quite a bit. I know that I’m notoriously easy to please but since the games are so unforgiving you’ll just have to bear with me, right? Right.

Puzzles & Solvability: Many of the puzzles were straightforward – it was mostly parser issues that kept me from simply waltzing through large parts of the game. The gory atmosphere was complemented by appropriate puzzles: I had to hold my nose to progress to a place which smelled horribly. And I needed to “borrow” Jim Jones’s dark shades in order to read a secret word where the light was too bright. I’m not a fan of Jyym’s “do it at least thrice to proceed” formula but Lucifer’s Realm was probably not intended to be played by people who had never solved one of his games before. I really liked the puzzle with the giant ball of wax and I really loathed the giant road block that was the final puzzle. Not because it’s a bad puzzle – it’s actually pretty clever – but because it’s badly designed. I have ranted about it enough already, so I’ll just say 4 and be done with it.

Interface & Inventory: The parser seemed more troublesome than in Jyym Pearson’s other games and that is saying something! I commended The Institute for its relative lack of guess-the-word games but Lucifer’s Realm has a lot of them. I really can’t go higher than 2 this time.

Story & Setting: The pulp magazine vibe of the game works in its favour but the story is quite thin. You need a lot of outside knowledge to make sense of it all and the premise is a lot more interesting than the actual narrative. I truly admire Jyym Pearson’s dedication to try something new in each of his games (up until now, at least), though. It makes them consistently interesting especially regarding their vintage. 3.

Sound & Graphics: No sound and the ASCII art is a nice touch, as always: 1. The Apple ][ graphics look really nice and even better than those of The Institute (which were a bit hit & miss in hindsight) but I haven’t played that version (yet) so I’m hesitant to judge it based on a selection of screenshots. Do head over to Jason’s blog to get a good impression, though!

Environment & Atmosphere: Silly and gory. Didn’t we just have that with Dare to Dream? The gameworld is closer to Dante than to the Bible but that’s really not a bad choice. Most situations feel like worthwhile challenges because the game manages to give your mission at least some degree of urgency. It’s one of the game’s strengths: 4.

Dialogue & Acting: The dialogue is nothing to write home about but that’s to be expected in a 1982 game based on Scott Adams’s 1978 adventure game engine. There’s no acting, of course, and the quality of the descriptions matches neither the austerity of Earthquake 1906 and Saigon nor the Freudian nonsense of The Institute. I can’t go higher than 1 here. 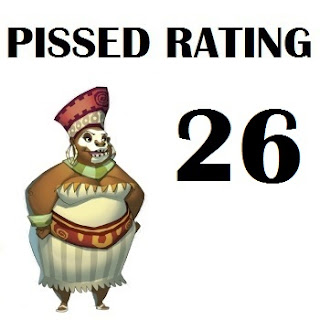 That makes only 25 points for Lucifer’s Realm which places it ten points below The Institute. It seems harsh, I know, but looking back it’s a bit weaker in almost every category and doesn’t exceed the previous game in any of them. I know that the PISSED rating is bound to be highly subjective and naturally the game rubbed me the wrong way with its ludicrous final puzzle. All things considered I enjoyed it much more than 25 points but – as I said – I’m easy to please. For all of those hardcore adventurers out there who wouldn’t have needed a hint near the end I’ll award it a discretionary point to give it the benefit of the doubt: 26 points it is. That’s one point lower than Earthquake – San Francisco 1906 which seems about right. Leo Vellés guessed a score of 32 and thus came closest – congratulations, Leo!

I’ll finally post my final rating of Dare to Dream soon, and then we’ll have two exciting missed classics you won’t be expecting – one by our esteemed and prolific MorpheusKitami and one by a new contributor. Stay tuned and be sure to meet me in the comments section!