L.A. Law: The Computer Game – Case #7: The Revenge of the Milquetoast 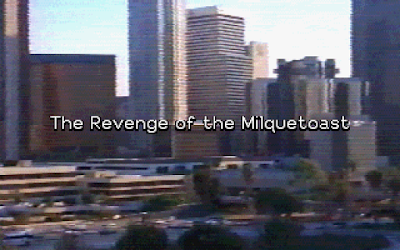 This game is terrible.

It’s a chore to play, not just because of the delay every time dialogue pops up keeping you from rapidly clicking through text you’ve already read. Its unpleasantness comes from game design choices:
You see, even in the most moon-logic laden Roberta Williams-designed Sierra game, the player has choices: Bereft of options that make sense, you can at least try to throw the custard pie at the man-eating yeti. You can at least try to empty the sack of peas on the ground in front of the weird blue creature chasing after you. You can at least try to drop the moldy cheese in the ancient machine.

In L.A. Law: The Computer Game, you can’t even successfully argue for your client. Oh, I suppose you could, if you’d discovered just the right dialogue trees and uncovered just the right piece of information. Otherwise, you’re strong-armed into making a terrible settlement for your client, even when you have MORE than ample evidence to create reasonable doubt in a jury’s mind at trial.

This is such a poorly designed game it boggles my mind how it was ever released. I suppose I should save a lot of this for the PISSED rating (and boy, will I be PISSED) and instead get to the case, for what it’s worth.

Nothing. It’s worth nothing. 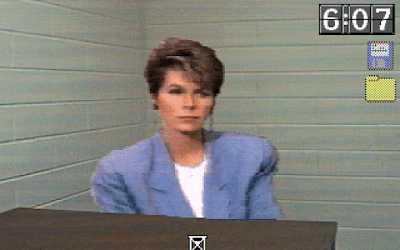 Rebecca Stevens, Victor’s client from Case #4, is accused of murdering her husband. As her legal adviser, I’d tell her it serves her right for reconciling with her secretive, verbally abusive, controlling, emotionally distant husband with the sketchy source of money and the drug-running, jihadist friends. But this game is so dumb so who cares? 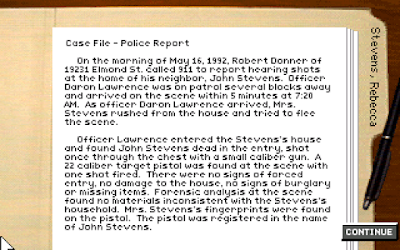 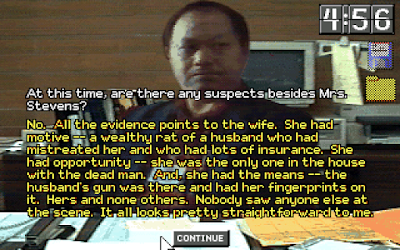 The D.A. is so confident Mrs. Stevens did it that she isn’t even in her office when I swing by. 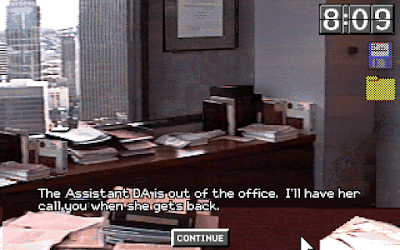 The pertinent facts are these: 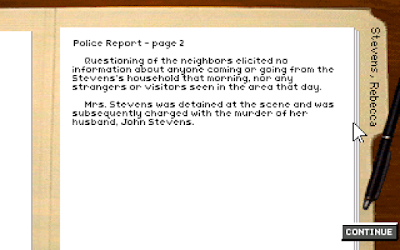 The authorities then impute motive onto Mrs. Stevens because her husband has a good insurance policy or whatever.

But the cops never lie, right?

Mrs. Stevens maintains her innocence. She claims she was also awaken by the gunshots, found her husband, picked up the gun in shock before dropping it, and then screamed. That was when the cops came in.

There also were no other prints on the gun, even though it belonged to John Stevens. When Victor confronts Detective Saleno about this fact, he’s not too bothered. 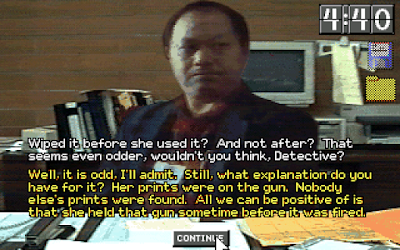 Time to make phone calls and/or go visit people! This is such a good video game!

Mrs. Stevens didn’t hear anything that night before the gunshot. She also tells Victor that: John had reverted to being a secretive, mean bastard; he continued to see his shady business associates, though none came to the house; and that they received several weird, prank phone calls that John always answered and which he claimed were “kids” just breathing into the receiver for three to five seconds.

Saleno, of course, doesn’t care about this.

Back at the office, I pick up Victor’s files from the previous case with Mrs. Stevens at the law library and proceed to make several phone calls.

First is the neighbor who called the police when the gunshots rang out at the Stevens house: Robert Donner.

It turns out Robert’s wife is the one who heard everything. She tells Victor that:
So we’ve got another potential witness, a vehicle that this game give me NO WAY of tracking, and confirmation that the police did a terrible job investigating this matter.

I call a Margaret Torrance who is listed in the directory. She puts me on the phone with her son. He didn’t see anything, but heard a gunshot and then Mrs. Stevens’s scream “a few minutes later.”

A few minutes later? It makes no logical sense for someone to shoot someone else, stand there like a dummy, and then scream. I know there’s shock and all that, but if this can’t cast reasonable doubt, I’ll eat my hat.

Also, the cops never talked to Michael. What is this, amateur hour? Isn’t the LAPD supposed to be one of the best-trained forces in this great land of ours, full of officers with nothing but the utmost integrity and—

Okay, I’ll stop making fun of California policemen before he who must not be named parks himself in my front door and makes me play awful games . . .

Anyway, this discussion of prank calls reminds me of Marcia Kelly, the firm’s contact at the telephone company. She traces the calls using her magic science voodoo and comes back with the information that the calls came from a place called Millhouse Investments. I call the number Marcia provided and get nothing.

Following up on the rest of my leads, I call the officer who arrived on the scene the night of John Stevens’s murder, but he’s not there. How convenient. Next, I call John Stevens’s accountant, Mr. Averel Harrision. Remember that slimeball? 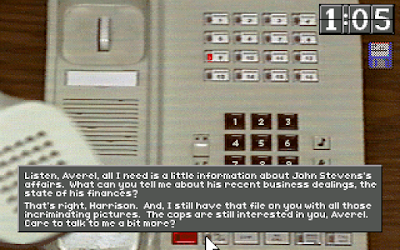 Apparently he remembers Victor. Like a dope, I pick the first dialogue option, and Harrison clams up and hangs up. I try calling again, but get no answer.

I debate reloading on the spot, but figure I’ll roll with this and see if I can still win the trial.

Heh heh. “Trial,” I say, as though I expect there to be one. More on this later.

I call Birelli next, another of Mr. Stevens’s shady associates, but again get no answer. I then call good old Joe Spanozi, who was unavailable earlier, and have him look into Millhouse Investments as well as the number Marcia found, but just as this is getting good, time runs out and I am called to the D.A.’s office to talk . . . 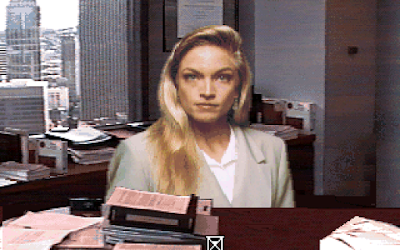 Trial? We don’t need no stinkin’ trial! Not in this case!

Here’s where the game strong-arms you into making an unnecessarily terrible decision. See, D.A. Zoe Clemmons boasts that it’s an open and shut case and there’s no way Victor will win. She offers 2nd degree instead (heat of the moment instead of premeditated). If she’s so confident she’d win at trial, why offer a settlement of a lesser offense? I know, I know, bluffing and all that. It’s part of the game. But there’s no way Victor’s gonna just give in, right? Right?

So Victor gives in. 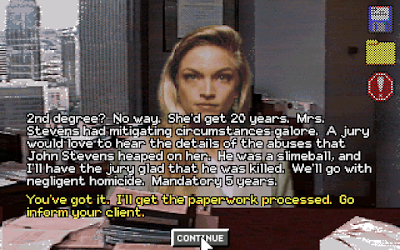 Well, kind of. The only option I get to pick is to counter with negligent homicide, which is basically saying that Mrs. Stevens didn’t intend to kill her husband, but through her negligence (i.e., acting stupidly or, in many jurisdictions, with “wanton recklessness) it happened. This carries a five-year sentence.

Zoe is very happy about this. Mrs. Stevens is not. 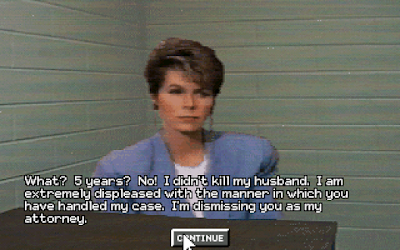 Neither is Leland McKenzie. 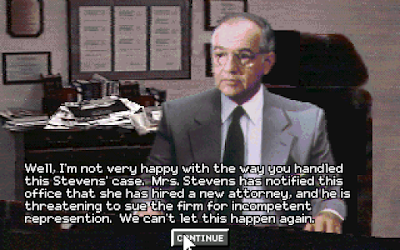 Screw you game. Screw. You.

I am not happy with this either. I reload and call Joe immediately after calling Marcia Kelly. And Joe delivers the goods.

I call Averel Harrison and choose the “Jerk” option. And it gets me RESULTS. There’s a life-lesson here somewhere. 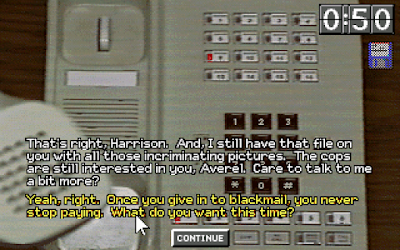 Victor is able to force Harrison to reveal some interesting information about the unsavory characters John Stevens was associated with:


Weird and weirder. I’d sure like to get more information about these people, but the time limit runs out and . . . 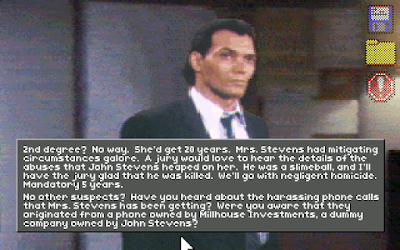 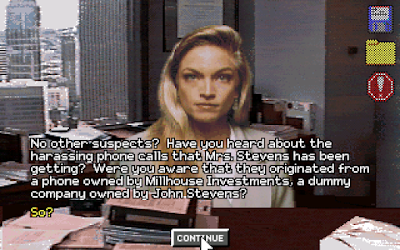 I can’t talk about the other people who might want John Stevens dead? Or the police’s sloppy detective work? Or Michael Torrance’s testimony that he heard Mrs. Stevens scream minutes after the gunshot? Or Saleno’s own admission that there are oddities in this case? Or the strange Porsche hanging out near the crime scene?

The end result is the same here: Rebecca Stevens is mad, Leland McKenzie is mad, and I’m mad.

Only one more case to go, I think. And then I can move on to something good . . .