Last time I had just made a train trip to seaside. This session I began by exploring the new area I had found. Moving west from the train station, I found a police station. I have no idea if it was meant to be just scenery, since there was nothing to interact with in it. Going east from the train station, I discovered a signal box containing pliers, which I could take.

When I finally went north from the station, I found a beach. I couldn’t cross the ocean simply by swimming, and since I already had found a manual for making boats, I had to obviously find equipment for this. I did discover in nearby sand dunes, southwest from the beach, a knotty log, which I might have used for boat, but I didn’t have any equipment for carving in. In the sand dunes, I also found a verminous wooden shack. The description of the shack mentioned a long plank, but I couldn’t take it, again, because I had no equipment for tearing it from the shack.

Returning to the beach, I now turned east, where the track went upwards, while the area turned from sandy to grassy. I found a post, which was part of a picket fence. I also discovered a mine entrance, but it was too dark in it for exploration.

West of beach I found an anchor - another part of a boat - and a cave with spider threads. When I tried to enter the cave, I was promptly killed by a spider, big as a horse. Examining the threads, I noticed that the strands were not sticky. I did have a pot of glue, made from glands of arthropods - a group of animals including spiders - so I tried offering the glue to the spider, who happily took what I gave it. I could now enter the cave. It was dark, but I now had enough time to go through it to a new area.

On the other side of the dark cave

Beyond the cave, I first found a volcanic area, where someone had forgotten a pan and a necklace. The latter was told to be valuable, so it’s probably a treasure. The former… well, if I find some eggs, I might have to do an omelette.

Next I came to hills, which were just another stupid maze, where directions didn’t make any sense. The maze was completely empty, if you don’t count the letter A, which was hanging in midair in one room and which could not be interacted with. I’ve already seen W, and it’s very predictable that all these letters make up some password.

After crossing the hills, I came to a valley with a river, which started from an uncrossable marsh and moved all the way to a waterfall. Trying to cross the river also took me to my death. I’ve already seen a plank, which I guess I shall have to use for crossing either river or marsh - or perhaps both.

Beyond the river valley, I found a hill and at the other side of it a small wood. I couldn’t explore the woods completely, because a giant logging machine prevented me from going past a point. I did see letter T (WAT? TAW? AWT?) and I found an axe. I instantly got an idea - I had that log to carve.

With the DIY boat manual and axe in my hands, I was able to turn the log into a boat. All I still had to do was to tie an anchor to the boat, and I was ready to brave the seas. 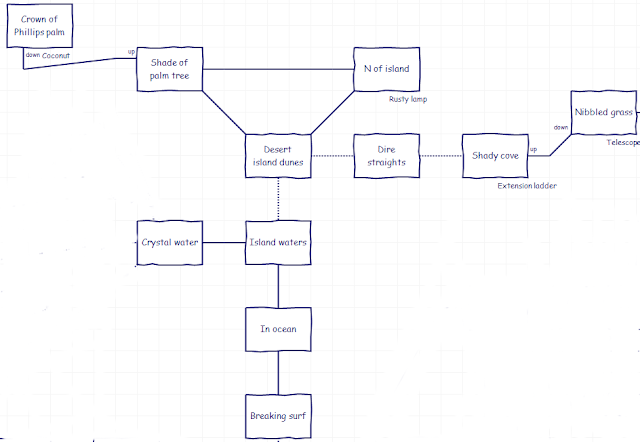 The map in the manual had showed a picture of a sunken ship north of the isle. Indeed, I could leave the boat at few places and dive. There were two problems. Firstly, my boat floated away, once I had left it. This was relatively simple dilemma to solve, since I could just use the anchor, when I wanted the boat to stop. The second problem was more difficult. It was dark underwater, so I could really do nothing there, until I had found light.

Off the coast of Emerald Isle I found a small island. Within the island, I found a palm with a golden coconut - another treasure - and a Victorian cycle lamp. The lamp did not work, and I had yet no idea how to make it shine.

From the small island, I could continue exploring ocean to west and to east, hitting the main land of Emerald Isle in both directions. This time, I went east. 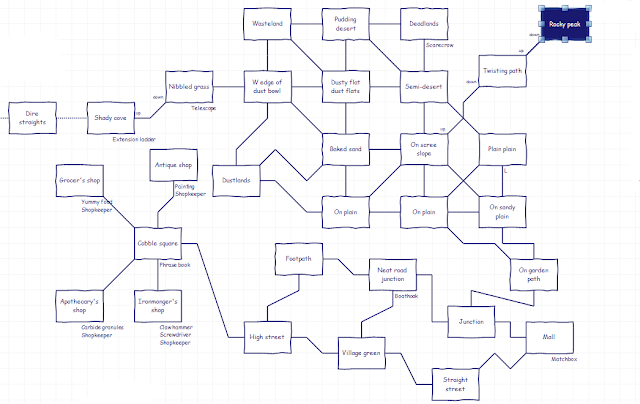 I arrived in a shady cove, where someone had left an extension ladder. I could, naturally, extend the ladder, which gave me an idea - maybe I could use the ladder horizontally, to get across either the marsh or the river. For now, I continued exploring and climbed up from the cove to the cliff, where I found a telescope, fixed to its place. By putting a coin into a telescope, I could view the western coast, where I saw a modern city with skyscrapers and a small airport. This seemed a bit surprising, since I thought no one, except the king, could leave Emerald Isle.

Beyond the cliff began a desert, which was mostly featureless, unless the attempts at comical room descriptions are ignored. The few interesting details I found were:

A small garden path led me to an urban settlement, which had a serious problem with littering - I found an unused matchbox on mall (not shopping mall, but a promenade), a boathook at a junction and a Foreign-to-English dictionary on town square. I haven’t mentioned it before, but I’ve occasionally come across signs written in some foreign language, so this is probably where I’ll need the dictionary.

Since I’m speaking of objects I found, I might as well point out that the inventory limit, familiar from earlier Level 9 games, is again quite bothersome. Especially as the game world is proving to be quite large, it has quickly become tiresome to carry items from one place to another.

And there was to be no stop for new items, since I found shops at town square. An antique shop sold a painting by Godfrey Dowson, grocer’s shop sold yummy food (not reject EEC butter, full-fat sausages or diet pills) and ironmonger’s shop had a selection of tools (claw hammer and a screwdriver).

Unfortunately none of these shops accepted my coins as payment. Luckily, the local apothecary sold carbide granules for a bronze coin. What’s carbide, you ask? Well, it just happens to be an important part of old bicycle lamps. Adding some water to calcium carbide (CaC2) creates acetylene gas, which burns with a bright flame. I just happened to have a bicycle lamp and adding the granules and some water from the ocean made it work.

Since I finally managed to achieve something beyond mere exploration, this seems like a good place to stop. I am glad I still have some leads to follow. I still have west of the ocean to explore and I will surely try whether I can use the extended ladder on the river or on the marsh. And of course, I now have a lamp to lighten up all those dark places.