Indiana Jones and the Fate of Atlantis - A Fistful of Scholars

Well, I've reached Atlantis on the TEAM and WITS path, so it's time to backtrack again and try to get here by hitting things with my FISTS.


As before, lets start by going to Monte Carlo – maybe if Trottier's being uncooperative he'll find out how hard I can punch.

This section is exactly the same as in the WITS path. I quickly find Trottier, pass his 'have you read the book' test and he gives me his business card. Not very fist-centric so far.

With Trottier's card in hand, I made my way to Algiers. The market area was as empty as it was in the WITS path, with the balloon closed for repairs and no knife thrower or food vendor. I walk straight to Omar Al-Jabbar's shop, and find his assistant, Paul Abdul. In the WITS path, getting a red fez and giving it to Paul was a puzzle I had to pass. This time, Paul is already wearing a red fez when I meet him.


I show Trottier's card to Paul and he agrees to pass my message on to Mr. Al-Jabbar. Knowing the puzzle from last time, I follow Paul out of the shop and follow him throughout the streets of Algiers until I see him ducking into a building.

I follow Paul into Omar's house, and find that Omar and Paul are being threatened by a Nazi.


As I walk towards the Nazi, the floor creaks and the Nazi turns around.


So now, as the path name says, it's time for my FISTS to do the talking.


As I wonder why the easily beaten Nazi's trap didn't include any backup Nazis, Omar thanks me for saving him.


Omar warns me to give up looking for Atlantis because there are men who will kill to stop me.

He also tells me that Kerner had forced him to give up the location of his discovery and are now digging in the location he had found. Omar offers his map and camel and he and Paul leave to warn the authorities.

Now that Omar's left me to ransack his place, I use the bamboo pole to take his map.

But before leaving I notice a few more items I didn't see here in the WITS path. I take a blackbird statue and a cheap soapstone statue, and I also notice a pot hanging by a thread that would have been above where the Nazi was standing when I entered.

Wanting all the IQ points I can fit in my greedy little pockets, I reload and instead of walking up to the Nazi, use my whip on the pot.


Using Omar's camel, I now go back to the desert to find the 'X'. This section is much like the WITS version, but instead of seeing enemy camels labelled 'trouble' I see Nazi trucks. If I'm caught by a truck, the Nazi tells me I have to go back to the city. I can let him take me back to the city and start the section again, but I'm playing the FISTS path here, so when in Rome... 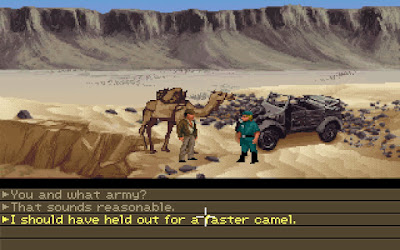 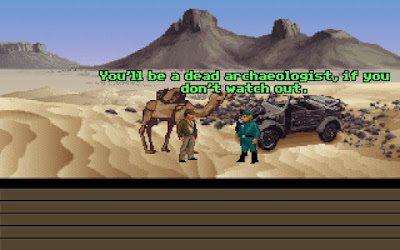 After a few more fights and a few visits to nomad camps for directions, I find myself at the abandoned Nazi dig site.


There is an exciting new obstacle this time. When I get closer to the dig site...


I get down into the dig site, and turn on the generator to light up the room (no puzzle this time.) I push the circle on the ark painting to open the secret passage. 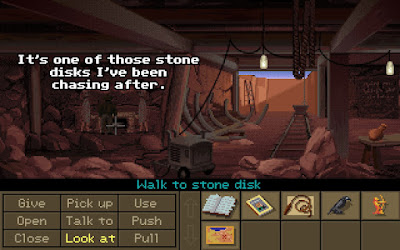 I also take the wooden peg and clay jar (which contains an orichalcum bead) and the all-powerful ship rib!

I shiprib the crumbling wall and put my new wooden peg and Sunstone on the mural, correctly aligning them according to the Lost Dialogue to open a secret door. The secret door, which rescued Sophia from the hole she fell down in the TEAM path, leads to the outside. As Indy climbs up the hole my first thought is, “if this hole is so easy to climb out of why couldn't Sophia do it?” but then I remembered that a table had gotten stuck in the hole in the TEAM path. Nice way to maintain consistency, game!


I talk to my new friend, affectionately named by the game as Gun-Toting Nazi. He doesn't give me any useful information and he doesn't want my fine leather jacket. Well, I'm doing the FISTS path, so let's get this over with Nazi! Prepare to meet my fists...


Okay, so I need to try something else. Poking him with my ship rib won't work so I use my whip.


Oh well, now that neither of us have a gun, it's time to get physical.

WITH WHAT? YOUR BARE HANDS?

CONGRATULATIONS! YOU HAVE JUST VANQUISHED A NAZI WITH YOUR BARE HANDS! (UNBELIEVABLE, ISN'T IT?)

It's probably worth mentioning that my health completely recovers after every fight, so I never have to fight someone with only a sliver of health left. It's probably a part of the Lucasarts philosophy of no dead-ends, because leaving Indy with a millimetre of health with fights still to come would be pretty close to a dead-end scenario.

Rolf doesn't have any loot (come on game, couldn't you give him at least one gold piece) so I check out the rope ladder.


I fly my balloon over the desert for a while, thinking perhaps I should go back to town and get to the airport, but Indy refuses, saying simply, "I don't want to go back to the city."

I try stopping off at a nomad camp to see if he has any advice. I notice one of my options is to ask him the way to Crete. I'm not a geography expert by any stretch, but I didn't think asking someone in the Algerian Desert the way to Crete would get any kind of useful response. 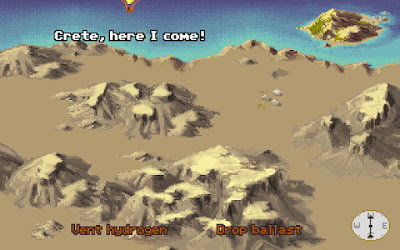 So how long would it take to travel from Algeria to Crete by balloon in 1939? I have no idea, but I can tell you how long it takes in 2018 by plane.


Session time: 45 minutes
Total time FISTS: 2 hours 40 minutes
IQ Points: 149 of 588
Total time combined: 9 hours 50 minutes
Nazis killed: 5 (Hörst in Omar's house, 3 in the desert, Rolf the Gun-Toting Nazi) – it says they're unconscious, but for the sake of this category I'm assuming they all die of exposure or something.

I've been promising/threatening to give my opinions of the game music for a few posts now. Rather than ramble on for too long, I'll try to compact my thoughts into a few bullet points.

So here's a few of my opinions so far:
But that's all just some quick opinions of someone who's not big on music in the first place. It was interesting to think about and I'll obviously be bringing it up again in the Final Rating.
Posted by TBD at 23:00