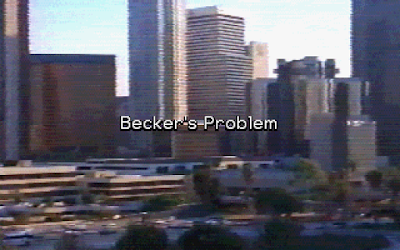 I did it, loyal TAG readers. I finished L.A. Law: The Computer Game. I hesitate to say “Won,” despite the title of this post (pre-established naming conventions, you know), because nobody wins when they play L.A. Law: The Computer Game. There is only a hollow sense of disappointment that, yes, I wasted close to six hours of my life playing this game. And you can too! I feel the need to share the pain, so I will wholeheartedly recommend that each and every one of you—yes, you in the back too!—go ahead and give this game a try. And then . . . then . . .

You know what? Nah. I’m perfectly content to be one of the, what, four people to ever play this game all the way through.


Pardon the lengthy preamble, but there’s so much I want to say about this game that really should wait until the “Final Rating” post. But there is one thing I want to point out, and it’s a theme I keep harping on in these write-ups, and that’s the game design. As commenter Kirinn remarked last post: “It's starting to sound like a choose your own adventure type game . . . Pick the correct arbitrary sequence of decisions to win!”

That’s exactly what it’s like. And it’s not fun. There is nary a puzzle to be solved here. But I’m getting ahead of myself.

One final point: You know the typical structure that these cases have taken? You know: get the facts, make some phone calls (okay, a lot of phone calls), go to trial, pray you picked the right choices? Well, all of that gets defenestrated here.

This case, even more than Case #4, makes me wonder it these in-game cases were based on actual episodes of the TV show. It also, frustratingly, is a giant waste of time. 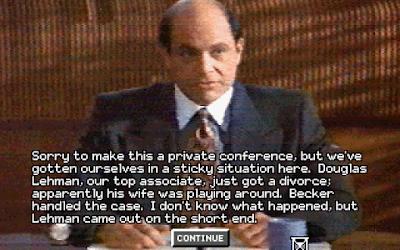 So this is certainly a unique one. One Douglas Lehman, a top associate at McKenzie Brackman and hitherto unknown to the player, is recently divorced. And he got shafted. Lehman’s attorney was none other than McKenzie Brackman’s own Arnold Becker. See, Becker represented Lehman against his wife, who was cheating on him. But dig this: Already ticked off at Brackman for screwing up the divorce proceedings, Lehman discovered that it was Brackman his wife Sarah was having an affair with!

Lehman is appealing, as he should, and is also calling for Becker’s head on a platter. McKenzie and Brackman are sympathetic to Lehman and really pissed at Becker. They task Victor with not only getting something for Lehman on appeal, but also with mending the rift between the two men, especially considering that Lehman wants to sue the firm for malpractice. 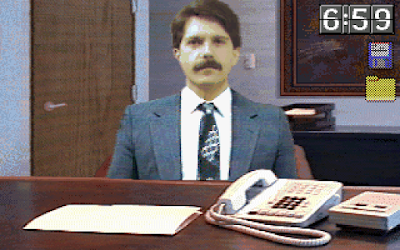 We’re immediately set up with an interview with Lehman. He gives us all sorts of information that, despite Becker’s insistence that he didn’t know Sarah was Lehman’s wife at the time and that he broke it off before representing Lehman, still makes it look really bad for ol’ Arnie.

I’d love to get into all of this information and trial prep for the appeal, I really would . . . but in the end it doesn’t even matter.

It’s such a strange design choice. I mean, I know why they did this: The game designers wanted to misdirect the player and make the game more like the show. But video games are not TV shows. Video games are supposed to give the player agency. This game, and this case in particular, consisted of a lot of clicking and reading: great if you’re making a visual novel, but not so great if you’re making an ostensible adventure game?

What do I mean? Here’s a rundown of how things go: 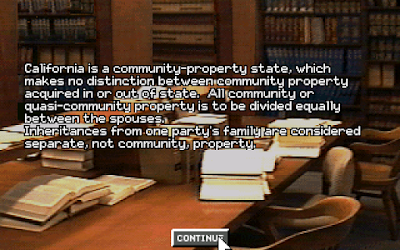 I have Joe Spanozi look up Lehman and his ex, but none of the information is really useful.

But wait! In the midst of the discussion, it is revealed that Becker was seen in Coronado with Sarah right after the trial, when they were supposedly, according to Becker, already long broken up. What the hell man?! 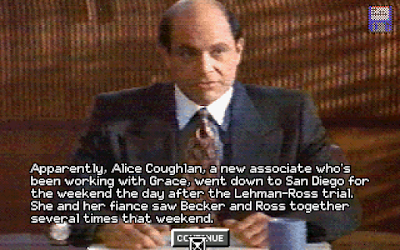 They were seen by someone named Alice Coughlan, another person I’ve never heard of prior until now. So this looks bad for Becker, who’s on a voluntary leave of absence now. He claimed he had no clue Sarah was Lehman’s wife, and that they stopped seeing each other before Sarah filed for divorce. This cases Becker’s whole story in doubt.

What’s worse is that Lehman is rallying some of the other associates against Leland McKenzie and Douglas Brackman, making noise about starting a new firm or otherwise reorganizing McKenzie Brackman, with Lehman getting 60 percent control of the firm. McKenzie disagreed, of course, but he’s shaken.

So apparently there’s a laundry list of mismanagement sins—lax oversight, racism, not enough pro bono, and so on—that Lehman is charging Leland McKenzie with. This is news to me. Was this all on the show? It sure feels like television stuff.

Anyway, the in-game timer goes away at this point as McKenzie and Brackman task Victor with seeing what the other attorneys thing (TL; DR they’re all useless except for my man Tom Mullaney—more below) and try to convince Lehman to change his mind. 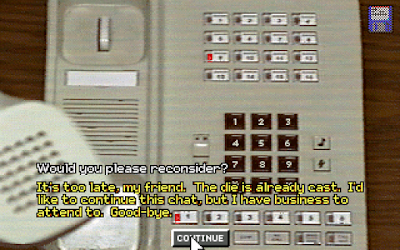 I call Becker at home. He denies absconding to Coronado with Sarah. In fact, Becker claims it was a spur-of-the-moment thing he did after the case, and had his secretary make the reservations. I call her at the extension Becker provides (which is weird; you’d think Victor would have a firm directory) and she corroborates the story.

Anyway, Becker claims Sarah was there and forcing herself in an unwanted manner on him.

So Alice Coughlan was the witness here. But Tom Mullaney thinks this is weird because, up until recently, Alice had been glued to Lehman, of all people. What the hell is going on here?

But here’s a twist: Becker’s secretary tells me that Coughlan had been stuck on Becker, and that she accidentally let slip to Coughlan where Becker was going. Hence she saw Becker and Sarah.

This is all so tawdry. But guess what? Even though I get Joe to investigate Coughlan (which turns up nothing useful), the partner’s meeting begins and I lose.

The end. Dump to DOS prompt.

The Trial (Kind Of)

Okay, there’s more to it than that. McKenzie and Brackman call the partners’ meeting, and Lehman basically puts on a trial whereby he gets Coughlan to talk about how her and her husband saw Becker and Sarah in Coronado, all intimate and whatnot. It sounds bad, and other than Mullaney asking one question, no one says or does anything. 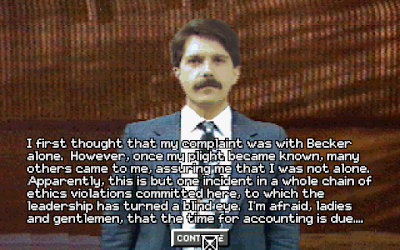 I’m not given the option to poke holes in Lehman’s case or defend the firm. And while I know this isn’t a trial, it is a partners’ meeting, where the partners will vote on whether they want to split up the firm.

Guess what: They do. The end. 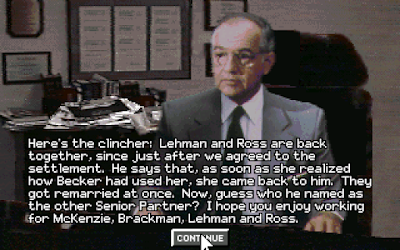 It’s all such a colossal blindside. Clearly, there was something I missed somewhere, some exact sequence of clicks and questions I should and shouldn’t have asked, some secret phone number I should have called. I suppose I could try the case multiple times, keeping a detailed chronicle of where each and every response gets me, but I value my limited time on this Earth too much to do that. So what’s a retro-gaming blogger to do but check the “readme” file? 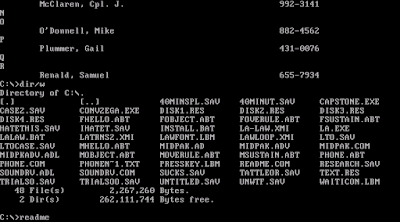 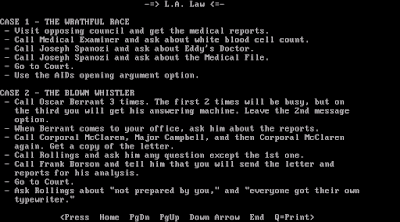 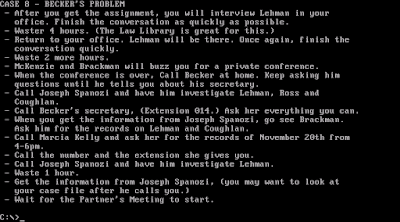 Literally, the only thing I didn’t do in this list was call Marcia Kelly. And for that, I lost.

But the profundity of this still stands: The game sucks so bad the developers give you the answers because they know it’s a frustrating, time-consuming mess of trial-and-error that is the very opposite of fun. Wow. 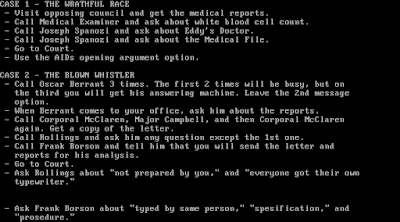 Also, the typos in this “readme” file are tremendous: “spesification.” “prosedure.” I’m dying. 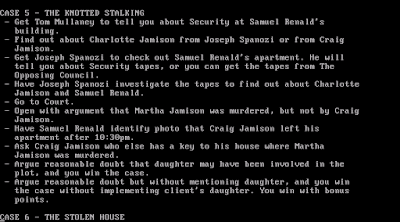 This is more entertaining than the actual game.
Session Time: 35 minutes
Total Play Time: 5 hours, 50 minutes
Record: 5-3 and the firm is finished as we know it
Posted by Ilmari Jauhiainen at 23:00