Last time I had just managed to find a lamp and make it shine with some carbide granules and water (amusingly, I had to be at the middle of ocean, before the game acknowledged there was any water around). My next task was clear.

I started exploration of dark places from ocean. Unfortunately, taking my carbide lamp underwater wasn’t a good choice, since my flame was extinguished.

My next choice was a cave, west of the beach resort. I had already managed to pass through the cave, but now I could see that it contained a valuable map, showing a palm tree beside a cross. Hadn’t I just seen a palm tree at the island next off the coast of Emerald Isle? All I had to find was a shovel to do some digging.

After finding the map, I went to a mine east of the beach. The mine quickly branched into two corridors, at the one end of which I found a shovel. The other corridor had a saggy and precarious ceiling, which collapsed, if I tried to go too far. I got an idea of using a fence post as a support, and it worked. At the end of this corridor I found a pick and a short rope.

Now, I didn’t notice it at once, but both the shovel and the pick could be used for digging - I guess you could use shovel for softer materials and pick for harder. Usually Level 9 games have indicated that some places are good for digging - for instance, they have softer ground - but I eventually just went through with all rooms carrying shovel and pick and trying to dig. I found plenty of things by digging in the areas already explored:

Before I got the idea of digging everywhere, I checked out if my theory of the use of extended ladder was correct. It indeed was and I could finally cross the river running across the land south of hill area west of beach. The first thing I found was a treasure chest, which couldn’t be opened, but was still valuable.

Following the southern side of the river, I came to a waterfall, where I could see limestone pinnacles beside a deep hole. The hole couldn’t apparently be accessed, but when I tried tying my rope to a pinnacle, I could use it to climb down the hole. At the end of a small cavern I discovered a valuable coronet.

The only thing left on my to-do-list was to explore the mainland of Emerald Isle west of small island. 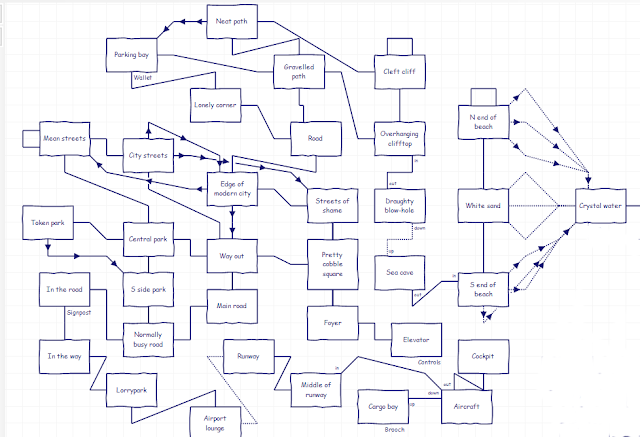 I arrived at a small beach, where I found a sea cave, leading through a draughty blow-hole to an overhanging cliff top. When I first arrived, I had no troubles getting through the hole, but when I later tried to do it, I kept losing my footing on slimy rocks. Checking my previous saves, I noticed that I had been wearing the leather-and-spikes -contraption - I suppose it wasn’t a piece of fetishistic clothing, but a serious climbing gear.

I quickly came across another urban settlement, more precisely, a parking lot. I saw even more evidence of the sloppy nature of the residents of the island - Mr. Jones, a prominent local dignitary had left his wallet unattended. Obviously, I was meant to search for Mr. Jones and return his wallet to him.

I made my way to the city proper. This is the third settlement I’ve found in Emerald Isle, and each one has had its own peculiarities. The first one - apparently the capital of Emerald Isle - was built on top of trees and had a Victorian clock tower and a palace. The second one, on an eastern end of the island, was the centre of commerce. The third one, on the western end of the island, appears to be the population centre of the island, with nearly every room having traffic jam. They even have their own skyscraper.

I could enter the skyscraper, and within I found an elevator. Unfortunately, I couldn’t make it work, since the controls were hidden by a panel closed by tight screws. I do know a shop where I could buy a screwdriver, but I don’t have the money for it. 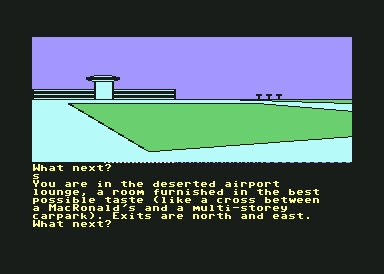 Beyond the busy metropolis, I discovered an airport. Apparently, I could just walk to the runway and enter a cockpit of a plane. Well, I checked the official clue sheet after this, just to see whether I had missed anything and noticed I had again solved a puzzle without noticing it - if I wouldn’t have worn overalls, I wouldn’t have been allowed on runway. Emerald Isle really has the worst airport security, if that costume fools them. 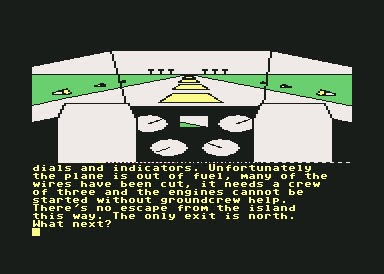 The airplane could not be used for flying, but I did find a valuable brooch in the cargo bay.

And that’s as far as I’ve got! Unlike last time, I have no obvious things to try or places to explore. I do have a set of problems to solve:
I hope I’ll discover solutions to some of these puzzles myself, but if not, I’ll have to start using the official clue sheet to get forward.