Indiana Jones Journal Entry 4: I spent most of the day killing Nazis and pushing stones. I even broke my ship rib by using it to push a stone. But I'll mourn later. Now, I have to rescue Sophia and/or explore Atlantis!

When we left off last time, I'd taken a barely-feasible balloon trip to Crete.

To the left of where I landed are the ruins of Knossos in Crete, where I had to do some of the same things I did during my TEAM playthrough. 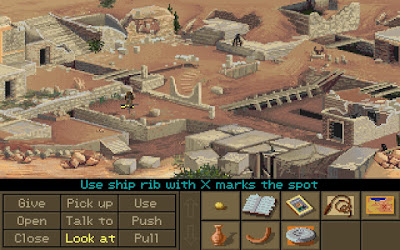 But this time, before I can enter the labyrinth, a Nazi comes through the secret door and wants a chat.


Because I want to hear what else he says, I reload and ask him other things – I find out that the Nazis have kidnapped or coerced Sophia and she's helping them find their way to Atlantis.

Walking over Klaus' dead (unconscious) body, I enter the labyrinth and, once again, repeat things I've done in other paths:

But after all that I was stuck for a while. I actually started mapping the labyrinth to ensure I hadn't missed a room. Amongst my repeated travels, I tried something I'm sure I'd tried before. There was a heavy stone slab blocking a doorway. I tried pushing it.


I push the slab again and get a similar clue “Did it move a little bit...” A few more pushes, and...


I checked my old screenshots to make sure I hadn't missed something earlier. So what happens the first time I try to move the slab... 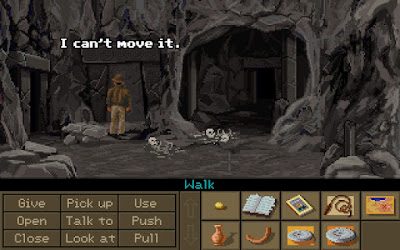 Anyway, beyond the heavy door slab that I had to push FOUR TIMES before it fell, I find a chasm with a convenient outcropping above it.


Further along is a section of the labyrinth I hadn't seen in the other paths: the Nazi section.

When I enter from the right I can see two Nazis having a chat at the other end of a long corridor. If I walk past the corridor, I'm noticed and one of the Nazis comes to investigate.


I had noticed two large rock slabs before being interrupted by the Nazi, so I went back into the room and got the Nazi's attention before hiding behind one of the slabs. Then, when the Nazi came to investigate, I do what I've just been trained to do. PUSH SLAB.


Before continuing, I reload and try to fight Hans in order to get more IQ Points. 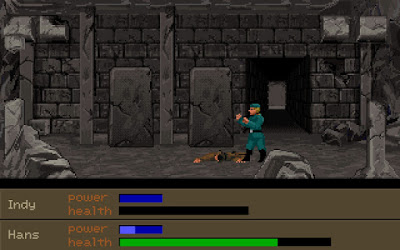 I try to fight him again a few times but fail, so I give up, go back to my PUSH SLAB save, and continue on through the corridor. There, I pick a fight with Hans' friend, Franz. 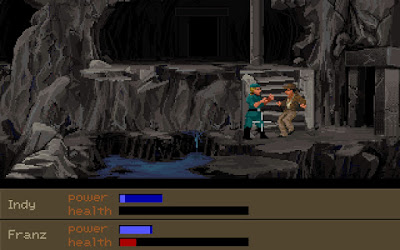 Eventually I kill Franz, then further along kill Otto, Karl and Kurt with my FISTS.


Past Anton, I find a singing Nazi, a sloped floor and a boulder.


Ignoring the boulder for now, I go ahead and meet the singer, a Nazi named Arnold. He'll let me leave if I give him the name of a song he knows, or I can fight him. 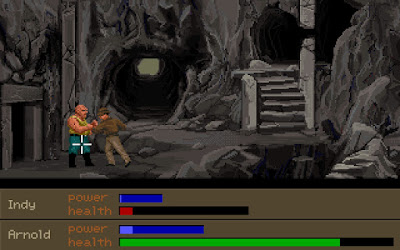 Arnold has way too much health for my fighting tactic, which consists of randomly clicking my mouse on either the Nazi's head or body. I could probably fight better if I learned to block, but who needs tactics when I can roll giant rocks instead.

Speaking of which, I go back to the boulder, and when I try to push it I'm told it's too heavy (I've heard that one before, game - why should I trust you this time?) and I need some leverage.

Do I have anything for leverage – of course, the multi-talented ship rib. 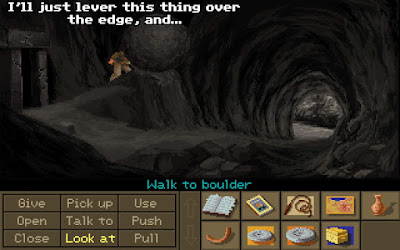 As there are two entrances/exits to Arnold's area, I can get back there and take the other exit to get back to the rest of the labyrinth, but I can't do it without being interrupted by Arnold. I (after a reload or two) give Arnold another song he's happy to sing and leave back to outside Arnold's room.

I see the other side of the boulder blocking the entrance and I suspect that if I can push the boulder it should roll down to where Arnold was.


This time, the game's serious about it being too heavy to push, so I go back. I have no ship rib anymore, but I have an idea on what I can use to replace it...

The stalactite breaks, but the boulder is loose. I get a mini-cutscene of the boulder rolling down, followed by the sounds of “yodel-odle-URRRK!” from the next room. I go to investigate.


Indy searches Arnold's body, and gets some orichalcum beads and our old friend, the amber fish-on-a-string that I'd used in the TEAM path as an orichalcum detector.

Squeezing past Arnold's boulder, I find the Atlantean map room, but can't open any of the doors, and my stones won't do anything without the Worldstone.


I use the fish/orichalcum detector in the map room, but it doesn't detect anything. I then systematically go room to room using my fish-on-a-string everywhere. Eventually, in one of the rooms containing a dead Nazi, the fish points downwards next to a waterfall. I then noticed I can TALK to the waterfall. 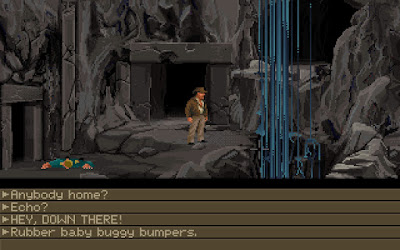 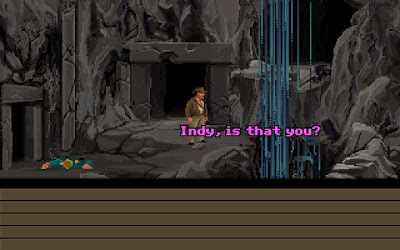 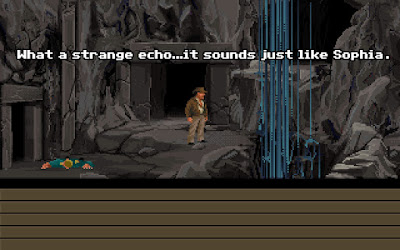 I use my whip with the pit, and Sophia climbs up. 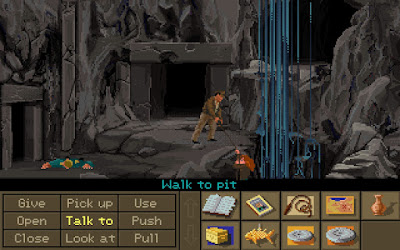 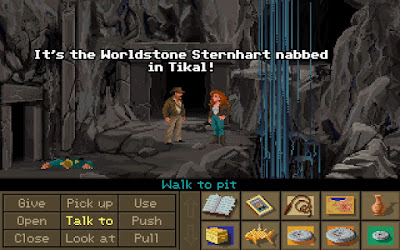 Sophia had very conveniently found the Worldstone in the pit Kerner had left her in. Now that I have all three stones, we go back to the map room and I correctly align the stones, opening a door to the outside, sort of. Sophia translates an inscription on a stone arrow.


As the nearest island to the north is Thera, Indy and Sophia decide to go there. Are they forgetting that all Atlantis legends say that the city is under the sea? Why do they think going to a landmass is in any way helpful? 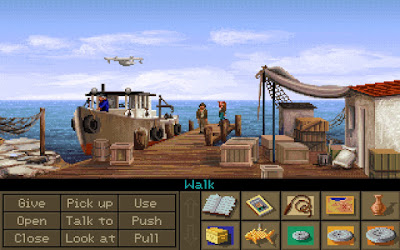 After arriving at Thera, Indy and Sophia have a discussion about what to do next. I start by talking to the fisherman. And I start talking to him by insulting his boat. He demands I apologize to 'Bessie the Boat' 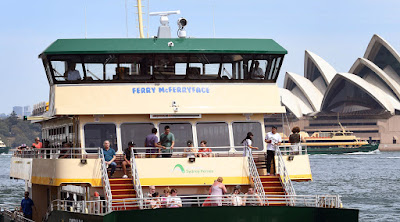 After trying and not advancing with all other dialogue options, I eventually give up and apologize to Bessie. The now-agreeable captain asks me where I want to go.


I have to tell him the direction and distance I want to go. I have no idea so I just give him random answers. The conversation gives me a few chances to back out, so I'm confident my guesses are wrong, but as I know I'm playing a 'no dead-ends' game, I want to see what happens if he takes me to the wrong location.

He takes me to my randomly guessed coordinates, and I play around with the items on his boat. I attach an air compressor hose to a diving suit, but the suit has a hole in it. There's not much else to do here, so I give up. 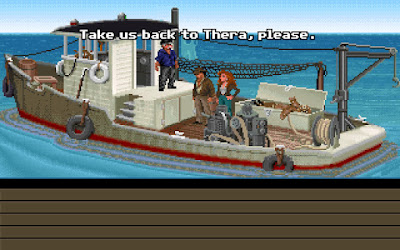 Back at Thera, I go to the mountains. After an amusing little interaction, Sophia decided to stay at the dock while Indy explores. Next to a Nazi truck in the mountain location I'd been to in the WITS path, I find an item that will obviously help with the punctured diving suit. 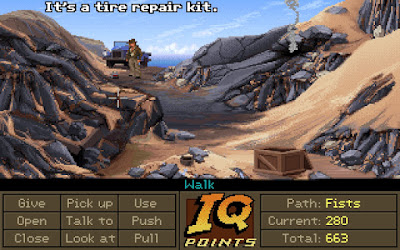 There's nothing else to do here. I close the open wooden box but the balloon bladder invoice that was there during the WITS path isn't there. And the entrance to the dig site was collapsed.


Before telling the boat captain where to go, I re-read the Lost Dialogue of Plato for clues.


I ask the captain to take us 18 miles southeast of Thera. He takes us there, I use the tire repair kit on the diving suit, turn on the compressor, and use the suit. 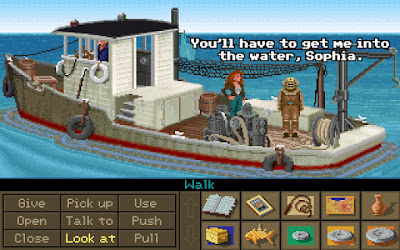 Then I'm given control of Sophia. I get her to use the hook/hoist with the diving suit and drop Indy into the ocean.

One thing I haven't mentioned about the interface is the text colours. Whenever Indy's talking, the text is white. When it's Sophia the text is purple. Other characters have other colours (the ship captain is green.) I'm not sure how many games have a similar feature, but this would be very useful if I didn't have voices on and was relying on subtitles.


When I'm only halfway lowered to the seabed, I notice I've stopped descending. I also notice that the shadow of our little boat has a new friend.


Back up on the boat, Sophia's been reunited with her favourite kidnapper, Kerner.


Kerner disconnects my hose, and I drop down to the seabed. As I fall, I see the shadows of the two ships move away as well. So I know I won't be leaving via boat.


There are a lot of cave entrances here – each one a potential Atlantis. And there are a number of other screens full of caves if I go left or right. With luck, the first cave I entered turned out to be the right one. But who wants to be right. I reload and try the other caves in case I find something interesting, and also to see what happens if it takes me more than three minutes to find the right entrance. 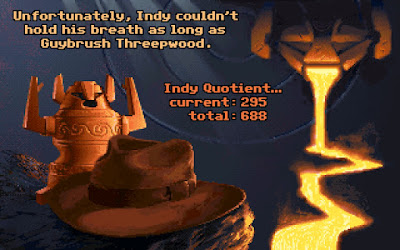 Fine, but back to this game, let's restore to when I chose the correct cave entrance.


So next time we'll finally explore Atlantis as our paths have converged, and in the meantime I might try to do all the alternate puzzle solutions I've missed along the way!