The leading men behind Level 9, the Austin brothers, were certainly kind for novice game designers. We’ve already seen them program and publish one game designed by their fan - Lords of Time, by Sue Gazzard - and they did it again with Emerald Isle. The person behind the game was  eighteen-years-old Shaun Abbott, and Emerald Isle was the only game he managed to ever get published. An interview in a recent issue of Retrogamer  (173) mentions that Mr. Abbot did try to sell another game for Level 9, but they declined to take the new product into consideration. The simple reason might have been that the Austin brothers weren’t really impressed about the plot of the first game and had even changed the latter half of it.

The game box provides some plot details. Apparently I am meant to be an aircraft pilot flying through Bermuda Triangle. When my plane is destroyed in a storm, I manage to parachute to a remote atoll known as Emerald Isle. Rumors have told me that no one can leave the island, except its ruler, and becoming a ruler requires beating a test. Considering that the manual says that score will be gained by collecting treasures, I am pretty sure what this test involves.

An interesting detail at the back of the game box is that The Price of Magick and Red Moon are advertised as sequels to this game. If you look at the Quick Guide of Level 9 I’ve again provided at the end of this introduction, you’ll notice that these games were later bunched into a trilogy with Lords of Time. Could this be another sign of the distaste Austin brothers had for this game? Oh well, now that I’ve psyched myself into believing only bad things about Emerald Isle, it’s best to finally start the game.

I began the game by hanging from a tree, with my parachute wrapped around a branch. Vultures and wild beasts gathered around, and if I waited too long, I was unceremoniously killed. With some experimentation I finally noticed I could release the parachute and drop down from the tree. I could also climb back up and retrieve the parachute, which was made of finest silk.

I wasn’t yet on the ground, as I discovered when I tried to drop my parachute - it fell down through branches to a swamp below. My attempt had been to do some basic mapping by marking the location I was in with my only inventory item so far, but this opportunity wasn’t now available. Fortunately, the game’s graphics system was of some assistance. You see, whenever entering a different screen, the game meticulously draws the picture - I assume this was a fairly common method to save precious disk space by putting only the instructions for drawing pictures and not pictures themselves on the disk. This tends to make the game play slower, but it also helps in mapping, because I can now instantly see, if moving to some direction just loops me back to the same room - the game draws no new picture.

With a little exploration, I quickly find out that in the first forest screen, for the first three moves, whichever cardinal direction I took, I always looped to the same screen, and only with the fourth move I would actually go to a new forest screen. All in all, the forest wasn’t that big. The second screen contained a small silver coin, and then I was already at the gates of a city.


A thorough exploration of the city revealed some things: 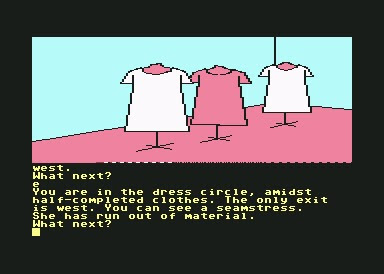 The final thing I found in the palace were steps leading down through a tree to a railway station. Interestingly, I had to walk through a dark square when going down the stairs. Fortunately, the grues… I mean ghouls wouldn’t attack me for the first few turns in a dark zone, so I had just enough time to get out.


The railway station contained another locked gate and a ticket machine. With copper coin I could have a single ticket, with bronze coin a return ticket and with silver or gold coin a season ticket. I was pretty sure I’d need to use the train multiple times, so I used the silver coin. After that I just waited for the train to arrive and traveled to a seaside station. Judging by the map in the manual, I am pretty sure there’s yet another station I could find - maybe trains going there use a platform behind the locked gate? In any case, this is a good case to take a break. Remember to guess the score!

Games already played on The Adventure Gamer:
Games still to be played:

Jewels of Darkness (1986): Colossal Adventure, Adventure Quest and Dungeon Adventure (all the Tolkien references have been removed)
Silicon Dreams (1986): Snowball, Return to Eden and The Worm in Paradise
Time and Magik (1988): Lords of Time, Red Moon and The Price of Magik
Posted by Ilmari Jauhiainen at 23:00