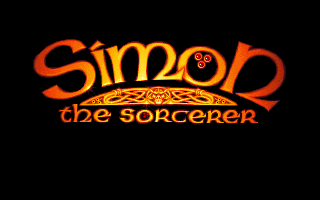 Things were simpler in 1993. LucasArts was still churning out amazing adventure games and no-one saw the death of the genre coming. Granted, FMV games and Myst were slowly chipping away at the genre's reputation but the core of the point & click experience was largely intact. Now some games used a simplified interface while others still followed the model that had been established with the SCUMM engine in 1987 – an interface that could be understood as a graphical representation of the parser that had fueled so many text adventures. Simon the Sorcerer was one of the many games that copied the LucasArts formula using a very similar verb list but games like this would soon feel like roadblocks on the way to the casual adventure game of the mid-1990’s. However, in 1993 this was all fair game.

Another common wisdom that remained true from the mid-1990’s until 2002 was that there were two Simon the Sorcerer games (and two only) and people would tell you “eh...they’re good”. Some people loved them, some people didn’t quite feel they were the bee’s knees but on the whole they were regarded as quality point & click adventure games. Then the series shared the fate of so many others and got some rather unfortunate late sequels. The less said about them the better.

One of the most interesting tidbits about Simon the Sorcerer – albeit with relatively little effect on the actual gameplay experience, I reckon – is that it unites two of the most important early adventure game brands: Adventure Soft and Infocom. Infocom? That’s right, Activision used the brand of the now-defunct company they’d bought and (at least helped to) run into the ground to market this British game in the United States. And Adventure Soft? Well, that’s a hell of a story. 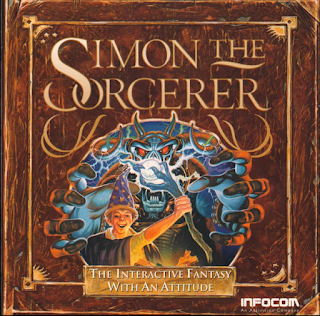 This is actually the same company that was founded by Mike Woodroffe in Sutton Coldfield (very close to Birmingham) in 1983 in order to resell software from US companies – most notably the Scott Adams adventures – to the British market. Later they began to release their own games as well and when the original Adventure International US went bankrupt in 1986 Woodroffe’s company branched out into new directions, notably some Fighting Fantasy video games. When they began to set their sights on the new 16-bit platforms the company was reinvented under the more adult moniker of Horror Soft, giving us Personal Nightmare, Elvira I & II as well as Waxworks. They finally recovered from this by working on Simon the Sorcerer and rebranded themselves yet again as Adventure Soft in order to release their new ‘British LucasArts’ games, releasing Simon the Sorcerer I & II as well as The Feeble Files which is quite dear to my heart – hopefully I will have the opportunity to cover it for this blog as well some day. (That said, someone should really play Personal Nightmare for this blog but knowing the game it definitely won’t be me, sorry.)

Simon the Sorcerer itself was released either on January 2, 1993 or September 27, 1993 (sources vary) although the latter date seems more probable. It is sometimes remembered as one of the earliest “full talkie” adventure games but actually the CD version including the “full talkie” version was not released until 1995 (at least not for IBM PC compatibles). I will play the floppy disk version accordingly and give the CD version a quick playthrough afterwards in order to be able to compare the two. Apart from its MS-DOS release in 1993, the game was released for the Amiga as well as (a bit later as I see it) for the ill-fated Amiga CD32. It was also ported to a mostly forgotten OS called RISC OS (maybe you’ve seen the recognisable “cogwheel” logo at some point) that was only available for Acorn computers and thus remained a very exclusively British phenomenon. In 2009 and 2013 respectively it was ported to iOS and Android. Finally, 2018 saw the release of the “25th Anniversary Edition” of the game which you can still buy over at GOG.com. Most of the reviews were quite negative but the download includes the “Legacy Edition” which is nothing more than a fancy name for the “full talkie” CD version. I purchased the GOG download because the floppy disk version doesn’t seem to be for sale anywhere unless I’d want to buy the actual floppy disks which would cause a number of other problems. That seems good enough for me (and my karma). If you want to play along you’ll have to do the same thing. And if anyone was masochistic enough to play the 25th Anniversary Edition I’d fork out some extra CAPs in addition to the usual reward for playing along.

But back to Simon the Sorcerer itself. The game was another family affair which wasn’t exactly unheard of in Mike Woodroffe’s company. Founder Mike Woodroffe himself took his son Simon onboard for this game, effectively making him the lead designer while his wife – and Simon’s mother – Patricia joined the team as assistant producer. Both Simon and Patricia had already worked with Mike on the Elvira games as well as Waxworks. Mike and Simon had first worked together on U.S. Gold’s AD&D: Heroes of the Lance in 1988. Simon was responsible for parts of the level design and did some testing there. It was the first game he ever worked on. Simon the Sorcerer on the other hand was the first game for which he assumed a leading role.

Moving on, it was quite difficult to find the original DOS manual for the game. As long as I’m playing the 1993 version it is obligatory, though, as this version (and this version only as far as I know) has copy protection. The manual is fascinating in its own right, too. Take these short bios of Alan Bridgman, Mike & Simon Woodroffe, for example: 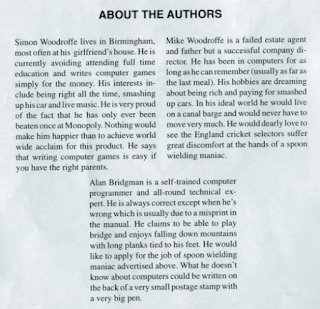 Also, the system requirements will prompt the younger readers among you to shake their heads in disbelief while the others will feel a tickling sensation in their nostalgic bone:

640K RAM!! Can you believe this decadence? 10 MB of hard disk space!! I might have to delete Word 6.0 for this! 12 MHz or faster… faster?? THIS IS MADNESS!! All joking aside, the manual is setting the tone of the game quite nicely, mostly sticking to outright silliness throughout.

The introduction, or “foreplay” as it is called here, seemed familiar to me. I might have read it way back when. Here it comes:

Once upon a time It all started on the day of Simon’s 12th birthday. He was having a party, not a modern rave party that 12 year-olds have these days, but a quiet English affair with jelly and ice-cream, pin-the-tail on grandma and a magician called Marvelo. He specialised in pulling rabbits out of hats and making seemingly endless quantities of brightly coloured handkerchiefs appear from his mouth.

Simon took great pleasure in pointing out how these tricks were done to his awestruck friends and eventually had to be physically restrained by his father to prevent Marvelo the Magician becoming Marvelo the Murderer.

When blowing-out-the-candles’ time came, Simon wished for a Gameboy from his grandparents and for his older brother to fall down something deep and preferably spiky. He was surprised when later the doorbell rang and, upon opening the door, he discovered a small, scruffy looking dog wrapped up in shiny paper. After unsuccessfully trying to install his friend’s Tetris cart, he was persuaded that it was [] not a new Gameboy after all.

The dog (he called it Chippy) had a strange book in its mouth that no-one could read. His parents hadn’t the heart to tell the young boy the dog wasn’t for him and that they had no idea from where or whom it came. It was, after all, a new target for the boyish sadism found in all youngsters. The family adopted the dog and the book was dumped in the loft and forgotten…

Ominous, innit? The remainder of the manual is a bit hit-or-miss to be honest but you have to admit that it made absolutely sure you knew what kind of game you just bought in case there was even the tiniest shadow of a doubt. Let’s look at the description of the installation process: 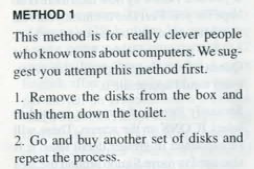 What did that cab driver say when Elvis Costello asked him to take him to Chelsea? Right: “Ha bloody ha.” More informatively, this is the list of available verbs: walk to, talk to, give, move, look at, use, wear, remove, consume, pick up, open, close. Quite basic which might be a good thing. Also, there’s a map feature that I don’t really remember: “By selecting USE Map it is possible to jump straight to [locations once they have been discovered].” I feel like I may have played the game without this feature in the Nineties because there are exactly two things I remember about it: the main theme of the soundtrack gets still stuck in my head whenever I read the name of the game and there was a LOT of walking/backtracking involved. Boy, was there ever. Or maybe I was just unaware of the map feature. We’ll soon find out.

The manual ends with an appendix of fake letters effectively doubling the troubleshooting section just opposite. “Dear Aunt Agatha”, one of them says, “My copy of STS won’t start. Yours haltingly, D. Ed Stopp.” I think you get the picture. Expect the first gameplay post soon if I don’t get lost at one of those modern rave parties. And don’t forget to guess the score!

Email ThisBlogThis!Share to TwitterShare to FacebookShare to Pinterest
Labels: 1993, Introduction, Simon the Sorcerer, Will Moczarski