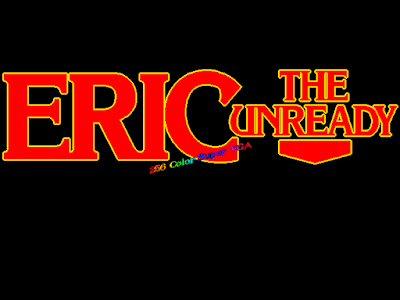 I am in a difficult position of having officially played only the last few scenes of the game, while the majority of posts have been written by the Brown Dragon. Although it will be difficult to integrate my playing experience with what TBD thought about it, I’ll try to take his statements into account at least in some measure. Let’s begin!
Puzzles and Solvability

There’s no question about it, Eric the Unready is a very easy game compared to Legend standards. True, there are some more complex puzzles in the middle part of the game, one of which even led to a Request for Assistance, but definitely no brain melders in the style of Spellcasting or Gateway games. This is a clear design choice, evident also in the impossibility of ever losing important items and the ensuing lack of dead ends. While there is a lot to commend in this principle, there’s perhaps a bit too much hand-holding throughout the game.I’d also point out that the use of rare verbs as a solution to some of the puzzles was a double-edged sword. If you are playing with the mouse interface, like I did, it is blatantly obvious that you are probably meant to use that strange verb that just appeared in your word list. If you are playing it traditionally, you might never guess that hooting is a possibility.

It’s the trusty Legend interface again, with all the same merits and faults as it always used to have. Due to their new policy of making their games fun and easy, the producers have removed all inventory limits, which is a clear improvement from the earlier Legend games. Still, this is just a minor addition, and as a whole, the age of the interface is starting to show.

It’s a great story! Rarely has an adventure game told such a down-to-earth narrative of a sympathetic and less-than-average joe getting into more and more embarrassing situations. I am, of course, talking about the first chapter, with the wonderful tale of catching and kissing a pig. The rest of the plot… princess, curse, evil witch, five magical objects, you get the drift. It’s run of the mill fairy tale stuff that provides some filler cutscenes and the barest of motivations for Eric’s adventures around Torus.Speaking about Torus, you can take the setting as seriously as the name itself implies. The game world is an even less coherent mishmash of trope parodies than Discworld. There’s nothing believable in any of the places Eric travels to, but this just is part of the magic of the game. With the exception of the final chapter of the game, which serves more to give a closure to the plot than any fun ending, the individual sections have a sense of whimsy reminiscent of Monty Python and Douglas Adams. True, I might not have gotten half of the jokes based on pop culture references, but enough of them landed to make me cheerful.

This category has never been Legend’s forté. At least soundwise, Eric the Unready makes no exception, since music and sound effects are bland and forgettable. Graphics do show improvement and there is a rich variety of location images. Yet, it’s obvious that there is only a very limited set of more high quality images used in cutscenes. This is especially evident from the constant reuse of few essential screenshots throughout the game. The reuse of game characters is especially noteworthy, since it makes some of the poses look stiff and unnatural, when taken out of their natural context.Score: 5.

I’ve already mentioned how fun game to play Eric the Unready is. True, lot of the humor is based on pop culture references, some of which are quite incomprehensible to anyone like me, who did not live in USA at the time - what was that beer commercial, again? Still, even if individual jokes would fall flat, the whole formed out of them is enough of a bizarre experience. An important element holding all the disparate jokes together is the character of Eric - the lovable bumbling fool, who you know will have made a mess out of his latest achievements by the end of the day.

An important part of the charm of this game is the prose. There’s nothing very deep going on, but giggles abound behind every corner. Same goes for characters. I won’t be having a discussion on the philosophical beliefs of a rock salesman, but he will give me some hilarious sales pitches. All in all, a very professional and full experience.Score: 7. 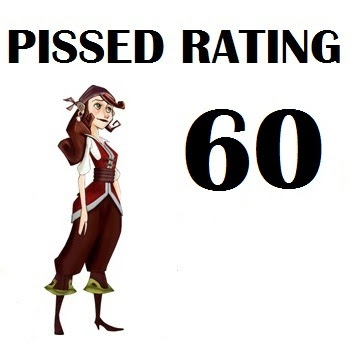 It's only a few points under what Gateway scored and so makes this the second best Legend game. Both ShaddamIVth and gboukensha guessed exactly that, so they will receive some CAPs. And speaking of CAPs, let's go to...