Eric the Unready - To Baldly Go Where All Hair Has Gone Before!

By IlmariTime for some spring cleaning! I’ve agreed to finish Eric the Unready, which TBD set out to play a while ago. Fortunately, the end is already near, as we are facing a group of rather familiar swamp rafters. The atmosphere is full of jokes, some more good than the others. Captain Smirk speaking to a real log made me smirk and so did a skeleton called Bones, while Doctor Spock’s lines with paediatric twists sparked even a few snortles. Dressing Scotty in a kilt and making the helmsman a literal Zulu… not so much, and when I understood the rowing Native Americans were meant to be the engines, I wondered why I had to be punished so hard.

I boarded the raft, which took off to the swamp, but quickly got lost in the fog. The helmsman could clearly use some roddenberries that improve sense of direction. This joke welt flat, since, to be frank, Star Trek franchise was often better without Roddenberry’s sense of direction. 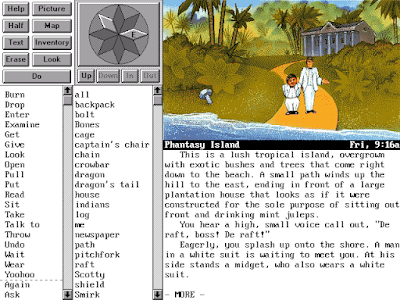 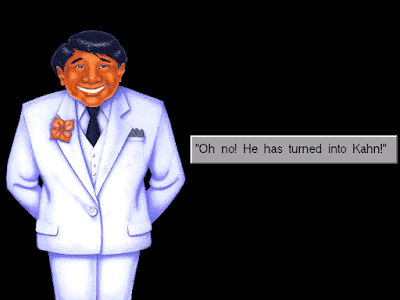 Ah, Hervé Villechaize! Finding his spot in the limelight by getting stuffed to a suitcase, establishing his fame beside Ricardo Montalbán, getting parodied by none other than Speedy Gonzales and delivering his catchphrase in a donut commercial, before committing a suicide after a life of chronic pain caused by his internal organs not fitting his frame. How appropriate that Hervé was recently played by an actor of no less stature than Peter Dinklage. 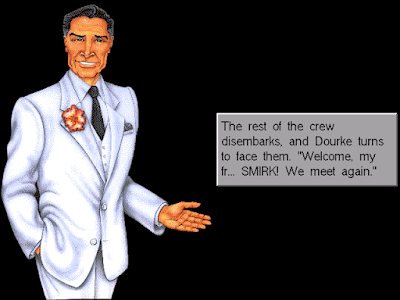 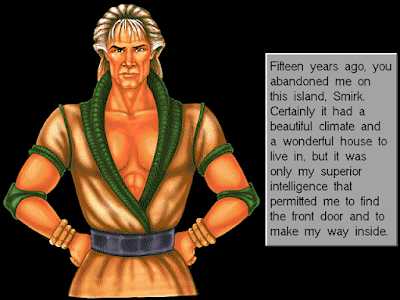 And Montalbán himself in two of his most famous roles! This meeting might have entertained me more, since we all know that ex-Star Trek villains end up in Fantasy Island, but I saw it happen already in the psychedelic section of Star Trek: Lost Episode. 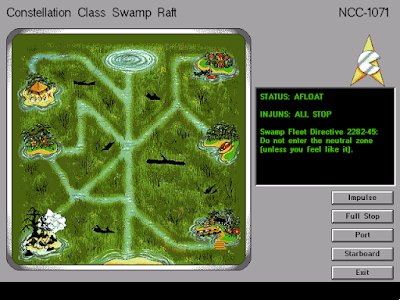 Smirk and his crew were captured, and I was asked to make a coconut drink that would transform the patron of the island back to his nicer self again. Boarding the raft again, I found myself with the map above, where I could move through the swamp to various islands. After a while, moving from one island to another became just a tiresome routine. I zigzagged the swamp a few times in my real gameplay, but there’s a clear optimal order, in which the different islands should be visited, so I’ll simplify the matters by going through them in that order. 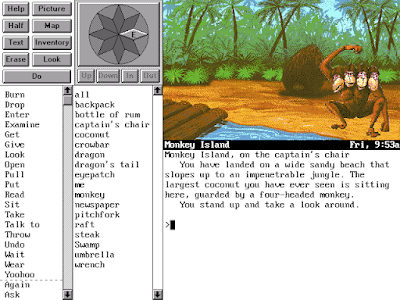 Is this supposed to be based on the famous series of games? If so, it’s sadly lacking in content: there’s the four-headed monkey guarding a giant coconut and nothing else. This is clearly a place where to use the magic banana Eric received way back at the beginning of the game to distract the monkey, while is procure the coconut. 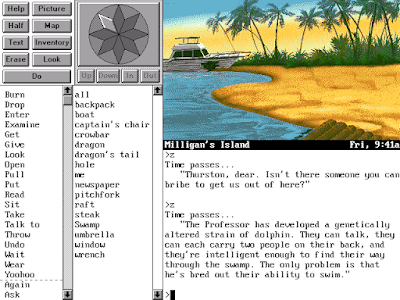 I’ve never actually seen any episode of the series this is based on - unless you count the Alf crossover - so I don’t know how true to the series all the ongoing escape attempts are. It’s a bit disappointing that the game didn’t come out a few years later, because they could have added some Voyager references. In any case, it’s all just setting, since all I could really interact with was a big umbrella and a bottle that arrived after a few turns, containing a matchbook with an ad for applying to a Pirate Academy. By solving a connect-the-dots puzzle coming with the ad and putting it back to the bottle I received a certificate for studying in the Academy. 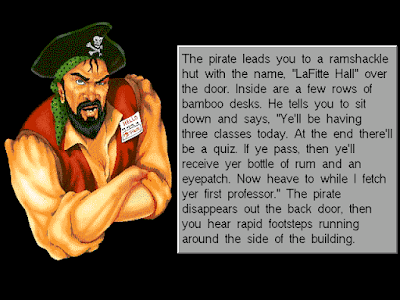 Not much to tell here. I handed the certificate, listened to a few lectures and answered a quiz with pretty obvious answers (“When ordering drinks, you ask for a) grog, b) lemonade or c) a white wine spritzer”). My reward was an eye patch and a bottle of rum. 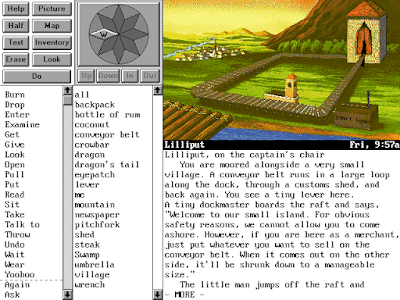 No getting tied up by lilliputians here. Instead, there’s just a device for lets merchants importing goods to make their wares smaller. The device can also be turned for export to enlarge things. I used the device to make the giant coconut and the umbrella smaller and the miniature dragon larger. 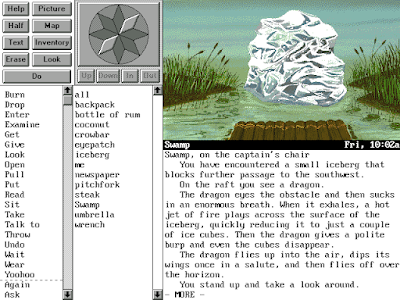 The way to this island was blocked by an iceberg. Getting here with the giant dragon took care of that problem, after which the dragon flew away. 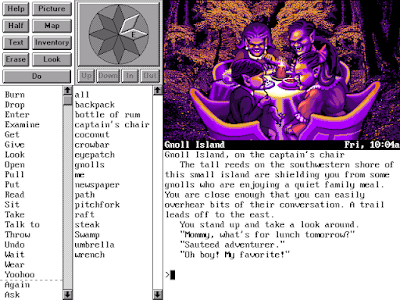 I have no idea if this island is supposed to reference something more than just trolls having a taste of human flesh. In any case, this delightful family has a playroom full of torture and death devices: gallows, a guillotine, a rack and an electric chair. All I had to do was to cut the top of the coconut with the guillotine and put the mini umbrella and rum in it. I had made the drink!

After bringing the drink back to the Fantasy Island, Mr. Dourke returned back to his normal self and handed me the Bolt Cutters of Doom to let Captain Smirk and his crew free. This didn’t end well. 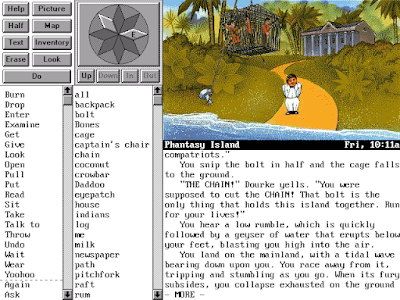 After the explosion, Eric landed beside a black gate and a familiar wizard appeared. 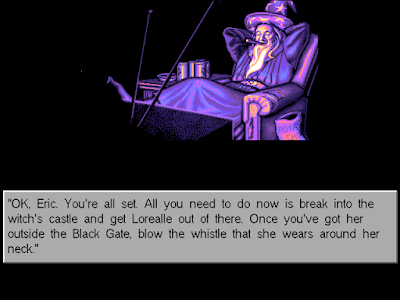 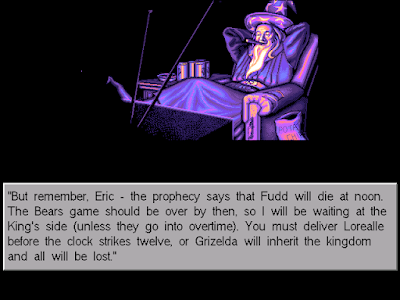 Meanwhile, back in the castle preparations for the wedding were already underway. 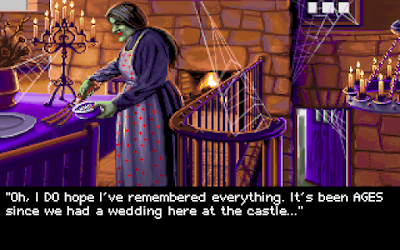 Will Eric be able to save Lorealle? Stay tuned for our next TAG episode…
Posted by Ilmari Jauhiainen at 22:00

Email ThisBlogThis!Share to TwitterShare to FacebookShare to Pinterest
Labels: 1993, Eric the Unready, Ilmari