By Ilmari
I found myself beside a black gate, behind which lied the lair of the evil witch, holding princess Lorealle. The way inside was prevented by five obstacles (moon, tarpit, eye, crow and thunderbolt). There was also a skeleton holding a candygram, which according to a fine print contained explosives that would kill anyone opening it. I also appeared to have a new verb to use (Hoot).

So, there were five obstacles and the whole game has been spent gathering five magical objects (Pitchfork of Damocles, Crescent Wrench of Armageddon, Raw Steak of Eternity, Crowbar of the Apocalypse and Bolt Cutters of Doom) - this seemed pretty simple. Crowbar took care of the crow, Bolt Cutters of the thunderbolt. I guessed Steak should be put on the eye and the Crescent Wrench worked for the crescent moon. That left only the pitchfork and the tarpit.

Five keys for five locks and the gate was open. Apparently the locks had been set up to keep the witch and her evil minions imprisoned. Now I had freed them to terror the land, as long as the castle of the witch stood. As if this wasn’t enough, the witch imprisoned me and set a deadly spell.With that worry solved, I just had to escape the room. There wasn’t any clear hint what to do - even that big book had nothing in it - but I did manage to take that pair of eyeballs and put them in the skeleton, which made the mirror on the wall glow. I received points for the effort, so apparently I was doing something right. Eventually, I tried my new verb (there was an owl in the room) and the spirit of the mirror answered. 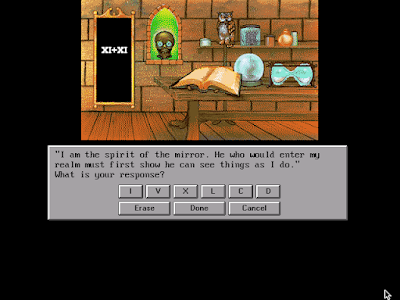 Seeing like a mirror? So backwards? Yep, the correct answer was IIIVX. The mirror opened up and revealed a secret passageway. Entering it I found a chain hooked to the ceiling and running through a hole through the floor. When I checked the hole, I saw that the chain held a chandelier that was straight above a black circle inscribed on the floor. Remembering that the circle was meant to be the place of the Beast at his wedding at the ceremony, I knew I had to somehow break the chain at the right time.Continuing the passageway, I found the witch’s bedroom. On the table I found a pot of makeup that would eat through metal in thirty minutes. I grabbed the pot, went back to the passageway and applied the makeup to the chain, when it was just thirty minutes to the beginning of the wedding. The chain started to corrode, and at precisely 11.00 the chandelier fell on top of the beast, killing him. Her mother, the witch, alerted the guards and killed me at once, when they found me. Not a perfect plan.

After restoring, I continued searching the witch’s bedroom. There was this conspicuous broomstick still lying around. When I had opened the window, I could use the broom to fly, not everywhere in the world, but to few specific spots: witch’s bedroom (where I started), the black gate and another passageway, this time under the Great Hall, where the wedding was to happen. Opening a trapdoor and eating my way through, I found myself in a wedding cake.The events proceeded much like previously, chandelier falling on the Beast and witch becoming enraged. The difference was that I was now beside her and had one turn to do something before getting killed. Perhaps the witch would like the candygram?All I had to do was to blow the whistle the princess had and wait for the Pegasus to get us.At this point, the game is essentially finished. There are still some dots to connect, and this is done in some blocks of text. In summary, the King Fudd, who was prophesied to die all the way in the beginning of the game, is just reborn as a more invigorated king. Her evil wife, who attempted to get her own daughter coronated, is jailed, and princess Lorealle is married to Eric.Next time, we’ll see how well Eric the Unready will score!
Posted by Ilmari Jauhiainen at 22:00

Email ThisBlogThis!Share to TwitterShare to FacebookShare to Pinterest
Labels: 1993, Eric the Unready, Ilmari