Alone in the Dark - Going Underground 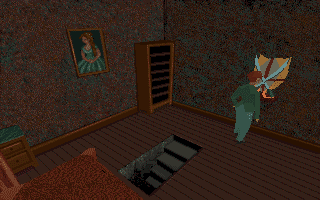 Most of the house is now open to me, and I have explored a great deal of it. What remains is a couple of rooms, and to make my way down into whatever catacombs, caverns and caves lie beneath this cursed house. Last time, I had conquered the library and the Vagabond, found useful tools and information, and was ready to head back down and figure out how to beat the pirate in the front room.

One interesting passage in one of the books was from “The Sons of the Sun and the Shadows” by Lieutenant Lope de Vega. He tells of visiting the Aztecs, of human sacrifice and a statue of the water goddess Chalchihuitlicue. On this visit, they enter the temple and see the great statue, clad in gold and jewels, coming to life before their very eyes. Captain Cortez cried for them to attack, but they were stuck in place. Their armour seemed bolted to the temple floor, and only thanks to Cortez killing the priest with a well placed throw of his dagger, they were able to escape. The attached picture of the statue looks a lot like the heavy statue I picked up from that small dark bedroom. 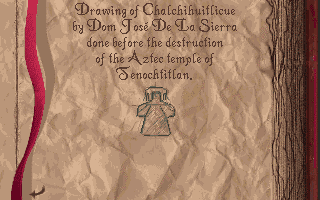 Outside of the library of course is the armour that cannot be harmed by any of my weapons. Could it be that a statue, heavy though it is, could be the solution to its demise? With statue in hand, I position myself appropriately and, with one of the only two options available to me, hurl the statue at the suit of armour. With an almighty crash, the armour crumples and collapses to the floor, yet another nemesis despatched. Who knew the power of a well-carved heavy artwork. I wonder if it has any other uses, but it’s too heavy to keep around so I leave it where it lies. What I will take with me is the rather sharp sword the suit of armour had been carrying. 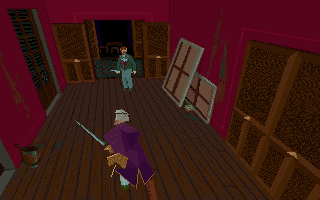 This newfound weapon is surely just the thing to deal with that pirate. Heading downstairs, I enter the room where he lies in wait. It’s a plain room, in need of some renovations, but provides ample space for a duel. Alas, every time I swing my sword he parries with a clash of steel on steel. My only hope is to strike first, so I push in closer and try to swing faster. With every parry I edge him further back, until his back is against the wall. Suddenly I have the upper hand, able to strike again and again until the pirate is no more. All he leaves behind is a key, a shame really. There is also a book in the room, detailing an arctic adventure and the “Prisoners of Ice”, which is yet another Lovecraft reference and perhaps a game we may see on this blog in years to come. 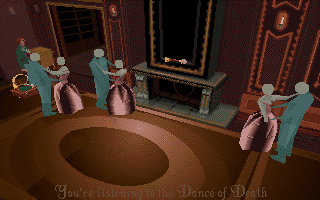 The new-found key is to the ballroom, which contains four couples of ghosts, dressed to dance. Good thing I’ve been carrying this gramophone around with me! I have a few different records available, but of course it’s the Dance of Death that they desire. I was hoping they would disappear after a while, but instead this becomes a rather tricky movement puzzle, as there is an interesting looking item (a key, I discover later) on the mantelpiece. This took me a few attempts, as a single touch on a ghost will turn them into a colourful, whirling spectre of death, and as the awful noise of their anger fills my ears they strike me down. On my third attempt I manage to grab the key and make my way out, and then the ghosts decide they must have their rest.

It seems I have explored the house to its fullest, and so must brave what lies beneath this house. Eschewing the cellar entrance, because of those damned rats, I instead make my way down the hidden passageway in Jeremy’s study. The stairs lead down to a chamber with a wooden bridge across it, and the possibility of a fatal fall should I stumble. What’s more, the bridge collapses as I walk across it, necessitating a need to run quickly. I guess there’s no way back now, I hope I have everything I need to finish this. 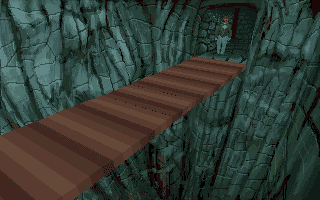 The caverns beneath this house are huge, and I worry I’ll get lost, or worse, succumb to whatever horrors stalk me from the shadows. Their construction is crude, and the reddish-brown earth makes me think I am inside some hellish creature, travelling down its throat to my inevitable demise. There is a noise in the distance, and I turn a corner to see a huge worm or slug-like creature filling the passageway in front of me.

I wonder which parts of this were made by Pickford’s excavations (or rather, his servants or slaves), and which are made by creatures such as this. Perhaps this thing came to live here later, finding a home amongst the tunnels and expanding them to fill and fit its form. Unfortunately, it is in my way, and I have no idea if I can kill it, so I’ll have to find a way around. There’s not a lot of alternative passages, but just enough to make sure I could get a little bit lost, or at least just unable to find a way out. 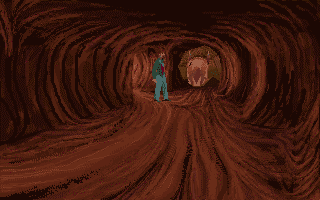 It seems this creature moves in a circular fashion, and my attempts to get away from its movement are often stymied by the uncertain nature of this movement. Another obstacle was a toothy duck monster attacking at a really inconvenient direction, and thanks to the fixed camera made it a little bit of a challenge to kill. A challenge I met with the rifle that I had been storing up. 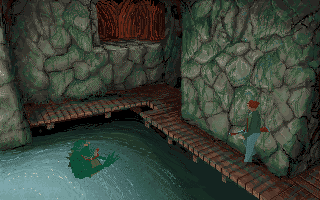 Anyway, there were only really two ways to head from there, back to the cellar (not a great choice, but a way out at least), and further onwards to an underground chamber half filled with water and home to a fish-like hominid. No “Shape of Water” romances here, this thing just wanted to eat me. The walkway around the water (very helpfully placed by persons unknown) was just wide enough to easily walk on, but not wide enough to hide from my fishy friend. What’s more, another falling bridge lay in my path.

Falling here was a very bad idea, as it soaked my rifle cartridges rendering them useless, and also soaked my lantern. I wondered how I might get past this point, after reloading and trying to run for it, but a new option on my action menu gave me pause. There’s a “Jump” option. There’s no way this is here for a single jump, but more on that later. This particular jump required me to manage to get as close to the bridge as possible, and try and orient myself appropriately before making the leap. 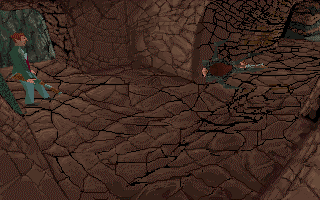 Thankfully I made it, and then had to run around the rest of the walkway to a place where I could climb up to safety. Well, safety of a sort, as I was met at the room at the top by some sort of foul half-rat, half-spider monstrosity. Having saved my rifle cartridges, this seemed an ideal time to put them to good use, and I shot the creature dead. The number of unique monsters in this game is quite impressive.

Beyond this room my heart sank. I walked out onto a ledge overlooking a deep water-filled cavern. Standing in the water are five pillars of squared stone, but no bridges in sight. It seems my “Jump” action is going to get a lot of use here. Before saving and leaving this to another day, I used another couple of rifle shots to take out a flying creature that would certainly have been a nuisance when trying to line up the jumps as I needed. Surely I can’t be far from the end of this game now? 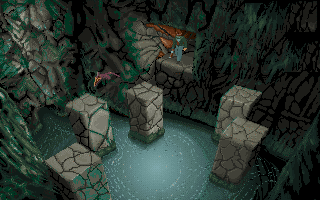