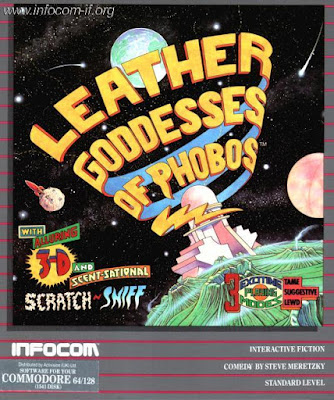 What can I tell you about Leather Goddesses of Phobos? Let's check in with wikipedia...

A goddess is a female deity in polytheistic religions

Well, that explains it.

Leather Goddesses of Phobos are female deities from a moon of Mars who are made from a durable material.

But that's not the image I get in my head when I read the title.

Leather Goddesses of Phobos had an obvious clickbait title decades before clickbait titles existed. It makes you (or me, at least) think of scantily clad (leather-clad obviously) women (perhaps with omnipotent parents) from space.


The game was written by Steve Meretzky, whose work as we've seen in Planetfall, Spellcasting 101 and Spellcasting 201, and to a lesser extent in Gateway and Timequest.

The game name existed for many years before the game itself was even thought of – apparently in 1982 Meretzky added the name “Leather Goddesses of Phobos” to a list of the company's games on a chalkboard as a joke. The name was removed before anyone outside the company saw it, but it remained as an in-joke amongst the staff, and was used a few times in other games, including Starcross (did you notice it, Joe?)

The game came with some 'feelies' including a comic of “Lane Mastadon where Lane Battles the Shameless Leather Goddesses, in actual 3D!!!

Anyway, on with the game.

Each time I do something my urge gets more urgent.

At some point the urge in my bladder becomes too much and make a mess before two aliens (who speak English) appear and decide I'm worthless and take someone else instead. Three weeks later, the Earth is invaded and everyone is enslaved by the Leather Goddesses of Phobos.

There are only two places I can go from the bar, the ladies room or the gents room. This is an in-game gender selection, which I like – much better than a “What sex are you? Press M or F” Though I could easily imagine a Larry Laffer type immediately checking out the ladies room first.


I take the stool and am promptly abducted by a tentacled alien.


I wake up in a cell, which contains a painting of a pussy, a flashlight and a blanket. A guard shoves a tray of brown food at me, which I smell (chocolate). I take everything and open the cell door, surprised that it isn't locked.

In the only other cell in the area, I find an occupant, Trent (Tiffany if I play as a woman)

Trent gives me a matchbook with items we'll need for him to create a Super-Duper Anti-Leather Goddesses of Phobos Attack Machine!!!


With Trent following along, I do some more exploring and find a closet with a two foot diameter black circle painted on the floor. I enter the circle (I have no idea why I thought it was enterable but it was the first thing I thought of trying)


I end up in a jungle being followed by a giant Venus flytrap. Trent and I escape and climb into a hole in the forest. Not being able to reach us, the Venus flytrap gave up and left but Trent and I were stuck in the hole as it was too deep to climb out. This was where I got annoyed with the parser. I wanted to climb onto Trent's shoulders, or have him do the same to me. I tried the following options...

Frustrated, I checked online for hints and found out the right syntax to do exactly what I'd been trying to do for ages.

I'd also previously tried using Trent to reach a high shelf back on Phobos, to no avail, so I went back to a previous save and picked up a wicker basket using the 'Stand on Trent' command, and continued playing until this point.

Having escaped the Venus flytrap and the Walkthrough-inducing hole, I continued on through the jungle, picking up a can of “MarsCo Brand Black Hyperdimensional Transport Circle Stain' on the way, and found a house with both a front and rear entrance.

The rear entrance was besieged by an 'extraordinary number' of door-to-door salesman. One salesman was desperate to barter with me, so I offered him some of my stuff. He rejected all my items apart from the flashlight. I'm not sure I won't regret this later when I go to Planet of the Grues, but I give him the flashlight. He gives me a TEE remover, but doesn't explain what it does.

Before I can ask any questions, the salesman is carried off my a giant Venusian MegaMoth. The game proclaims that 'The other salesmen scatter like frightened salesmen.' I got another good chuckle at this line – the humour's working for me whenever it's not resorting to innuendo.

Once again, I surprise myself by guessing what something in this game does, I use my TRAY with the TEE remover machine, turning it into a RAY, which 'looks a little like Ray whtsisname from second grade'. I also use the blanket, turning it into a blanke, and so on. I restore my game until I know what I want to remove a 'T' from, and try the other door.

Knocking on the front door has a mad scientist who (surprisingly for a Venusian) speaks with a German accent. After locking the door and dissolving the key in a vat of acid, he grabs me because I'm just the type he needs for his experiment. I try to push him into the acid, but the game informs me it doesn't know the word 'acid' – get stuffed game, you're the one who brought 'acid' up in the first place.

After unsuccessfully trying a few more things, the scientist forces Trent and I down a chute into his lab, where he has two caged gorillas and two slabs for strapping down human victims, along with a red power switch.

I also notice a rubber hose in the gorilla cage, which excites me because it's on the list we need to create Trent's machine. After a few moves, the scientist straps us down onto the slabs. I wait, then the scientist pulls the switch and I'm inside the cage, and inside the male gorilla. Being that this is the first time I've been in a room with a member of the opposite sex and this is a supposedly raunchy game, I make advances to the other gorilla. I think I solved a puzzle accidentally, because the scientist leaves, stating that 'Der sex drive uf a species resides in der body, not in der brain'.

I know that if I can get out of the cage, I can pull the switch and hopefully get back into my own body. I tried opening the bars of the cage but wasn't quite strong enough. The game points out that the bars almost give. Deciding I just need a little help, I scan the room. Trent and my body are useless on the slabs. I try everything I can think of to get the female gorilla to help me with the bars but can't get the game to understand. Remembering the incident with Trent's shoulders, I turn back to the hint book to work out how to get Miss Gorilla to help me with the cage.


On checking out the hint book, I found out that the answer isn't to get the female gorilla to help me. I was actually dead-ended because there was something I needed to do before being turned into a gorilla.

Egad! I'm stuck in the cage in the body of a gorilla!
Ah. I see. I needed to give the chocolate to the gorilla before getting strapped down. I was a little disappointed in myself for turning to a hint book so early, so apologies for that. My frustration with the parser earlier made me impatient. And I could argue that the parser should have given me better feedback with my attempts to garner assistance from the female gorilla – perhaps a 'she doesn't seem interested in helping you and lays down and goes to sleep' instead of a generic error message would help.

I reload and give the male gorilla the chocolate before the scientist straps me down this time (actually I completely restarted the game because I'd eaten the chocolate earlier on and forgotten to restore my game).

I grab the hose, eat the chocolate and can now open the bars. I untie myself and Trent, drop the hose and pull the switch.

Back in my own body, I leave the slab and take the hos...


Having screenshotted the game, I drop the matchbook (Trent refuses to take any of my items), hoping I won't need it again, and pick up the hose. I now have 1 of the 8 items I need to (presumably) win the game. I feel so proud.

We'll stop for now and continue next time when I spend some time on Mars.