Brandon’s journal - entry #1 : Damn Malcolm! This monster has turned my grandfather Kallak to stone! And now the wooden wall of his hut starts talking to me telling me about my destiny and how I’m supposed to fight this jester devil and save the world! Now if I could only find a way to read the magic note that I found on grandfather’s desk? Maybe Brynn will be able to help me…

Note : having experienced a tragic MacBook crash, this post will be shorter than usual in order to be able to release it (somewhat) on schedule. Sorry about that guys, I promise you a full-length post for next week! -Alfred

First of all and without further ado : playing Kyrandia nowadays is still a blast! The MIDI music and the low resolution graphics are still as beautiful and enchanting as it was before. Pixel art is still what’s holding up best, especially when you compare it to digitized graphics or early 3D ones! But enough of this for now, let’s try and figure these puzzles out…


The first thing that happens to you is the wall of the hut animating itself and talking to you. It tells you you have to stop Malcolm because you were chosen for it. It doesn’t give you much, though, even after Brandon pleading he wouldn’t know how to start.

I thoroughly examine Kallak’s hut, finding a note on the table (unreadable except for the name “Brynn” from the nearby temple written on it), a garnet, an apple (in the pot) and a saw (well hidden under the table, pixel hunting, here I come!). With four (!) items to find on the first screen, I’m guessing there’s gonna be a lot of inventory puzzles on this one. I exit the hut, using a moving branch as an elevator (which appears perfectly normal to Brandon while he was shocked to find the wall speaking…)

This is a game that involves mapping. A lot of the screens around the forest just look the same. On the plus side, it makes the world bigger than it really is, while on the minus side, it can sometimes feel like repetitive scenery. Thankfully the gorgeous graphic and fantastic music do a great job easing you through the world and I never felt bored (with Brandon’s walking speed put to the max).

Once out of the hut and down the natural elevator, I go west towards Brynn’s temple. On the way I pass a dead willow tree with a tear-shaped mark in the trunk. Probably Malcolm’s work as well.


I reach Brynn’s temple who uses her magic to translate Kallak’s message. He asks her to direct me towards the amulet (whatever that is) and to use the lavender rose to key the spell. Still cryptic, Brynn sends me on my way to get a lavender rose.


I exit the temple and start to map out the eastern area of the hut. I see three major points of interest. A lake with tears falling into it (I grab one of them) and an altar surrounded by lavender roses (which I hungrily grab as well). The third point is a cavern in the south where the bridge that allows passage to other parts of Kyrandia has collapsed. I meet with a guy there who tells me he’ll need a saw in order to repair the bridge. I’m happy to oblige.


Herman leaves the cave to get some planks. On the way exploring and mapping the forest I found two more gems to add to my collection which are an emerald and a sapphire. I know the fact that gems appearing randomly out of the blue is somewhat justified in the second part but we’re touching what is probably one of the weakest parts of the game : half-randomized item placement. I know it’s the biggest part of what will be our first major puzzle (coming soon) and can’t remember if that happens later in the game. We’ll see about that, I guess. On my way, I pass again in front of the dead willow tree. I put the tear I got from the pond in the recess… The results are great and the tree gets back to life!


As soon as the tree is restored, a kid, Merith, enters the screen. Brandon and him seem to have a history of playing together, probably hide and seek, considering that Merith immediately tells Brandon that he has found a marble and that he has to chase and catch him if he wants it. Before chasing him, I finish my trip to Brynn’s temple and hand her over the lavender rose.

She transforms the rose into silver and tells me I have to use it on the magic altar in order to get the amulet. I exit the temple again and start chasing Merith.


After a few screens, I get in Merith’s back (involuntarily but still) and be able to surprise him in a nice and friendly way : 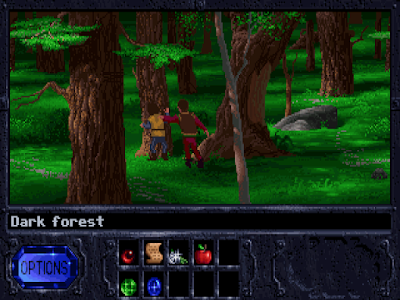 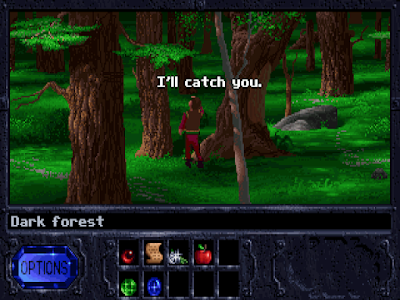 This little bit of slapstick allows me to get the marble Merith found. It allows me to “reboot” the altar that lights up with magic. Putting the silver rose on it makes my inventory flash and sparkle… the amulet appears! Well, for now, it’s pretty useless. I’ll need more time to reveal its powers. I come back to the temple. Brynn is nowhere to be seen… the plot thickens…


Going back to the bridge, I see that Herman has finished his job. I can cross it to the Timbermist Woods, where my next adventures await!