We reviewers have rarely explained in detail our methods of deciding the individual scores for each category. I am sure there are as many ways to do it as we have reviewers, but personally I like to pick a few games to compare with the game I am rating. If the game is part of some series, I’ll choose an earlier part of the series, just to see if there has been any progression or regression. Even if the game is a part of a series, but especially if it isn’t, I’ll also take as a reference point a game that has something similar to the game I’m rating, but which is otherwise not related to it. Finally, I want to choose game reviewed by another person, just so my ratings would be in line with what the other reviewers are doing. Thus, when I have rated games by Level 9, I have made comparisons to my own earlier reviews of their games, but I’ve also checked what ratings Joe Pranevich has given to Infocom and Sierra Hi-Res games with similar themes.

After having played lot of early Coktel Vision games, I was quite surprised of the quality of the puzzles in Fascination - it’s like they finally realised what makes an adventure game an adventure game. The game had sensible problems with sensible solutions, not based on minigames or external sources of information, but on the logical use of items you’ll find.

Furthermore, while most of game puzzles were very simple to solve, there were few quite intricate solutions, which is quite rare in a game with so streamlined and minimalist interface. Take, for instance, my absolutely favourite puzzle in the whole game, the MacGyverish application of ordinary kitchen utensils in getting rid of a gangster. The whole setup involved an intricate series of stages, making it almost impossible to just click your way through this puzzle. What’s best, once I had found out the complete solution, all the parts just made sense, making this a seamless whole.


Of course, complexity of puzzles might have its downsides, because too much intricacy can make solving problems impossible. The puzzle involving birthdays and an organ bordered puzzles of this category. It assumed the player knew musical notes and signs of zodiac and made the whole thing even more complicated with red herring birthdays. Furthermore, there was a lack of feedback that would have indicated the player was on a correct route. Still, this is only a one bad puzzle in a group of mediocre or even good puzzles.

Looking at the competition in my reference group, the best score for this category was 4 from Legend of Djel, which lacked any truly challenging puzzles, excepting some minigames and resource management, and was mostly just a simple case of clicking everything, and from Eternam, which suffered from a general lack of consistency in puzzle solving. Fascination clearly had better puzzles than either of these games. Still, it had one, possibly game-stopping bad puzzle, and in addition, at least one possible dead end (if you didn't find five of the six newspapers hidden in the game, you wouldn't get through the final puzzle of the game). These faults prevent me from giving really extraordinary scores: 5

Of all the games of Coktel Vision I have played so far, Fascination had the smoothest interface. If I moved the hand icon to a hotspot, a description showed what I had found, and left-click did some action. Right-click opened up an inventory, which was admittedly a bit boring - just a list of what I had picked up. Then again, choosing an inventory item changed the pointer icon, if I wanted to use an object on something.

Looking at the competition, Geisha, with a reasonable, but still somewhat cumbersome interface got only 4, which was the best score out of the lot. Simple and effective interface of Fascination beats that, but the lack of pictures for inventory items again prevents the game from getting top scores: 5

The basic premise of the game was pretty straightforward B-class comedy action flick stuff. There’s this clever invention that you must prevent from getting into the wrong hands. All the good guys appear to get killed or at least incapacitated, before they can really help you. There are crooks to be fought with, a damsel to save from distress, and the ultimate bad guy holds a cat. Nothing original, but then again, nothing overtly offensive.

Except the ending. After a more or less conventional plot, with twists that could be seen from miles away, the game decided to turn it all into a Mel Brooks farce and do away with the fourth wall. In a previous post, I compared Fascination with The Game, but the difference is that The Game had foreshadowed its ending, long before we get to it. On the other hand, the end of Fascination came completely from left field and felt truly abrupt.

How does a comedy action flick with an unsuccessful surprise ending fare with the rating? I certainly won’t give Fascination 5, which Legend of Djel really deserved - that game had a truly intriguing plot, even though it had some plot holes of its own. Then again, although Fascination is plotwise somewhat similar to Geisha, which received only 3 in this category, Geisha had an even less involving plot and more bizarre ending (I mean "it was all just a game" at least makes sense, while "I shot the mad professor with a gizmo and he turned into a naked woman" just doesn't). On the other hand, I feel completely justified in putting the story of Fascination in the same ranking with Bargon Attack and Eternam: 4

I freely admit that this is the category I have most trouble with - I am so literary person that I often fail to have anything to say about the visual and aural arts. I’ll then just skip right to comparing Fascination with the other games. The graphics had clearly improved from previous Coktel Vision games, although slight pixelation still occurred occasionally.

Fun little animations, which have always been a forte of Coktel Vision, were as abundant as ever. There was even a bit more music than in the previous games - small musical pieces could be heard throughout the game. In any case, I am fairly happy with giving Fascination a better score than rest of the Coktel Vision games in the reference group (they all got 5) and landing it in the same place with Eternam: 6

Except for one detail. I can well accept that rape can be an important topic in a work of fiction - it would certainly be a difficult topic for an adventure game, but if handled properly, it could make for an enlightening and thought provoking experience. But it doesn’t belong in a game, which takes such a frivolous and carefree attitude towards sexuality. Rape, I’d say, is nothing to make fun of, and any attempts to work humour out of it, usually end up flat. Fascination is no exception. Indeed, it is even more disturbing example, because you could say it involves a dual rape - the rapist himself is an unwilling victim of a mind altering drug. Remember that I was afraid that Fascination would follow in the footsteps of Click!? Well, it did, and I am definitely not happy about it.

All in all, Fascination suffers from a lack of consistent tone, which has often been a mistake in Coktel Vision games. In this case, this lack of consistency is so disturbing that I am perfectly willing to use lower score than in the reference games: 2

If we ignore the occasional sex jokes, the dialogue is rather straightforward and thankfully doesn’t attempt to be too fancy, which in Emmanuelle and Geisha was just a source of unintended snicker. All in all, the text was mostly adequate, with only few typos or translation errors. There were no real dialogue trees, since either I got not options to choose from or then there was only one or two correct paths to choose from. I’d otherwise be satisfied with an average score, but there were a bit too much bad jokes to bear: 4 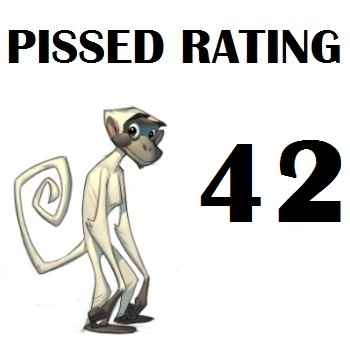 Looking at the reference games, Fascination beats Geisha and Bargon Attack easily, performs slightly better than Eternam and barely loses to Legend of Djel. This makes sense somewhat. The technical side of Fascination is definitely better than in the other Coktel Vision games - it looks and sounds nicer and the interface is certainly smoother - and while visually and aurally Eternam is on par with Fascination, the former certainly had a worse interface. The puzzles of Fascination are of much better quality than in the other games. Storywise, all the games in the reference group were at least as ridiculous as Fascination, except for Legend of Djel. All in all, I am fairly satisfied with the score.

Did anyone guess 42? No, but Laukku was closest with a guess of 43, so the Psychic Prediction Awards goes to him! Here are the further CAP awards.