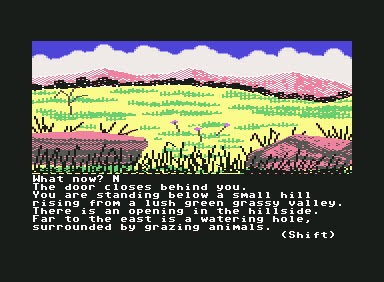 I landed on a prairie, with large animals grazing around me - dinosaurs. I particularly ran into one allosaurus and one tyrannosaurus, which both started to follow me and finally had me for a lunch, if I happened on the same screen with them. The obvious answer was to lead the allosaurus to the tyrannosaurus and watch the two take care of each other.

With the dinosaurs taken care of, I could continue mapping the prairie. Soon, I found myself at the bottom of a pit, which had been hidden by a bunch of fresh-cut leaves. I took the leaves and a strange mirror that had been half-buried in the ground. What was so strange about the mirror, you ask? Well, if I tried to examine it, the mirror expanded and swallowed me, leading to a game over,

My next task was to get out of the pit. Fortunately, a brontosaurus was peering at me, and if I gave the leaves to it, it would lift me from the pit. Problem was, the brontosaurus then prevented me from walking anywhere. I finally tried waving the mirror that I had just found in front of the brontosaurus, and indeed, the dinosaur was swallowed wholesale. I noticed quickly that if I tried to drop the mirror, it would break and release the dinosaur.

The manual had already mentioned that I would find cavemen and dinosaurs at the same period, due to the meddling Timelords, so I wasn’t particularly surprised when I found a cave full of human beings. The cavemen didn’t like me and promptly killed me, if I loitered around for a while. The simple solution was to break the mirror and let the brontosaurus chase away them.

The cave system was one of those illogical maps I really hate to explore - if I went west, going east wouldn’t lead me to the original room. I did manage to find several interesting things:
The stone club just begged to be used, but it didn’t work against the animated skeleton, which would just kill me, if I attacked it. Instead, it was pretty obvious that I should use the skull-like pebble in some manner. The graphical version even hinted that it would be ideal for throwing. Indeed, throwing the pebble at skeleton destroyed the magic animating the thing. As a reward, I found a carved tiger figurine.

The caveman was resilient to my attacks. The graphical version once again gave the additional hint that a well placed missile might be able to take care of him. Indeed, throwing the club at the caveman killed him. The cavewoman I had released showed her gratitude with a gold nugget, which by pure chance resembled Venus of Milo without her head and arms.

All that was left to solve was the invention room. In the original version, this puzzle was just incomprehensible. The graphical version was kind enough to give an obscure hint, telling that I found a cartoon of a man taking a bath and saying “backwardness can make rueful”.

The first thing that came to my mind from bathing and invention was Archimedes, who was famous of saying Eureka, when he entered his bath and noticed the water that was replaced by his body mass. I didn’t get it at the time, but it now seems obvious that the latter part of the hint was meant to point out that EUR is RUE backwards.

In any case, saying Eureka opened my way to the next room, the invention alcove. This was a slightly better puzzle. I saw JWAAMTETS inscribed on one wall. Taking every other letter I got JAMES and the rest of the letters spelled WATT. Saying James Watt I got inside a small recess, where I found The Wheel, world’s first hard disc. For some peculiar reason, dropping The Wheel returned me back to my time machine, although I of course didn’t want to do that and miss one treasure.

Entering the next time zone, I encountered a completely new problem. In all the previous time zones the door to my time machine had remained visible, but when I now exited the clock, it and the door were gone. I could have used The Wheel to get back to the time machine, but I didn’t want to lose it. Yet, I already had an idea of the solution. I haven’t mentioned it, but in all the time zones I’ve visited, I have found a sort of “backdoor” to my time machine. It hasn’t been a literal door, but more like some dimensional wormhole hidden in some crevice, which has led me inside the clock. I was probably supposed to find the backdoor in the current time zone.

I could see a Viking ship, which unfortunately appeared to be nothing but decoration, and a lone guard, who appeared to be shivering. I gave him the mammoth skin and he handed me a lur, mentioning that there was a reward for capturing the pirate. Sure enough, when I played the lur, a horde of vikings appeared and were very angry that I had summoned them with no Pirate Pete around. Game over.

I am a bit perplexed what time this is meant to be, since Viking Era is definitely distinct from the Golden Age of Piracy. Yeah, I know pirates as such existed outside the 17th and 18th century Caribbean, but it still seems weird - especially as Vikings could also be called pirates.

It appears to be a common trope in early adventure games that pirates live in caves - at least this one was close to sea. One cave room was told to have a soft ground, which seemed an obvious hint that I should dig there. Indeed, I found a parchment with the following poem:


To the sunset you must go,
keeping high and never low.
In a sheltered, hidden cove,
you will find a treasure trove.
Pitfalls you are sure to meet,
you may even get wet feet!
but in the end you are sure to greet
that dreadful scoundrel, Pirate Pete!

This was a pretty clear instruction to go west and up, but where should I begin? I managed to find a cave room, with a rocking boulder blocking further movement. Pushing the rock away, I found myself in yet another cave maze, where walking anywhere else but west or up led me inevitably to a death by giant squid or water scorpion.

At the end of the maze I found the pirate’s hideout with a large chest. When I opened the chest, Pirate Pete jumped out and stole something from me. When I played the lur, vikings came and took the pirate away, at the same time handing me an olive branch, which was one of the quest items.

The chest was huge enough that I could enter it. It contained whatever stuff had been stolen by the Pirate Pete, but also a handle. By pulling the handle, I found the backdoor I had searched and could now continue my travels in time.

At the start of my next adventure, I found myself on a road leading to a small village. A milestone, which I of course pocketed like a true adventurer, told me that I had come to Hope Village.

Like all good villages, Hope came with an inn. There was a cask of ale on the table, but the bartender wouldn’t let me take it without a payment. Fortunately, he accepted my gold nugget.

Moving along, I found several things of interest:

It was pretty clear that the thirsty guard wanted some ale. As a reward, I received some food.

The dragon in the copse was hungry, so it was a natural move to offer it some food. Dragon thanked me, although it would have liked more mustard. The noble beast offered to take me to a ride, but after a short flight, the dragon dropped into the castle moat and went away soaking wet. Still, I had gotten to the other side of the moat, although I had now no way to go back the other way.

Looking around me, I found a small dragon wing, which I would require against the Timelords. I also noticed a small frog, which obviously was in need of some smooching. The animal turned into a handsome prince. Considering that the anonymous protagonist expressly likes to keep on kissing the formerly-froggy-prince, we can definitely say this is pretty progressive game for its time.

In the castle keep I found a gauntlet, an armour and a black knight preventing me to go further. The black knight attacked me, but wearing the armour prevented my death. Then, the prince dealt with the knight and carried the body away.

After taking stairs down I found myself in the castle dungeon. The ground was disturbed, which was again a sure sign to dig. At first, I found an empty, but bejewelled coffer, and after that, the backdoor to my time machine. Time to go to the next zone.

My target this time was a stately manor. 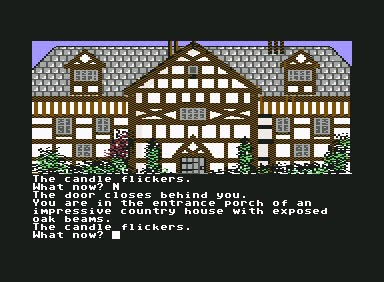 Starting with the first floor I found:
My first thought was to give the jester the pack of cards, but that wasn’t the solution looked for. Instead, when I examined the cards in the graphical version, it told me that I could shuffle the cards. Of course, you can do it, but it’s not a verb you’d expect to be used in an adventure game. Well, I shuffled the cards, found the joker and gave it to jester, who rewarded me with his cap. Another object in Timelord shopping list crossed.

Was I searching a medieval mansion? Or could it be from some later period? Jesters did exist in renaissance too. I continued upstairs, but the things I found there didn’t really solve the problem:
If I lingered too long in the same room with the dogs, they alerted the guards. Fortunately, the sweetmeats, which I had found downstairs, kept the dogs happy. Within the ottoman I found a valuable crown.

Playing the lute I had just found, I was told that I heard ghostly steps moving to the stairway. Playing again in the stairway revealed a secret door. Behind this door lied a hedge maze - again just a filler. At the centre of the maze I found a well with water that boosted my strength, and within that well, a backdoor to my time machine.

Only three time zones to go, so this is a perfect time to stop. I can already say that the four zones I now played were a bit of a disappointment. Many of the zones felt like I had seen them before, and there were too many mazes to my taste. I am hoping that the final zones will add something interesting to the proceedings.

Email ThisBlogThis!Share to TwitterShare to FacebookShare to Pinterest
Labels: 1984, Ilmari, Lords of Time