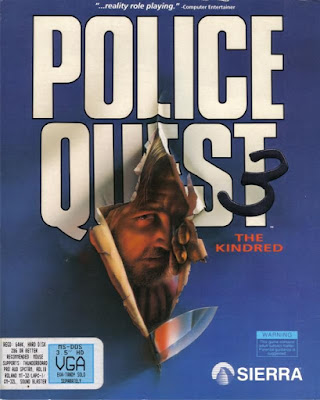 Released for the IBM PC and the Amiga in September of 1991 (according to Giant Bomb) or October (according to MobyGames), Police Quest 3 (according to the box) or III (according to the game itself), subtitled The Kindred, takes the series into the VGA, 256-color point-and-click, a place Sierra had been transitioning many of its long-running adventure series during the early 1990s. King’s Quest first got the king’s treatment in 1990 with King’s Quest V, followed in 1991 by Space Quest IV and a remake of Space Quest I, Leisure Suit Larry 5 and a remake of Leisure Suit Larry 1, and finally this title. More series would follow suit, as well as a bevy of new titles, some of which would spawn franchises of their own, created with ever-improving presentaiton.


I don’t need to go into the technical specifics or the history of Sierra’s Creative Interpreter (SCI) interface, so here’s the quick version: The player clicks instead of types to interact with the game world, and the graphics are better than the company’s older, parser-driven games. Remember, these were the days before the Internet, so this was a BIG DEAL to old farts like me.

This was a heady time in general for computer gaming, as the technology was allowing many companies, such as LucasArts, Origin, MicroProse, and Electronic Arts were pushing the envelope in graphics, music, and sound, but in overall game design as well. RPGs became more elaborate and plot-intensive, strategy games were being thrust into exciting new realms, and adventure games received their fair share of upgrades in terms of bells, whistles, and stories. Now (so goes the conventional wisdom) . . . now designers could tell the tales they always wished they could, unfettered by technological limitations and a public unwilling to accept video games as a viable storytelling medium!

The particular storyteller here is Jim Walls, retired California highway patrolman and designer of the first three games in the Police Quest series. As with his previous efforts, parts of Police Quest III are based on his own experiences on the force. And of course, his knowledge of police procedures and practices give both games a sense of realism heretofore missing from video games. Again, that is, according to the conventional wisdom.


Trickster liked both the first and the second installments in the series, finding that Police Quest I’s overreliance on following proper police procedure, and hence referring to the game’s manual, didn’t do much to enhance his enjoyment of the game, or it’s puzzles, while Police Quest II struck a better, more enjoyable balance.

Speaking of the manual, Police Quest III comes with a relatively straight-forward version of the Lytton Police Academy’s Procedure and Operations Manual, Lytton being the fictional California town that is the game’s setting. It serves as a primer on some basic police procedures, lingo, and radio and penalty codes, as well as a scrapbook of the main character Sonny Bond’s career up to this point. It also has a map.


I’m sure that, as in the first two Police Quest games, this manual will come in handy for puzzle-solving.

One important note before I begin playing Police Quest III: I last played this game over 15 years ago, didn’t enjoy it much, and never finished it. That said, I am going into this game completely unbiased and ready to enjoy and assess it, free of nostalgia and its concomitant distortion of perception. In other words, I’m gonna be fair.
Note Regarding Spoilers and Companion Assist Points: There's a set of rules regarding spoilers and companion assist points. Please read it here before making any comments that could be considered a spoiler in any way. The short of it is that no CAPs will be given for hints or spoilers given in advance of me requiring one. As this is an introduction post, it's an opportunity for readers to bet 10 CAPs (only if they already have them) that I won't be able to solve a puzzle without putting in an official Request for Assistance: remember to use ROT13 for betting. If you get it right, you will be rewarded with 70 CAPs in return. It's also your chance to predict what the final rating will be for the game. Voters can predict whatever score they want, regardless of whether someone else has already chosen it. All correct (or nearest) votes will go into a draw.
Posted by Ilmari Jauhiainen at 23:00