Leisure Suit Larry 5 – You Are What You Is

Commenter The Mara recently noted that her question, "[H]ow much more tasteless can Leisure Suit Larry get" is one she has to wait for the answer to. Well, the wait is over. Hold on to your Tardis, because here comes the stupid!

So here’s Patti, outside of K-RAP studios in Philadelphia.


Regardless of where in America the Passionate One is, she needs to gather evidence that P.C. Hammer is in the pay of the mob. Nowhere to go but into the studios.

Patti faces no obstacles getting inside, mainly because this is Leisure Suit Larry 5, and there are no obstacles.

Inside, there is only one room and one exit. Checking out the door informs Patti that it belongs to the sophomorically named Mr. John Krapper, the Founder, Owner, President and C.E.O. of K-RAP. Also, contrary to popular belief, NOT the inventor of the flush toilet, that being one Mr. John Harrington. The more you know . . .

Clicking “Eye” around the desk informs Patti that the receptionist will be on her way back soon, but being LSL 5, there’s no time limit, no pressure, no nothing. There is nothing to do with the desk or the plant in the foreground, nor can Patti open the door. However, there is a touch pad next to the door. Realizing that the only option is to enter the access code displayed on Patti’s DataMan when the P.C. Hammer cartridge is inside (1 point), I get into Mr. Krapper’s office before this supposed receptionist returns from wherever she was.

Krapper’s office is decorated in a modern style that Patti seems to really like. There’s a door to the left that leads to the toilet, but I decide to explore the room for some evidence first.

By chance, I click “Eye” on the large potted plant to the right. Patti sees something glinting in the soil, and rummaging through courtesy of her handy-dandy “Hand” icon, Patti finds a small key (10 points). I wonder if it opens that desk there?

Opening the desk drawer gets Patti a cool 13 points, and inside she sees a sticky note with the numbers “57033” written on it (5 points). There’s also a folder labeled “Personal,” which Patti takes (5 points). Checking out this folder in her inventory screen, Patti finds a paper that refers to mob activity and is signed by someone named Julius (4 points). This guy is everywhere!

Okay, so Patti has evidence that K-RAP is getting mob money. But the game then wonders how Patti can get the evidence out of the office.

It’s a good thing that Krapper keeps a photocopier in his office. Before heading to that, I decide to click “Eye” on the desk to see what there is. Nothing but a computer and a phone Patti can’t use, and a letter opener, which she can take (4 points). I don’t know the point of this, until I click it on the desk. Turns out Patti can use the letter opener to unlock the desk drawer, supposing she doesn’t find the key in the potted plant. A puzzle redundancy, commonly referred to as an alternate solution. In principle, I approve of these. In this game, it seems like a moot point.

Patti gets her copies (12 points), but the printer jams, and mucking around with it results in a small explosion, covering Patti head to toe with black toner.

Stop me if you’ve heard this one before:
If you’re guessing the punchline is something that rhymes with “Track Place,” DING DING DING! I guess you were a designer on Leisure Suit Larry 5!

But we’re getting ahead of ourselves here. First, let’s ask the game what to do next by looking at these copies in our inventory.

Patti returns the folder to the desk, locks the drawer, puts the letter opener back on Krapper’s desk, and returns the key to the potted plant. And now, since the game doesn’t let Patti leave through the right door, she has to go into the left door, to Mr. Krapper’s (sigh) Crapper.

Mr. Krapper apparently has the greatest, most opulent and extravagant bathroom this side of creation. Apparently, he lives up to that old adage, “You Must Do Whatever It Is Your Last Name Tells You To.” I guess it could be worse for him.

I click all over the place, but to no avail. The only thing the game lets Patti do is take a shower in the booth on the left, because when trying to escape a hostile environment with incriminating evidence that can take down the people you stole it from, the only sensible thing to do is worry about cleanliness.

Patti takes her clothes off and drops them on the floor—which becomes a plot point, believe it or not—and proceeds to shower up (7 points). Or try to. Turning the faucet causes the chintzy little shower booth to descend like an elevator from the old Batman TV show. 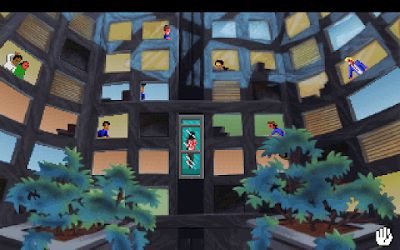 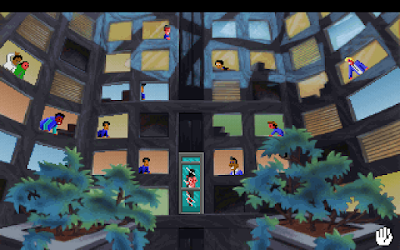 Relatively funny gag there, but that pun . . . ugh. Even by this game’s standards, ugh.

So Patti finds herself in the K-RAP studio basement level, where the studios are. She can see 2 Live 2 Screw in Studio A talking about something. Since I’d really like to eavesdrop and maybe even record this little palaver, I decide to explore these studios.

Of course, since Patti is naked and her inventory is lying on Krapper’s floor, I can’t walk anywhere. Good thing there are some rapper clothes hanging nearby! Patti snags them for one point and the ability to walk around unmolested. 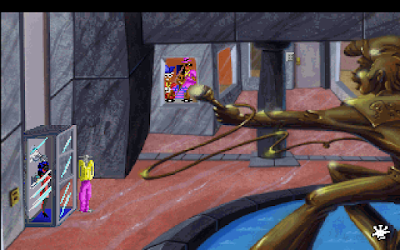 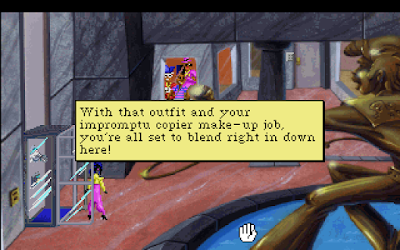 That’s right! As a plot point in a commercially released adventure game by Sierra, the main character walks around in blackface to avoid detection! Wow! I am not making this up!

And yet . . . and yet . . . although I know the ugly history behind black face and the minstrel shows that spawned this phenomenon (for non-American readers: performers in the nineteenth and early-twentieth centuries used to cover themselves in black makeup and play “black” characters on stage, completely overdoing all of the racist stereotypes about African-Americans) this is really too damn stupid to offend.

Anywho, an exploration of the studios reveals Studio B to be occupied by P.C. Hammer himself, and Studios C and D to be empty. Each studio, as well as the shower-elevator, have keypads. The only thing I can think of is to use the code found in Krapper’s desk on each door. The only one the code works on is the door to Studio C. 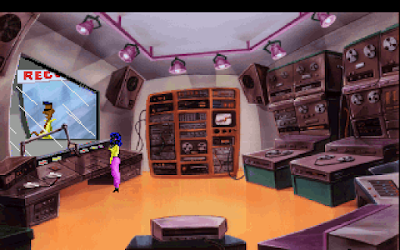 The only things Patti can interact with are the console on the left and the shelf in the back, which the “Eye” icon reveals contains some blank tapes. I sang one (4 points) and put it on the console. Nothing left to do but keep clicking “Hand” on the console until Patti gets the feed from 2 Live 2 Screw (8 points). I click “Hand” on the tape to turn it on and record the conversation (4 points), where the rap group yuks it up about doing nefarious things. I really feel like this was a missed opportunity to create a puzzle where the player would have to actually figure out what to do on the console themselves, but what do I know?

Clicking “Hand” again on the tape once the conversation is over makes Patti turn it off, rewind, and place the tape in her inventory (7 points). But just then, P.C. Hammer sees what Patti is up to, and moves a heavy boom mic stand that was out in the hallway and Patti couldn’t do anything with in front of the door, trapping her inside! He then goes to the elevator and punches a code which Patti, somehow, can see from all the way across the hall.

Oh well. Nothing left to do now but escape. This is another “just keep clicking, you’ll get it” kind of “puzzle” that this game is full of: “Hand” on the console makes Patti turn up the volume and move the microphone near her mouth. “Talk” causes her to belt out her highest note, cracking the glass and making an oh-so timely Memorex joke. She escapes (15 points) as the game engages in a little “tell, don’t show.” 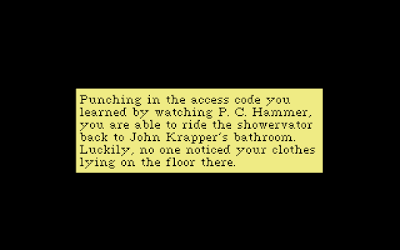 Patti tells her driver “Home.” Congratulations, this is the last Patti sequence of the game. Now it’s time for a boner joke! 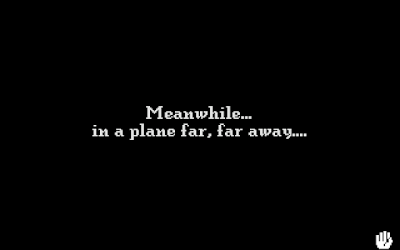 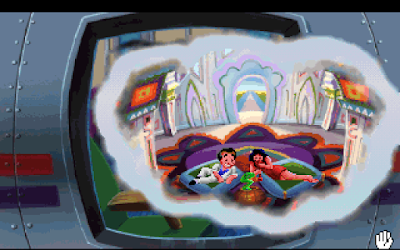 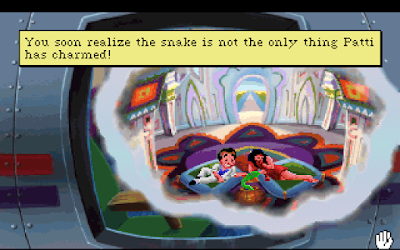 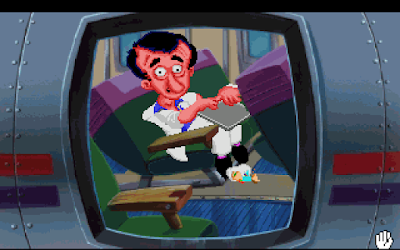 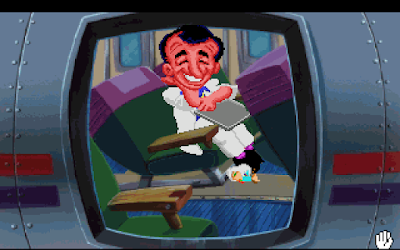 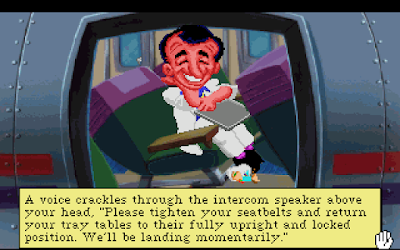 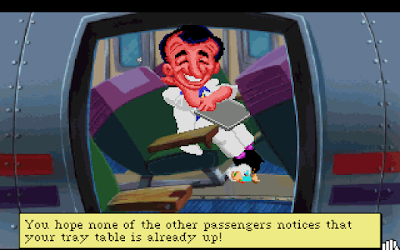 Oh brother. Between the racial insensitivity, the lack of puzzles, and the fact that, in order to do what the game posit Larry just did, he’d have to be packing a 15” member, I’m about ready for this one to be done. Stay tuned for Larry in Miami.