What puzzles? This game is impossible to lose, and as such, I cannot give it a higher rating than this. Here: I’ll show you. After getting all 1,000 stupid points in this stupid game during my initial playthrough, I proceeded to do an “As Little As Possible (ALAP)” run. Let me give an example of how this game goes beyond hand-holding into outright giving you the solution. See this? 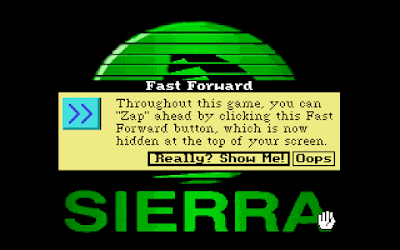 I think I forgot to mention this in my gameplay posts. It lets you skip parts of the game. Not just cut-scenes, but actual “puzzles,” as far as this game has any. Remember this part? 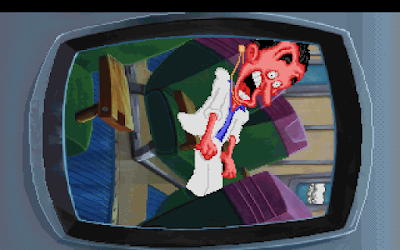 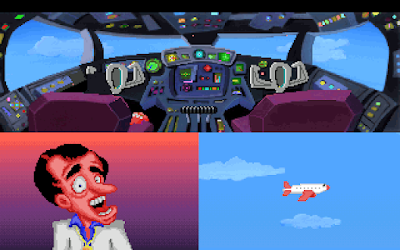 Remember how I wrote that:

“Here’s another blown situation for a puzzle. See the top portion of the screen? Just keep clicking ‘Hand’ and eventually Larry hits the autopilot button, saving the plane from doom (100 points). No puzzle, no brainpower needed, and no need for ANYTHING, since doing nothing causes Larry to run out of the cockpit in a panic and accidentally hitting the autopilot button, garnering him no points but still safely landing the plane.”

Or remember this part? As in, the final “puzzle” of the game? 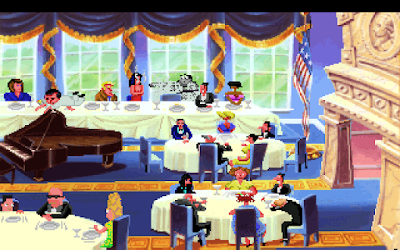 Just skip it and jump straight to the ending! You don’t even need to pick up the brasserie cannon way back in the FBI lab at the outset of Patti’s adventure, because Inspector Desmond just gives it to her during a cut-scene. 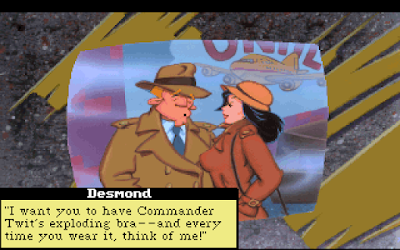 Sure, this eliminates a dead end, but why just not create a true alternate solution for players who failed to pick it up? Or better yet, make the player automatically get it at the beginning of the game, when it is shown to them and actually makes sense to pick up?

But I’m getting ahead of myself. Here is the Official Leisure Suit Larry 5 ALAP Run. All of the stuff you have to do to trigger certain plot points, and what you can skip.


Remember how at the ending, the game tells Larry that his efforts ultimately didn’t matter? Inspector Desmond tells Patti pretty much the same as she reports failure after failure.


Leisure Suit Larry 5 is the participation trophy of adventure games. It’s an adventure game for people who don’t like adventure games. There are no dead-ends, which is great . . . but it is impossible to lose or die. The tragedy is that, with a little tweaking, these puzzles could have been great! Some even have actual alternate solutions. For example, giving the maître d’ credit cards OR using the membership tape on the music cylinder to get access to the inner sanctum. Or renting the roller skates with the camera OR paying $500.00 in casino tokens. That’s how alternate solutions should be. Being allowed to repeatedly click “Talk” on a character in lieu of having the required item is not an alternate solution. Very disappointing for an otherwise well put-together and presented game.

﻿Interface and Inventory: 6
Much like with the Leisure Suit Larry 1 remake, the interface is easy to use, manipulating objects is easy, and the game went the extra mile in adding clever jokes when you try clicking inventory items on each other. As in, nearly every single item has a unique message when clicked on every other message. There are too many good ones to mention, but let’s just say it gave me an extra reason to click around in the inventory.

Story and Setting: 3
Oh boy. Let’s get this out of the way: Leisure Suit Larry 5 has a stupid story. Which would be okay, and even entertaining given some of the social satire going on, but the fact that it is of no consequence whatsoever really diminishes the entire narrative. Plus, there’s a blackface gag which, sure, is as innocuous as a blackface gag can get in that it’s not deliberately setting out to insult or demean African-Americans, but it’s still a bit much. The setting itself—various cities across America—is great, and the only thing that gets this category up to a three. The story prevents it from going any higher.

﻿Sound and Graphics: 6
Call me a hypocrite, but I think the graphical style works better in this game than it did in the Larry 1 remake. From the computer-inspired designs of the Hard Disk Café to the tacky gaudiness of the Tramp Casino to the overdone monstrosity that is the K-RAP studios, the game presents a myriad of different settings for the player to poke around in. If only there were, you know, puzzles to solve in these settings.

Sound-wise, this game is fantastic. The Leisure Suit Larry series has always had great music, and this game is no exception. I don’t remember a single bad track, and some, like the Hard Disk Café themes and tune Patti plays at des Rever records often get stuck in my head.

﻿Environment and Atmosphere: 6
I think both the environments and the atmosphere of Larry 5 hit the mark. The game is supposed to be a cheesy, risqué romp through some of the sleazier parts of the American landscape, whether that sleaze be sex-related, business-related, or politics-related. Crooked musicians, gangsters, scumbag Hollywood TV producers and yes-men coexist with an odd assortment of women whose only purpose really seems to get down and dirty with Larry. Okay, the female NPCs aren’t all that fleshed out, but let’s not forget that Patti is really the game’s only competent character. Larry lucks into and stumbles through everything. Patti—adventures in blackface notwithstanding—at least takes some agency through her solutions to the puzzles, and they tend to require more brainpower than just clicking “Talk” on a woman or giving her some random item.

﻿Dialogue and Acting: 6
This is another category I can’t fault. Messrs. Lowe, Mandel, and their team of writers have again packed this game full of bad puns, witty jokes, and all-around cleverness. Most of the gags hit their mark, seeming to go for a chuckle and a playful nudge on the ribs as opposed to being offensive or mean-spirited. Aside from that blackface gig. I mean, come on! As far as blackface gags go, that’s about as benign as you can get. But really? A blackface gag?

Aside from the narration, each character is well-drawn enough that their personalities come through from just a few lines of dialogue. Patti is skeptical and street-smart. Inspector Desmond is a square-jawed defender of truth, justice, and the American way. Lana Luscious is a Jersey tough-girl. Michelle Milken is a high-powered Wall Street type. Julius is an bloviating bore. And Larry is . . . well . . . Larry. And so on. Nobody is particularly deep, but in a game like this, they don’t need to be. 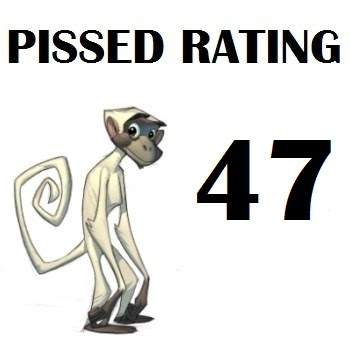 That seems fair, and a little higher than I would have expected. Ultimately, Leisure Suit Larry 5 has everything you want in an adventure game—good graphics, a great soundtrack, funny gags, clever writing, memorable characters and settings—minus what people in berets may call the raison d’être for adventure games: Puzzles. And that’s a pretty big omission. Tough luck, Larry. Better luck next time.

As for me, I get to move on to Police Quest III. Should I be happy to move on from Larry 5—as I think I’ve spent more time with this game than anybody else, God help me—or am I about to wade into even stinkier waters? My memories tell me the latter, but a guy can be optimistic, can’t he?