Kenny’s filthy notebook (with a frustrated looking smiley pulling out his own hair) legible page #10: Scotland Yard? I’m seriously disappointed with you guys. Don’t you solve crimes, serve the community & protect the people? Do I pay you taxes just so that I can say “Officers, arrest that man!” (even though that statement is totally badass and worth every penny to do it)?

Since Scotland Yard could not do anything to help, I went to Fisher’s house to find something that could get him off the hook that Hemingway had so brilliantly set him up for. I may not be able to incriminate the killer but I could still try to vindicate the innocent.

Dammit. This game is so time-sensitive; it worries me to no end that I may have missed out some time-specific events, clues and/or items. I’m sure that my waiting-around for things to happen in the last couple of days will come back to bite me in the arse and probably stick its long spiky tongue into my tender rectum.


I took a trip to Brighton and boarded the bus to Jumbles where Gladys lived to ask her about it but she remained tight-lipped about it. Beeyotch. Wasted 2 hours of my life. So, I just went back to sleep.

After a good night’s rest, I took a cab down to The Morning Star to meet up with Inspector Smart to see if my clues up till now are enough to warrant an arrest of Hemingway. 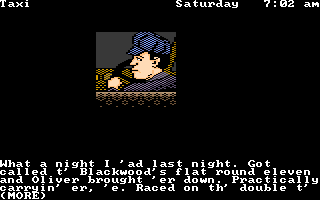 I guess I’m too early since Smart’s still not here. Might as well pick up the papers for the day while I’m at it. 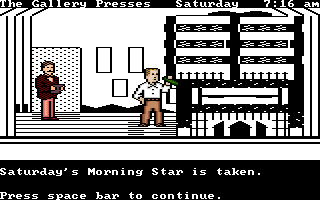 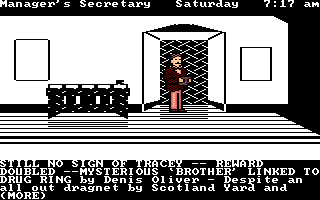 Arthur Potts is linked with drug smuggling, eh? Explains the amount of money he earns. Just as well that he’s promised to grant me an interview today. I’ll talk to him later. But, what’s this?

With time to spare, I made my way to Beryl’s home to check out if I could find any clues.

Oh Fisher, you sure act fast for someone so fat. Girl-on-top-like-bouncing-on-trampoline as usual? What does the girl have to say for herself?

Seeing that I could get nothing done here, I left for Southampton to meet up with Potts for the interview. Finally, I caught him at home around 9am and began questioning him.

Having exhausted all I could ask of Potts, I went to the pub in the vicinity and found a new NPC. Dammit.

See the following picture to prove that I ain’t bullshitting about that, mate. 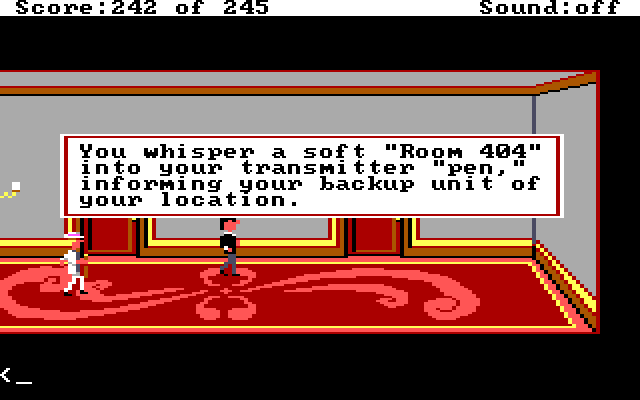 Is it a nod to Police Quest? I don’t know but I’m gonna talk to this guy anyway.

Oh, so he’s the cop who has been hunting Potts. Don’t worry. I may be a Master Thief but I ain’t no drug peddler. I may hail from part of the UK but I ain’t no colonial drug pusher

After finally unravelling my longtime suspicion of Potts and Geraldine, I made my way to Pyecraft to find out more about that crumpled note that Hemingway wrote

Once again, dead-ended, I went back to the Morning Star to meet up with Smart at the entrance.


Not sure if I could achieve anything, I showed him the Promissory Note I found in Fisher’s Office.


That definitely did not achieve anything. Perhaps if I confronted Hemingway directly in his own office?

Still nothing. I’m at my wit’s end. I made my way down to The Cheshire Cheese pub beside The Morning Star to drown my virtual sorrows. Redman was in there too, also drowning his sorrows.

And immediately after leaving that conversation, I suddenly received a telepathic message directly from my useless boss with a pathetic newspaper running with a financially unsound business model:


And that concludes my play-through. I might not have caught the killer, but I got a better job at The Morning Star with Hemingway as my boss and a pouch filled with gemstones. All in all, I’m set for life. Until I get stabbed in a phone booth in the (hopefully, far far) future.
Posted by TBD at 11:00