Finally, I can take off my rose-tinted glasses and start getting really critical on this game. I had fun while it lasted but that sudden ending really sucks. Do they have cellphones in the 1920s? Now, the gloves are off. Get ready for my punching, Telarium!

As an adventure game, The Scoop lacks the “use this on that” convention so widely and prevalently used by its contemporary peers. Instead, you use it to show it to people whom are most likely to have certain knowledge of these items to unlock more people you could ask about or even new locations. It is rather refreshing but lacks a certain action-y part that may endear it even further to adventure buffs. Since there is only one big puzzle to solve, I will have to be pretty harsh on this and give it a 2; 1 point for the murder and another 1 point for creativity.

Interface and Inventory
Its no-nonsense Interface is very clean and user-friendly. Inventory, however, is not sorted out in a more bird’s-eye-view manner and relies on the player to scroll through each of them one-by-one with the arrow keys. Serviceable but not astounding. What is great, though, is that there are no pixel-hunting nightmares. You only need to click the Search command followed by a Take command (if there is something to be taken) to grab your shit.

It’s written by Agatha Christie and 5 other accomplished mystery writers. That’s 6 writers. Repeat after me, S-I-X. Very good! Joking aside, this game is chock full of content. Each NPC have loads to say about one another and so many locations to visit that one could get lost in it. This is no easy feat for a game that has no stupid mazes to entrap players. 1 point for each writer!

The monochrome backgrounds do a good job in lulling you into thinking of an old-timey black-&-white noir thriller. Juxtaposing that with brightly-clothed characters that burst out of the screen that demand your full attention whenever they appear and you have a never-before-seen application of this pop-art style in this medium. It will not be until 1998 when we see a similar attempt in the Movies, Games & Videos sector. That said, the character portraits look horrible. Also, there is no music other than the little introduction ditty. Sounds are limited to the little steps your character make while walking and the screeching of tires made by taxis.

I’m a little torn here. On one hand, we have a huge gaming arena filled with many real-life locations. On the other, probably because of aforementioned pop-art style, the game gives a more Andy Warhol vibe rather than a Film Noir vibe. The locations fail to give me an “I was there!” feeling as I felt more alienated to the black-&-white background because of the characters’ colors.

This is where The Scoop truly shines. Each character has his/her own agenda. All of them are colorful, not only because of the graphics used, but because of their pronounced differences from each other. You only need see Fisher once to remember him as that Rich Fat Boy.

We have a nice round number of 45. Closest guess was Andy Panthro's. Congratulations! I’m off for a second run. This time, as a hot chick! 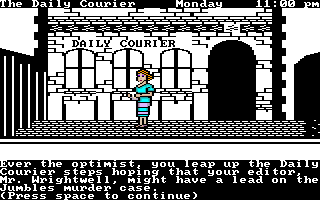 Posted by Ilmari Jauhiainen at 11:00