Missed Classic 4: The Scoop - Forgive Us Our Trespasses

Kenny’s filthy notebook (with several repeating lines of “SCREW WRIGHTLEY” scrawled in it) legible page #4: Ah! Sleeping is great! It’d be greater if there was a hot chick beside me when I wake up for some freshening up. Damn, I’m starting to sound like a dirty American!

Picking up from where I left off with this new game, I promised myself that I would not resort to do this again unless I actually die or dead-end myself. However, from what I recall, you cannot die until the time is up. How much time do I have then? I can’t recall but let’s get on with the show, shall we? I’m sure we’ll find out soon enough.

After waking up from a wet dream about some snuff film, it was time for the Inquest! I love quests! Conquest, Inquest, Outquest, me like ‘em all! Without further ado, I stepped out of my single room flat (that’s what UK and their Commonwealth colonial indentured serva- er… partners call apartments) of a bachelor pad. As expected, a search through my own abode turns up with nothing. I was fully hoping to find myself to be the killer Fight Club style. It’d be totally kickass.

I was about to hail for a cab but lo! There seems to be an Eastern exit in this screen. Travelling across it, you wouldn’t believe how coincidental and convenient it would be.

What better way to win the race than to foster a false friendship with him and dig out whatever he may know for my own mercenary purpose? It’s not honorable, sure, but I’ll bet Oliver’s thinking the same and would have done it if he grew a pair that are larger my gargantuan ones.

Upon entering his home, I found no one there. So he’s already left for the inquest? That slimy bastard. Fine. Since, I’m already certified to be a trespasser, I might as well make the most of it.

I immediately made my way to the Victoria Station and took a train down to Brighton as fast as I could. When I reached the courtroom, who was there but Denis effing Oliver, I knew you were fast, you bastard, but damn are you a squiggly one.

And then, finally! The first woman in the game! I almost thought that I had wandered into a Hercule Poirot novel. The lady goes by the name of Amethyst Manwaring. Look at those low-res hooters, guys. Look at them.

Anyway, to follow through with my plan to steal Oliver’s thoughts by forging a relationship based purely on insincerity, lies and possibly even some homoerotic sexual tensions, I initiated my conversation but…

That’s the way you wanna play it, Oliver? You want to know just how low and childish a man can go when he can’t get what he wants?

In your face, my good neighbor! I’m reading your goddamn journal right in front of you and you can’t have it! Neener neener! Oh wait. Inquest’s starting. 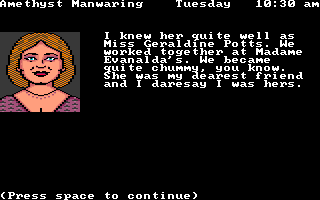 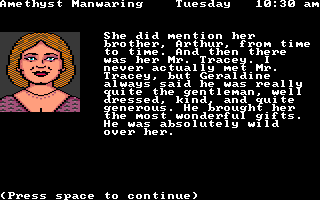 Moving over to the Anteroom, my eyes almost bled from the clash of colors between that new character against the monochrome background. He’s so in-your-face that I seriously doubt that he’d be the killer and immediately struck him off my suspect list even before I could put him there.

I can almost smell Fisher’s fingers full of Geraldine’s fishy poontang pie from this side of the screen. He has a shop up in North Street? I’m gonna pay you a visit. Or rob you if you’re not there. Like what I did to Oliver, that little arrogant turd nugget. 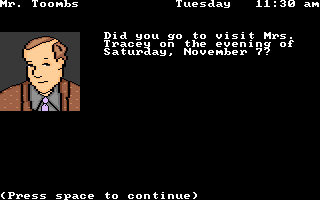 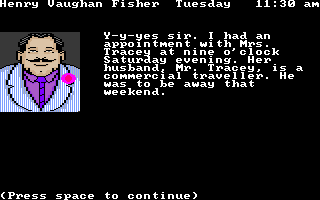 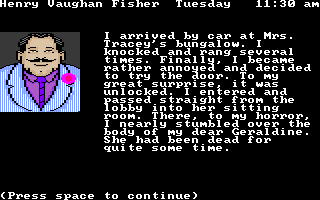 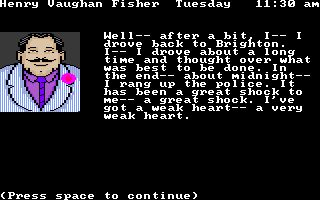 Yea, a weak heart from all that cholesterol, I presume. Hmm… I will have to ask Fisher where this Geraldine and her husband lives. I’m sure I can find more clues for the first murder than the subsequent ones. It’s always easier to track a killer by finding his first mistakes than to spot for new ones in his later killings after he has gained all that confidence and experience to remove evidence.

Killers are like D&D Wizards. They suck at Level 1 but they’ll rip (out your innards) at Level 9. Anyway, what Oliver said to me reminded me of something. This game allows me to tail someone and even request a cab to follow anyone. Once again, a game mechanic that no other Adventure game has that is not part of a cut-scene. This game is so open and the more my character knows, the bigger it becomes.

What am I gonna do first? Stay tuned, adventurers!
Posted by TBD at 23:00