So You Want to Ask a Hero?

Since I created The Adventure Gamer blog, lots of unexpected things have happened. The blog was initially just a way for me to scratch an itch that wouldn’t go away, but since then it’s evolved into so much more! There’s now a growing community with a points system, a game selection process and a regular “get to the know each other” post. I’m already very excited about the direction it’s taking, and who knows where the blog will go in the coming months and years. Why am I pondering all this today? Because today marks another milestone for The Adventure Gamer blog!

I’ve received an email from an important figure in the game development community. Not just any game development community mind you. This individual played a big role in the creation of one of the greatest adventure game series of all time. In fact, when I read through the many What’s Your Story post responses that I have in the backlog, it’s clear that many of you think the series in question is the pinnacle of the genre. That series is Quest for Glory! The email came from game programmer Corey Cole, husband and partner of game designer Lori Ann Cole. Not only were the Cole's the brains behind the Quest for Glory series, they also designed Shannara, an adventure game based on Terry Brook's series of books, for Legend Entertainment. 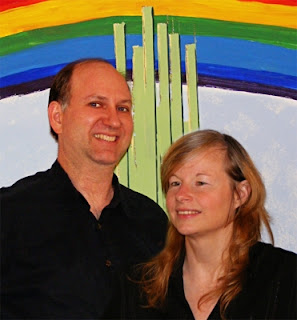 Corey actually tried to comment on the Manhunter introduction post without success for some reason (if anyone else has had trouble posting comments, please send me an email). I sincerely hope he tries to comment again, as his involvement in the community would be amazing. In the meantime, he has given me permission to repost his comments.

“Manhunter: New York came out in mid-1988.  Since the SCI engine was still under development at that point, it was not stable enough for an outside developer.  Gold Rush came out in 1989, but also used AGI.  Sierra reserved SCI for in-house development.

Back in 1988, Sierra simultaneously developed KQ4, LSL2, SQ3, and PQ2 along with the final stages of SCI development.  My first job at Sierra in 1988 was converting SCI to run on the Atari ST, so we got those versions out shortly after the DOS release.

If I remember the chronology correctly, the LSL2 and SQ3 teams moved over to KQ4 to help get it out on time, but PQ2 continued simultaneous development.  As soon as KQ4 went into production, everyone switched over to LSL2, and got it out about a month later.  So KQ4, LSL2, and PQ2 all made Christmas.  SQ3 was pushed back to Spring 1989 - MobyGames says it shipped in March.

I’m looking forward to seeing what you and CRPG Addict have to say about Hero’s Quest when you get to it.  Of course, given the number of games that shipped in 1989, that might take a while.”

So that puts a few of my chronology questions to rest. He then followed that comment up with another:

“I remember playing Manhunter and Gold Rush, as well as some early King’s Quest games, early in my Sierra career.  That would most likely make it 1988, the year I started there, but it could have been 1989.  A few years later, management had me play “Keeping Up With Jones” and make a recommendation.  I liked it, and the company decided to remake it as “Jones in the Fast Lane”.  I actually liked the original a little better – It was basically a board game with primitive graphics, but had an elegant simplicity of design that reminded me of the original Careers board game.  (They remade Careers and dumbed it down; I don’t care for the current version.  The version I played as a kid was really well balanced.)”

I rather cheekily asked Corey if he would be willing to answer some questions and he answered in the affirmative. I thought the best way to do this would be to put our heads together as a community and come up with a few questions we'd like to ask him. May the suggestions begin! Before we do that though, I should point out that he's already answered one of the obvious ones I had in mind.

“No, we aren’t working on a Kickstarter project yet, but we’ve been watching the trend with interest and might do something a little later on.”
Posted by The Trickster at 13:52